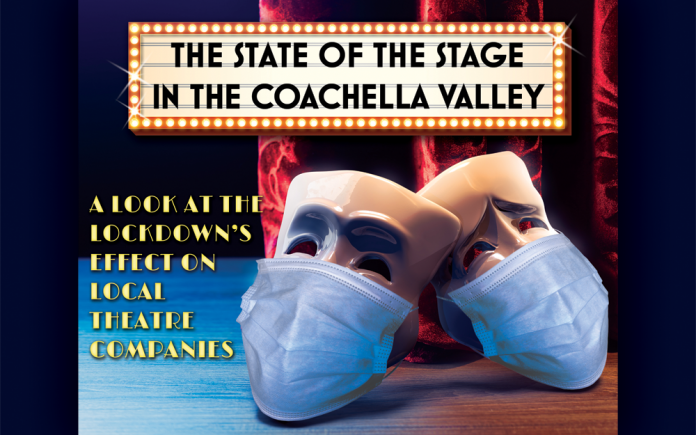 The tradition of dimming the lights on Broadway began in the 1950s. It was reported that house lights in all Broadway theaters were first dimmed in honor of Gertrude Lawrence, who died of viral hepatitis at age 52 in September 1952 while she was starring in the Broadway musical “The King and I.” It continued in honor of the passing of Broadway greats. The ceremony is brief and precise. On a show night just after the deceased has passed (usually a little more than 24 hours passes between the death and the dimming), exactly at curtain time—usually 8 PM—the lights of all the Broadway theatres are shut off for a full minute. No announcement is made, aside for a press release issued by the Theatre League prior to the event. The lights then go up, and the show goes on.

On March 12, 2020 at 5pm, Broadway theatres went dark by order of New York Governor Andrew Cuomo. They have yet to go back on and are hoping for a June reopening.

Along with Broadway, theatres across America dimmed their lights, including stages throughout the Coachella Valley. It is near impossible to envision a world where theatre (or any art) is deemed non-essential. Even in matters of life and death, we all seek escapes and comfort from stories and performances that reflect our world views, our dreams, fantasies, horrors and realities.

The state of dark stages in the Coachella Valley, just like with many businesses, has left those whose lifeblood creates the magic, without incomes or the ability to plan their futures. When asked about current struggles with the theatre blackout, Se Layne, Co-Artistic Director, and the creative force behind many of Palm Canyon Theatre’s (PCT) productions, stated that, “We still have bills to pay, but no shows means no income. We have to pay for production royalties in advance, in order to secure them for next season. Being dark without any revenue stream or active fundraising, makes planning and paying for next season extremely difficult.”

Jerome Elliot, Artistic Director for the Desert Ensemble Theatre Company, (DETC) indicated that “we were only halfway through our season on March 12, and a day away from opening ‘HOW TO SURVIVE AN APOCALYPSE.’ We incurred a severe financial blow because all production expenses had occurred prior to opening. Once we shut down completely, we also paid our designers, actors and director in full for the incredible amount of time they had worked on the play. There was not a huge presale (typical for most of our productions), so this meant a large net loss on the production. We had hoped to postpone just for a week, but the California statewide shutdown went into effect March 20. This meant cancellation of our entire season, including “APOCALYPSE” and “MAN & WIFE,” which was to open in April.”

Coachella Valley Repertory’s (CV Rep.) Artistic Director, Ron Celona shared that at the top of their current struggle is “Keeping the doors open. A year ago, CVRep purchased a huge building complex and built a 208 seat theatre. We are still paying off the bridge loans that helped to make that a reality, plus we have a mortgage, and monthly overhead. We had to lay off our part time employees and our full-time employees took a 25% pay cut. Like all non-profit theatre companies or arts organizations, we rely on community support.”

Green Room Theatre Company’s (GRTC) Artistic Director, David Catanzarite, stated that though they were able to complete their 11th Season with a successful production of August Wilson’s “Fences,” they were forced to postpone their annual Coachella Shakespeare Festival production of EQUIVOCATION, directed by Adina Lawson. They hope to present that in November.

Theatres depend on ticket sales, advertising, fundraising, patrons and most importantly- audiences, all items which are in short supply when the stages are dark. Though volunteers are greatly appreciated, theatres employ professionals on every level, actors, directors, producers, light, sound, set designers. Costumers and choreographers, hair and makeup artists. It’s a business that provides food for the soul and provides support for many artists. Unfortunately, most theatres have had to let go of staff during this time.

Layne, revealed that “it (theatre) is in our blood to perform, so not having that outlet to entertain is a psychological struggle for many of us.” Celona, seemed to agree, “(It’s) not always easy, but it’s so important because although isolation is hard for most everyone, its especially hard for theatre people, since it’s all about congregating and sharing life experiences both on and off the stage.”

Despite the hardship of the economic shutdown, these theatre artists all seem hopeful about their summer plans and upcoming seasons. Elliot, revealed that, “If all returns to normal—or anywhere close to normal—we are planning a full 10th Anniversary Season. That includes our annual opening musical Gala in mid-autumn; plus, three productions from January through April. We have programmed all but one slot for next season and we hope to select the final play within the next few weeks. The season announcement and an audition announcement will be made when we have a clearer picture of the easing of restrictions.”

Celona, stated, “At present, our plan is to open our 2020-2021 Season on November 1, 2020. Our theme, Survival & Resilience! We will bring back CITY OF CONVERSATION by Anthony Giardina to complete its run that was cut short due to the closure of the theatre this past March. Then in December, we will present our Youth Outreach Production, BULLY, IT’S THE FIGHT OF HIS LIFE written by and starring, Lee Kaplan for school students who are bussed to CVRep free of charge.

In January, we will present our musical production (TBA), followed by a play, BAKERSFIELD MIST by Stephen Sachs in March and close out our season in April with NATIVE GARDENS by Karen Zacarias which was originally scheduled for this past season. We will also re-open our Conservatory in the Fall which was also cut short with the closure. We have to sort of start over with limited classes and then build as we grow.”

Palm Canyon Theatre, has announced their 2020/2021 season, dates to be confirmed later:
“ANNIE”
Del Shores’ “THIS SIDE OF CRAZY”
“ELF”
“HOW TO SUCCEED IN BUSINESS WITHOUT REALLY TRYING”
“SPAMALOT”
“YOU’RE A GOOD MAN CHARLIE BROWN”
“CYRANO DE BERGERAC”
“INTO THE WOODS”
“GODSPELL”

Layne also shared that “As soon as we can re-open and start a production, we’d like to, even if that means doing so with social distancing in place. We would like to run our Summer Kids Camp, as we have for 23 years. We usually have about 100 kids, ages 6-17 participate in the theatre camp that teaches acting, dancing, improv, stage combat, makeup, and more 5 days a week, from 9 a.m.-4 p.m. We are planning for our kids’ summer production to be High School Musical. We think that kids are anxious to get together again and dive into this creative outlet. But, running camp will depend on regulations. If we can’t run our camp live, we may look for alternate ways to engage kids online.”

Catanzarite, indicates that they are collaborating with long-time partners at Palm Springs Women in Film and Television (PSWIFT) to offer some online classes for our children and young adult students. This may add Acting for the Camera, Hollywood Audition/Making a “Demo Reel”, and Making the Short, Short Film. He states that, “GRTC is uniquely positioned for a transition to this kind of online instruction; our core staff is comprised of artists who are also veteran credentialed teachers; they are already mastering distance learning techniques in order to complete the current school year.”

Ophelia Internships: Green Room Theatre Company is also launching three new arts education internships for advanced students who need paying work. By the fall semester these may continue through the Career Center at CSUSB/Palm Desert Campus and will have funding for two additional summer internships, sponsored by PSWIFT to be awarded to girls from the Ophelia Project.

If you are in a position to buy season tickets for the upcoming year, donate, hold off on asking for refunds of cancelled shows, anything that will support the theatre arts during these challenging times, it will no doubt be appreciated.

The lights on the Broadway and Coachella Valley stages will shine bright again thanks to the dedicated theatre artists who create the magic and the audiences who support the arts!

Dee Jae Cox is a playwright, director and producer. She is the Cofounder and Artistic Director of The Los Angeles Women’s Theatre Project.
www.losangeleswomenstheatreproject.org – www.palmspringstheatre.com