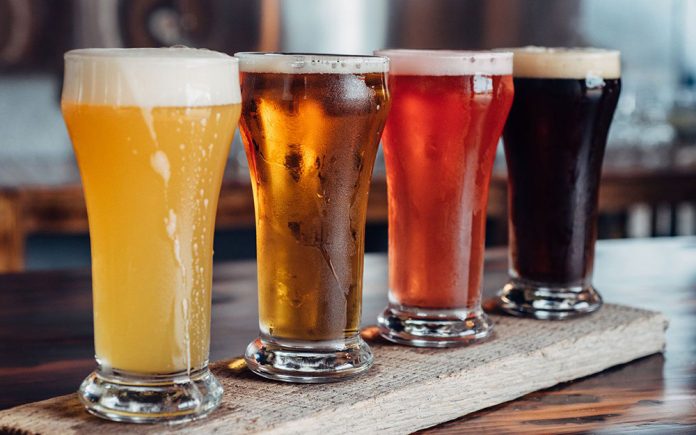 Memorial Day weekend started me thinking about traditions, and as an older brewer my thoughts drifted where they always seem to go…to beer. Last week we began the deep dive into the twenty most influential American craft beers ever brewed based on my 29 years in the industry.

This list is entirely mine and reflects my opinion only. Rebuttals and suggestions are encouraged and my email address appears at the end of every column. This week we will tackle the second five starting with number fifteen. Last week’s list may be seen at the end of the column.

DBA is often regarded as an iconic Firestone Walker brew and is the beer which put the Paso Robles brewery on the proverbial map. Double Barrel Ale was the first beer ever brewed by Adam Firestone and it became an overnight sensation. This three-time Gold Medal winner at the Great American Beer Festival serves as an enduring tribute to traditional cask-fermented English ales with west coast carbonation.

Partially fermented in Firestone’s Union oak-barrel brewing system, this brew focuses on deep malt flavors with just enough hopping to bring the brew to a perfect balance point. Pale malts create a smooth midtaste with ribbons of caramel, English toffee, and toasted oak. Definitely worth revisiting if you haven’t had one in a while.

When Greg Koch and Steve Wagner founded their Vista, CA brewery in 1996, their goal was to produce flavor-forward brews with no apologies given. Greg wrote the verbiage on the bottles back then, so let’s revisit the Arrogant Bastard label:

“This is an aggressive ale. You probably won’t like it. It is quite doubtful that you have the taste or sophistication to be able to appreciate an ale of this quality and depth. We would suggest that you stick to safer and more familiar territory–maybe something with a multi-million-dollar ad campaign aimed at convincing you it’s made in a little brewery, or one that implies that their tasteless fizzy yellow beverage will give you more sex appeal. Perhaps you think multi-million-dollar ad campaigns make things taste better. Perhaps you’re mouthing your words as you read this.

Arrogant Bastard debuted in November, 1997 and was scheduled to be a one-off production. The fact that it is still with us now shows just how worthy we as beer consumers have proven to be. Another gem worth revisiting soon!

Pierre Celis, widely considered to be the Father of modern Witbier, founded what was to become the famous Hoegaarden Brewery in Belgium in 1966 and singlehandedly resuscitated a nearly dead style. Pierre moved to Texas in 1992 and started a tradition kept alive by his daughter Christine and his grand-daughter Daytona at Celis Brewery 2.0.

Brewed with only the best ingredients, Celis White is a light and hazy yellow wheat beer, ideal for sipping year-round in the desert. An easy-drinking session beer laced with flavors of orange peel, spice and coriander, Celis White allows you to take a step back in time and enjoy the original recipe the first Witbier.

Sierra Nevada Brewing has been producing its own holiday IPA since 1981 and it’s always nice to see their Celebration IPA hit the shelves in early November. This absolute seasonal classic is welcomed by beer aficionados all over the country.

Re-branding is the buzzword in beer and Celebration Fresh Hop IPA (its new name) replaced the Celebration Ale moniker after 39 years. Each year, the brewery visits the Pacific Northwest to hand-select the best Cascade and Centennial hops at harvest time…and then the clock is ticking. The newly picked hops are raced back to the Mother Ship in Chico to make Celebration IPA. Speed is of the essence and the brew is readied as the hops arrive in an effort to capture their citrus, floral, and pine notes at their absolute peak of flavor and freshness.

Brewing with fresh hops is a luxury afforded to brewers once a year and Sierra Nevada certainly takes full advantage of the limited opportunity.

Pliny the Younger appears on our list at #16, so it makes some sense that the Elder would rank somewhere above it in terms of importance. Pliny the Elder is often regarded as one of the very first Double IPA’s to hit American soil when it made its debut back in 2000 at the first-ever Double IPA Festival in Hayward, CA.

This stalwart blends Amarillo, Centennial, CTZ, and Simcoe hops for a potpourri of floral, citrus, and pine notes. Even though it’s been around for twenty two years, it has a flavor profile that is still chased by younger brewers today.