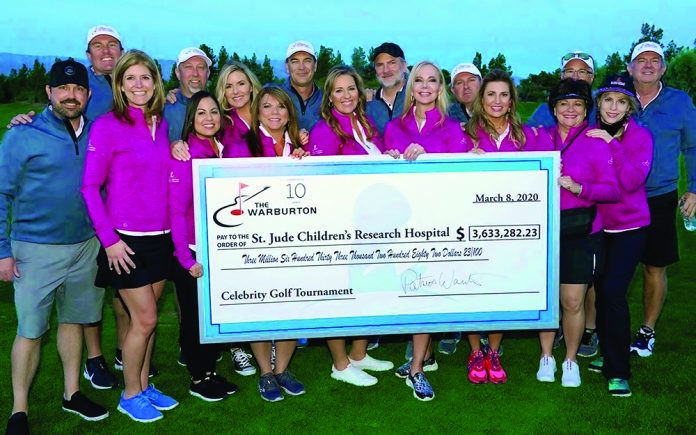 Total raised since inception in 2011 is $15.6 million, making the Coachella Valley event the largest fundraiser of its kind for St. Jude nationwide

It has been announced that the 10th anniversary of The Warburton raised a staggering $3.6 million for St. Jude Children’s Research Hospital, bringing the total raised since the event first kicked off in 2011 to $15.6 million. This makes the Coachella Valley-based event the biggest golf tournament fundraiser for St. Jude in the country. St. Jude Children’s Research Hospital® leads the way the world understands, treats and defeats childhood cancer and other life-threatening diseases.

The Warburton brought in more than 75 celebrities, songwriters and rock legends for a weekend of golf and one-of-a-kind music events. More than 800 supporters attended the Thursday Songwriters Night on March 5, as well as the Saturday Soireé on March 7, and participated in the golf tournament Saturday and Sunday, March 7 and 8 at the Classic Club and JW Marriott Desert Springs. The number of attendees jumped to 1,200 for the popular Friday night Rheneypalooza Jam featuring rock legends and hall-of-famers on March 6. Many guests travel from around the country to be part of The Warburton, and hundreds of locals joined the fun of the evening music and dinner events.

Tournament host, actor Patrick Warburton, perhaps best known for playing Puddy on Seinfeld as well as the star of the syndicated sitcom Rules of Engagement, and the voice of Joe on Family Guy, said the weekend exceeded everyone’s expectations.

“We are blown away by the generosity we have seen this weekend, and to have raised over $15 million for St. Jude since we started is beyond anything we could have imagined when Chairman Clarke Rheney and I first brainstormed about creating an event to support St. Jude when we golfed together at the Schulz Celebrity Classic back in 2010,” said Warburton, who co-hosts the tournament with his wife, Cathy.

The Saturday Soiree red carpet gala offered guests the opportunity to bid on 269 silent auction items and 11 live auction packages as well as contribute to the raise-the-paddle Give to Live portion of the evening. They also heard from a local patient mother, Kristen, who shared the story of her daughter Natalie, and how after receiving the grim prognosis of a 20% survival rate for the type of brain tumor Natalie was diagnosed with – and at one point was even planning her baby’s funeral here in Palm Desert – Natalie became a St. Jude patient and is now a 13-year-old survivor attending a local middle school in the Coachella Valley.

“We have so many people and businesses that have been strong supporters – many of them involved every year since the beginning, and we could not do what we do without them as well as our locally-based Board of Directors that puts in hundreds of hours each year to put on these events,” said Clarke Rheney, Tournament Co-founder/Chairman and St. Jude’s 2017 National Volunteer of the Year. “St. Jude is in all of our hearts. It’s incredible to have a place that is curing children who have cancer and other rare and life-threatening diseases – all while never sending a patient bill, covering all their travel and living expenses and conducting research that has boosted the overall childhood cancer survival rate from 20 percent to more than 80 percent since it opened more than 50 years ago.”

The Warburton is the top highest grossing golf tournament for St. Jude Children’s Research Hospital nationwide, raising more than $15 million for St. Jude since its inception. For more information or to purchase tickets, visit thewarburton.com.