The general consensus is that the year 2016 has felt like an unrelenting shit-storm. From beginning until end we have been inundated with death, (from David Bowie and Prince to George Michael and Carrie Fisher, now Debbie Reynolds, R.I.P.), and disappointment, (there’s a lumbering Oompa-Loompa headed to 1600 Pennsylvania Avenue, despite the will of the people). To paraphrase Shakespeare, we have fully entered the winter of our discontent. There’s no turning back.

Thank God for music. Seriously, it can get you through the toughest days. Discovering a new song our band to love can make almost anything bearable.  That’s where the Well Wishers’ Comes And Goes album comes in.

The Well Wishers aren’t exactly new, they’ve actually been around since 2003, releasing seven studio albums and a five song EP. In fact, the band isn’t really a band, but the brainchild of Rock N’ Roll Renaissance man Jeff Shelton.

Growing up in Laguna Beach, Jeff didn’t really pick up a guitar until he was 18, but he mastered it pretty quickly and began writing his own songs.  Pursuing higher education in San Luis Obispo, he cycled through a couple of bands; mild-mannered college student by day, budding Rock Star by night.

Once he completed matriculation, Jeff made the Bay Area home and connected with kindred spirits, drummer Dave Friel and bassist Doug Free. Together they formed the Spinning Jennies in 1993.

Gigging around San Francisco, the trio built a loyal following and the original line-up recorded two albums before Dave Friel split for not necessarily greener, but different pastures. Nick Laquintano took his place behind the kit and remained there for the Jennies’ near decade long run.  After five albums, the band called it quits in 2002.

Rather than carve out a path as a solo artist, Jeff opted to conceal his identity (like a super hero). He wrote, played, sang and recorded everything himself, but presented it as a band effort.  As the Well Wishers he released Twenty- Four Seven in 2004.  The album hit the sweet spot between British Invasion crunch and the tart melodicism of Power Pop.

The Rock cognoscenti took notice and the Well Wishers began to cultivate a healthy following.  Over the next decade, Jeff produced new music at a furious clip, recording a new album every couple of years.  Under The Arrows arrived in 2005, then, How I Won The War in 2007. Jigsaw Days appeared in 2008 followed by Post Modern Romantic in 2010. 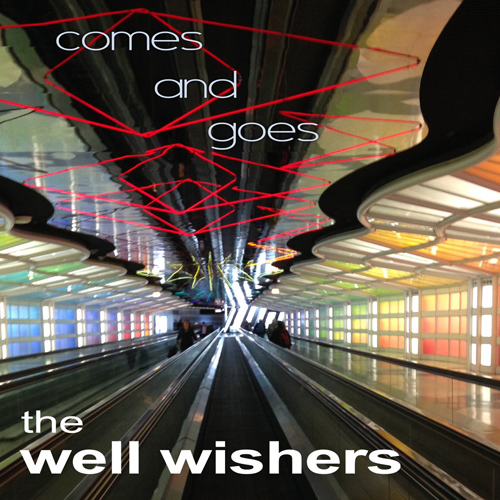 Two years later, Dreaming Of The West Coast came out.  Soon after came the Dunwoody EP in 2013, and then A Shattering Sky in 2014. Now the Well Wishers return with their eighth effort, Comes And  Goes. It opens with the one-two punch of “Impossible To Blame” and “It’s On.”

Downstroke power chords, rubbery bass lines and a punishing back-beat greet the listener on “Impossible…” The succinct lyrics reevaluate an erstwhile love affair; “So many years you been on my mind, but I can’t remember all the reasons love died.” A cyclonic guitar solo on the instrumental break mirrors the lyrics’ chaotic mix of emotions.

As the final notes of “Impossible…” recede, they’re supplanted by prowling guitar riffs and marauding bass fills of “It’s On.”  Jimi Hendrix once famously asked “is this love, or just confusion?” The Well Wishers seem to be facing the same dilemma. Over bendy, Guitar-Hero pyrotechnics, equivocation is the name of the game; “And I wouldn’t be lying if I said my love was running out the door/And you wouldn’t be wrong just to say straight up ‘I can’t take it anymore.’”

A plethora of musical influences are evident on Comes And Goes. The early ‘80s are well represented on “Somebody Lied;” A combo platter that serves up space-age synths, a pummeling percussive attack, see-saw bass and staccato riff-age. It plays out like an unholy alliance between A Flock Of Seagulls and Billy Squier. It’s an unexpected fusion that is surprisingly potent.

On “Tomorrow” menacing bass lines fold into a tick-tock rhythm and chiming ‘60s- style guitar. Coming across like an emotional Eeyore, the protagonist on this song attempts to wash away a pessimistic past; “I used to be the one to live in sorrow, I used to be the one who said I’d wait until tomorrow.”  A spitfire guitar solo on the break pivots and pinwheels, reflecting lyrics’ ambiguity.

Meanwhile, a driving backbeat and sparkly guitar undercut the misery and dashed expectations on “Love Lies Last.” Gorgeously multi-tracked vocals almost distract from   dire couplets like “The two of us lie awake at night, with the suicide of the morning light/Our world is spinning out of control.” Bookending the track is an extended instrumental coda that blends a Keith Moon-style bludgeoning beat and shapeshifting guitar that goes from gritty, to searing, adding hints of feedback and reverb before winding down.

The best tracks here are “Three Nights In Bristol” and “Get On By.” The former shares some musical DNA with the Blondie Power-Punk classic, “One Way Or Another.” Anchored by stripped down guitar, stutter bass lines, rapid-fire handclaps and a triple-time rhythm, it builds to a manic crescendo before shuddering to a halt.

Ricochet riffs collide with a rollicking backbeat on the latter. The lyrics resolve to fine-tune a faltering relationship; “I’ll give it a rest, I’ll give it a kick in the ass/Whatever you think moves the needle down to something more profound, I’ll give it a try.”

The action slows a bit for three songs, “Comes Around,” “In Love With” and “Nobody’s Dancing Alone.” If it were possible for XTC, the Church and Let’s Active to make a musical baby, it might sound like “Comes Around.” Jangly acoustic riffs give way to angular electric notes over a mid-tempo rhythm.  Even lines like “I’m lost in the grind, would you comfort me with some peace of mind/It’s obvious the end of the line is a starting point,” are tempered by the infectious melody.  Some distaff perspective is added when Jeff trades verses with guest vocalist Lisa Mychols.

Lush and shimmery acoustic guitars ripple, powering piquant melody of “In Love With.” Over a metronome meter, the lyrics split the difference between halcyon nostalgia and an obligation to seize the day.  This cautious carpe diem echoes the effortless pure pop of bands like the Beatles and Badfinger.

The buoyant melody of “Nobody’s Dancing Alone,” nearly camouflages lyrics that denounce our accelerated, anonymous culture.  Lines like “Nobody sees me-nobody listens, it’s all a race to the end” are leavened by incandescent acoustic arpeggios and Jeff’s plaintive vocals. In the end, the need to connect overpowers the collective ennui; “And it’s so long out of my senses, I rewind all of my defenses/And call that bluff until nobody’s dancing alone.”

The album closes with “Nature’s Son.” Dense and sludgy, it’s accented by swirling, multi-tracked harmonies.  The track steps away from crisp, Power-Pop songcraft that characterizes the album. Instead, it veers toward the darker hues of Punkier antecedents like Husker Du and Dinosaur, Jr.; an intriguing finish to an adept collection of songs.

Not only does Comes And Goes echo classic sounds from bands like the Raspberries and Cheap Trick, it also conjures memories of lesser known lights like the Sneetches and The Pursuit Of Happiness. Even better, each listen reveals richer layers and new, vibrant textures.

Digging into this album might not wash away your sadness or assuage your fears, but hopefully it will help you forget. At least for a little while!