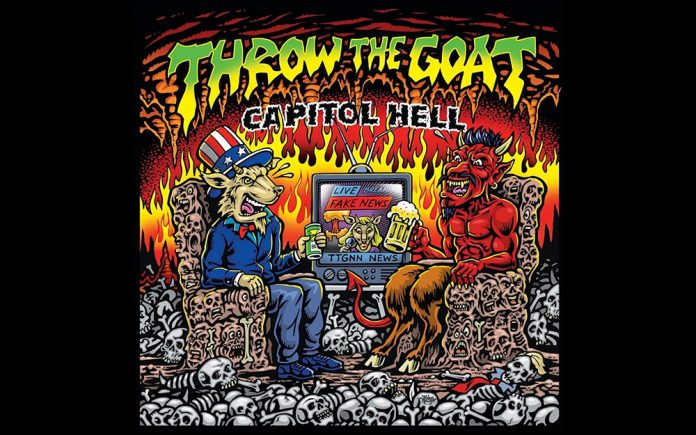 At times it seems that we are living in the center of purgatory with COVID-19, unchecked racial injustice and the political firestorm that is the election looming on November 3rd. With that being said, Throw The Goat will help liberate us from ‘Capitol Hell’ on Friday, October 30, 2020, with the release of their new full-length album by the same name on Regurgitation/Combat Records, the legendary Metal label relaunched by Grammy-winning Megadeth bassist David Ellefson.

According to the ever-trustworthy Wikipedia “goat throwing” was a practice celebrated by a festival held in Spain where a group of young men would throw a live goat from the top of a church based on local legend. A crowd below would then catch the falling goat with a canvas sheet. It’s since been banned but the legend states that a goat, which miraculously fed the poor with its milk, fell out of the tower, but landed safely. The band from Idyllwild, California, TTG, like the legend, is feeding its fans with its version of pasteurized pandemonium that continues to receive the appropriate praise and recognition. The triple threat ensemble that is TTG is making its own mythological saga through their inventive Thrash/Metal/Punk sound.

To celebrate the release of ‘Capitol Hell’ there will be a private live stream that can only be accessed by pre-ordering the album at www.votegoat2020.com/pre-order or www.throwthegoat.bandcamp.com.

On Halloween the band will have its Official ‘Capitol Hell’ Listening Party at Coachella Valley Brewing Co. in their CVB Beer Garden where you will have the opportunity to listen to the album in its entirely and meet the band! Costumes are encouraged and masks and social distancing are a requirement. CVB and TTG will be presenting prizes for the ‘Best Costume’.

Exclusive and delectable food will be available on-site from KUMA Catering.

Also available on tap will be Capitol Helles, the joint effort brew between CVB and TTG.

Before we get to the review, let me say that each member is feverish on ‘Capitol Hell’. There’s no need to indicate standout performances on each track as the entire album features each of the trio at their best.

Here is the CV Weekly album review of ‘Capitol Hell’.

A toddler counting petals from a flower from 1 to 9, then an adult male counting backwards from 10 to 0 counting down to an atomic bomb explosion. This political commercial endorsing President Lyndon B. Johnson fittingly introduces us to ‘Capitol Hell’.

The first single and video. In true TTG fashion, the video incorporates a message to the status quo that is politics. Dressed in superhero masks and capes, the band forge ahead to point out to those in power that, indeed, the power lies with the people; Parnell insists, “I’m one of the good guys!”. A majority of the video was filmed atop Highway 74 and features the Coachella Valley as a backdrop. The concept of the video is a reminder that we should all look beyond ourselves to see the true tragedies that are taking place. The song itself is a wonderful mix of Metal, Punk and Rock; just Heavy Music.

The second single and in my top 3 on the album. The video is something else. If you believe in the mystical relationship between numbers and the success of TTG, you are sadly mistaken. ‘Don’t Believe’ is a return to the birth, blood and sound of TTG that delves into the secret world of conspiracy theorists. The elaborate video for the song only confirms that TTG are imaginative and thought-provoking and not schizophrenic. Its seizure-inducing splicing of frames from FBI agents to Bigfoot to JFK to 9/11 to alien autopsies to COVID-19 provide a confidential observation of the unglued stargazers we give heed to during unique occurrences.

My favorite song on the album thus far, a heavy Metal intro that could have been the theme to Headbanger’s Ball. I’m certain Mr. Ellefson undoubtedly put his rubber stamp on this one with pride and joy. “Drum kits And riffs galore, Heavy guitars, And fucked up vocal cords, We’ll never quit, This is a war, How ‘bout some more Four on the floor”. It’s a Ministry and Megadeth sounding collusion at their best.

Syncopated drum and bass intro leads to Blues guitar riffage. This song conveys the impression of a Tony Robbins-penned track; a song about self-esteem and instilling confidence in a kind of self-Coup d’état. “Because you don’t, Know your worth, It’s your curse, Love you first, You’re worth the time.” If you didn’t know TTG had a sensitive side, now you know.

You do not want to be sedated for this song. It’s as velocious as any song on the album. I love the chorus, “Anarchy, Finding peace in perfect perfidy, Anarchy, You and I will try to find a way”. For TTG the treachery within tranquility is real.

You ever feel like a screw up and only able to do the minimum? “I’m a fuck up…Try as I might, can’t get it right…Living my life just skating by”. If you’ve never felt this way you’re probably not human. “Puke” delves into self-loathing through his cathartical lyrics. The man is genius in interlacing those elements of us we are fearful of confronting.

One of the more, dare I say it, “poppy” tunes on the album with serious subject matter. The pleasant bass and guitar parts provide an ambiguity to the cautionary narrative of a serial rapist whose lustful behavior leads to all-around devastation.

Such a keen guitar riff. One of those songs that signals we are near the end of the album. A couple of tempo changes make the song stick out, one of the album’s keepers.

An ode to a liar. The title says it all. Parnell can now express the bitterness of loss through his lyrics AND voice.

My selection as the opener of their first live post-pandemic show. What a build up! Picture this, I’m in line for a beer at the Megadeth/TTG show and after purchasing my $15 Coors Light, I’m running for the general admission/pit area in front of the stage so I don’t miss a note of TTG. The lyrics seem to refer to the oppression of a self-seeking political system. The song features the glockenspiel, a percussion instrument having a set of tuned metal pieces mounted in a frame and struck with small hammers and the theremin, an electronic musical instrument controlled without physical contact. Listen closely.

A majority of the Maya Angelou poem ‘On the Pulse of Morning’ accompanied by Parnell on ukulele. TTG’s finale ends ‘Capitol Hell’ with a salutation of affection to the world. A memo of optimisms that with understanding, we can all participate in a unifying purpose for the world.

“Here on the pulse of this new day

You may have the grace to look up and out

And into your sister’s eyes, and into

Your brother’s face, your country

Throw The Goat – PPL Like U (Official Music Video)