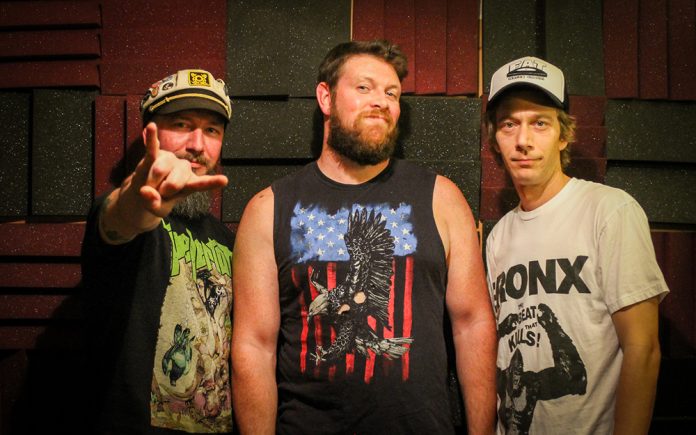 Also on Friday, Bandcamp is pledging 100% of their sales to benefit the NAACP Legal Defense Fund. You can go to throwthegoat.bandcamp.com to purchase the song and support the cause.

If you believe in the mystical relationship between numbers and the success of TTG, you are sadly mistaken. ‘Don’t Believe’ (Regurgitation Records/Combat Records) is a return to the birth, blood and sound of TTG that delves into the secret world of conspiracy theorists. The elaborate video for the song only confirms that TTG are imaginative and thought-provoking and not schizophrenic. Its seizure-inducing splicing of frames from FBI agents to Bigfoot to JFK to 9/11 to alien autopsies to COVID-19 provide a confidential observation of the unglued stargazers we give heed to during unique occurrences.

In all reality TTG is Brian ‘Puke’ Parnell on vocals/guitar, Troy Anthony Whitford on drums and Derek Wade Timmons on bass/vocals. TTG are on pace to release a song and video every 2-3 months. Their prior video release, ‘PPL Like U’, has received almost 35K views on Facebook and ‘Don’t Believe’ is in position to surpass that number.

Before we delve in to the interview, Puke wanted to announce that the 3rd Annual Idyllwild Strong Benefit Festival will return this year with online performances from some of the best artists locally and beyond. The event will be simulcast from venues in Idyllwild and will alternate between live performances and pre-recorded footage. Go to idyllwildstrong.com to donate and find out more.

EXCLUSIVE INTERVIEW WITH THROW THE GOAT

CVW: Congratulations on another cool song and video. 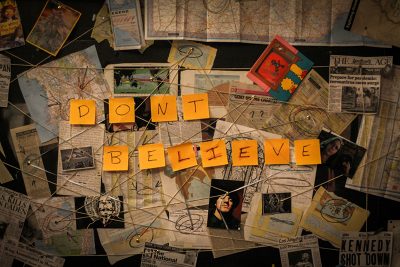 Puke: “Today was really cool man. It was definitely a weight that was removed because we’ve been working on it for a while gathering footage. It feels good to get it out there and for people to finally put ears and eyes on it. We’ve been working on this for a while, the lyrics had been coming and the song was written last year. It’s never not been a topic for discussion. The conspiracy thing is always a thing and it’s amplifying every day. With the COVID-19 thing and everyone having a bunch of time on their hands just watching YouTube and lose their minds. The timing was perfect.”

DWT: “We’ve been really excited for it for a long time and looking forward to it for quite a bit. Some people in the band, not so much me, have done a whole lot on making this thing come together real well. Also, thank you to our friends of the band and camera people.”

Troy: “In the beginning it was all kind of a ‘do-it-at-home’ thing because we were on lockdown. A lot of the footage, as you can see, we made little rooms with conspiracy walls. We did the best we can, Derek is in his backyard wearing a hazmat suit and digging holes for some reason and we were gonna put it together like that and then everything started opening up so we felt more comfortable for Puke and I to go out into the forest and just do some things, we had more access after that.”

CVW: The lyrics are pronounced and inherently pair up great with the video. Not to mention I’m a big Sasquatch fan. What’s the angle of the song? 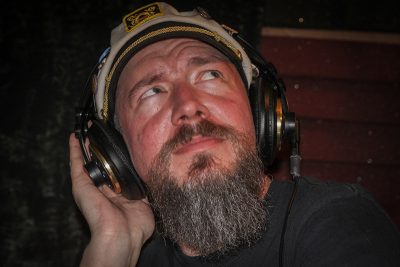 Puke: “The lyrics bounce back and forth from the point of view of somebody who is falling down that rabbit hole. The opening line, ‘You don’t know shit but I do, researched it, that’s what I do’ is written from that perspective. People who are those hardcore conspiracy types are going to maybe think this is their anthem and we’re singing their song, they’re going to agree with it. To everyone else it’s (fingers in ears) ‘la la la la la’. That’s the thing with these conspiracy videos is that It dabbles in enough truth to where people just get convinced enough if it falls along with what they want to believe in anyway.”

Troy: “Nobody believes what anybody says. It’s from everybody’s point of view. It seems like nobody is gonna believe what you fuckin’ say no matter what. Our game plan was take as much video as you can and send all of it to me and we’ll image it all together and see what happens. Then we were able to go out and make the story of it, take shots where the story makes sense. It was us basically being as subliminal as possible.”

DWT: “I hope it becomes the theme for the people we’re talking about. Bigfoot has picked up his hiding game through the years because now that everybody’s got phones on him, he’s still not getting caught on camera. It’s not that he’s not real, he’s just adapting.”

CVW: Derek, how long have you been in the band now? 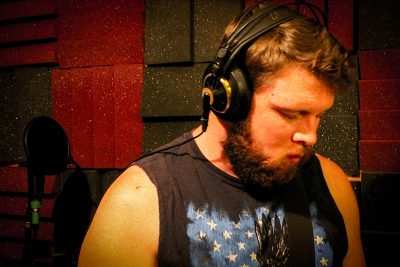 DWT: “Longer than it seems because time has flown because we’re having a good time. We were busy but then we were only able to do things remote for a little bit. It’s been a great time. I already like these guys but now I like them even more. True story.”

Troy: “It’s been just over a year right? My favorite part of band practice is driving all the way up to Idyllwild with Derek in the car. It’s a good time, then on the way back.”

CVW: In navigating TTG through the quarantine, how has the band orchestrated making music?

Puke: “Originally the plan was to get together during April and me staying with Troy while I so some work for Goldenvoice and FNB. So I was gonna be down in the desert anyway only working weekends where we would have all week to work on stuff. Then things got a little screwy. Basically, now I demo stuff out, send it to everybody then get together and record bits and pieces of it when we could. So instead of getting together and jamming and working it out it was kinda more piecemeal but now we’re able to go in and we can go back to these songs that did start out more fluid and learn those again and learn all the other stuff that we recorded. It’s been much more like a straight up studio ‘come and do your parts’ thing rather than like an organic ‘making shit up as we go along.’”

Troy: “Sometimes it’s writing the song as you’re recording it. Then you listen back to it and give it a once over and do it again, see if it’s better, if it isn’t, you listen to it again.”

DWT: “It’s been fun because I’ve never really done that before, working remotely. A lot of these things are fresh and captured right when they’re brand new. From my point of view, Puke spends hours and hours and hours doing lots of work to give me that thing to write to. He works really hard, Troy works really hard, these guys are hard workers. We also have a little more time to write without having to rehearse for that 45 minutes that needs to be perfect a weekend show.”

Puke: “When you do, do it this way, when you get together and you start hammering stuff out when you get to the recording stage it gets confusing because when you’re in a room jamming stuff out you kind of know what everybody else is playing but you don’t really know until you get in and record it. Sometimes there’s things that just absolutely don’t work and you have to rewrite it. It’s been a lot more fluid.” 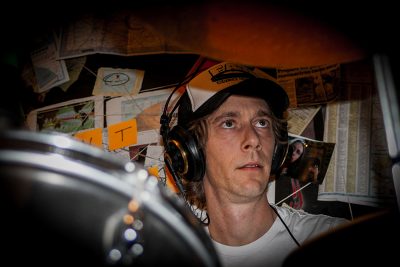 Troy: “When you are writing a song, playing it all together and doing shows, and then you go into the studio and start laying down tracks you start realizing sometimes that certain things don’t fit then you gotta rewrite it. The way we were forced to do it was now there is none of that hiccuping, we’re hearing it clear and making it solid right away. Playing it live, we were able to take those hiccups out.”

CVW: TTG is moving as if there was no pandemic. What’s next?

Puke: “We’re already talking about the new video. We have 11 songs that are not so much in the can. It’s a lot of material. An old school TTG fan hit me up today to say congrats on the new song and video and to tell me that it sounds like classic TTG. It’s a lot more like ‘Black Mountain’ (2012) than any of the other records.”

DWT: “We’re doing a lot of different things too. I’m real happy to say that there’s variety in these upcoming things.”

CVW: You had major U.S. touring plans for the end of 2020 that were to coincide with the election but unfortunately it didn’t come to fruition. Where does #VoteGoat2020 stand at this point?

Puke: “Biden has over 2K delegates already and you need 2K and something to get the nomination so there’s no way for anybody else to jump in and get enough delegates to take over so it’s basically Biden and Trump and there’s no way that I’m voting for Trump. So it’s either, do I write in Bernie Sanders like I have in previous elections, I don’t know.”

DWT: “Vote for the guy who’s less of an asshole, that’s always what I do. I wish they would give us voices. If you want your vote to count, and even then only maybe count, you have to pick which one you think will actually win. But if everybody would vote not on the two-party system it would make a huge difference. It’s very difficult so at least go vote. I don’t like anybody staying home that for sure doesn’t do anything.”

CVW: Finally, what would you like to say to your Goat Tribe?

Puke: “Thanks everybody for the continued support for TTG, I know things might look and sound different from what you’ve known over the years but we’ve got 100% of our hearts in it and this shit is going nowhere but forward. I appreciate everybody that’s along for the ride. Shout-out to Derek and Troy for being the awesomest band members that there could be and always putting what they can into it, my crazy ideas and their crazy ideas, we all put it together, it’s a rad little family. When everybody believes in each other that much you know you’re gonna do good things.”