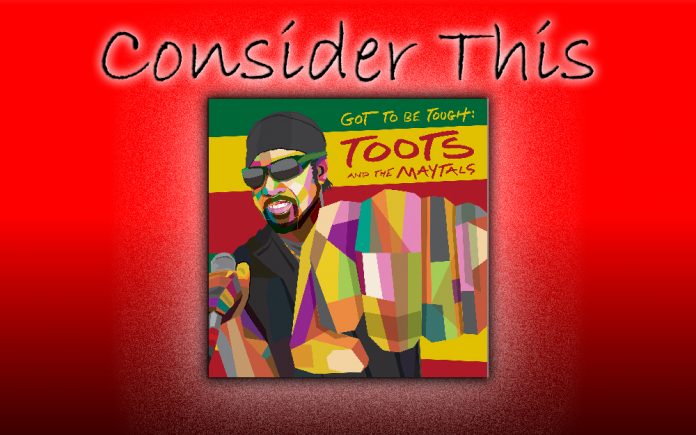 Although both Adam and Matthew had passionate fans, they weren’t exactly household names. Adam was best known as the front man for Power Pop sensations The Fountains Of Wayne (“Stacy’s Mom”), he also wrote the insanely catchy title song from the Tom Hanks film, “That Thing You Do!” As part of the British New Wave scene, Matthew was the bassist for the Soft Boys. He continued on with ex-Soft Boy leader Robyn Hitchcock and spent several years playing with Thomas Dolby. Most recently he worked as a session musician with people like David Bowie, Tori Amos, Peter Murphy and Morrissey.

Now the Reggae World has been hard hit with the loss of one of their remaining elder statesmen, Toots Hibbert. He died from complications from Covid 19 on September 11th. Ironically, two weeks before, he’d released his 18th album with is band, The Maytals, entitled Got To Be Tough.

Along with Bob Marley, Peter Tosh, Bunny Wailer and Jimmy Cliff, Frederick “Toots” Hibbert was a Reggae pioneer. Born in Jamaica in 1942, he grew up singing Gospel music in the church choir. Both his parents were Seventh Day Adventist preachers. The youngest of seven siblings, he was orphaned at age 11. He moved in with his brother, John, who lived in the tough Trenchtown neighborhood in Kingston. Working for a local barber, he met future Maytals, Henry “Raleigh” Gordon and Nathaniel “Jerry” Matthias.

A multi-instrumentalist, Toots took inspiration from American Soul and R&B artists like James Brown, Ray Charles, Wilson Pickett and Otis Redding. By the mid ‘60s, the band became a five-piece, adding Paul Douglas and Jackie Jackson. They were becoming one of Jamaica’s more popular vocal groups when Toots was busted for marijuana possession and sentenced to 18 months in jail.

Once he regained his freedom, the group was rechristened Toots & The Maytals. As their music evolved from Ska to Rocksteady and finally Reggae, they began working with seminal producers like Coxsone Dodd, Prince Buster, Byron Lee and Leslie Kong. One of their first songs, “Do The Reggay,” released in 1968, written to cash in on a brief dance craze, became a regional hit. It is widely credited for effectively labelling the new genre, and introducing it to a worldwide audience.

As the ‘60s rolled over into the ‘70s, Toots & The Maytals seriously found their groove, issuing a series of seminal songs like “54-46 (That’s My Number),” “Sweet And Dandy,” “Monkey Man” and “Pressure Drop.” “Monkey Man” became their first global hit in 1970, and soon the band signed with Chris Blackwell’s Island Records. The label had already broken Reggae artists like Bob Marley and Jimmy Cliff in England and America, and would hoping Toots & the guys would benefit from that success.

1975 saw the release of their most beloved album, Funky Kingston. Toots had finally realized the perfect synthesis of Jamaican rhythms and American Soul, best exemplified in the call-and-response grit of the title track. He followed up a year later with the equally potent Reggae’s Got Soul album. Although they never achieved the same fame as Bob Marley, by the end of the Me Decade Toots & The Maytals were gaining younger fans thanks to the Clash’s cover of “Pressure Drop” and the Specials’ version of “Monkey Man.”

Following their 1981 album, Hit It, Raleigh and Jerry quit the band, retiring from music completely. Toots soldiered on as a solo artist, spending most of the ‘80s on the road, rather than in the recording studio. But in 1988 he teamed with renowned Reggae rhythm section Sly Dunbar and Robbie Shakespeare to make Toots In Memphis. Recorded at the famed Hi and Stax studios the album was an affectionate tip of the hat to Soul progenitors like Otis Redding, Al Green, James Carr and Eddie Floyd, just to name a few. It was a resounding success.

By the mid ‘90s, he put together a new version of the Maytals and started touring non-stop and occasionally recording new albums. In 2004 he made a huge impact with True Love, a duet album that paired him with admirers like Keith Richards, Bonnie Raitt, Willie Nelson, No Doubt, Jeff Beck, Bootsy Collins & the Roots. It completely raised his profile and earned him a Grammy for Best Reggae Album. Two more albums, Light Your Light and Reggae Got Soul: Unplugged On Strawberry Hill appeared in 2007 and 2012, respectively.

Toots dialed back his live appearances following a 2013 incident when he was struck in the head by a vodka bottle while performing onstage. Not only did he receive six staples in his head and sustain a concussion, he also suffered from anxiety, memory loss and a fear of crowds. He was back on the road by 2016, a few months later, he and the Maytals played Coachella.

After several years without a new album, Toots signed with the Trojan Jamaica. The label is a new venture between singer/songwriter Sharna “Sshh” Liguz and Zak Starkey, who is best known the son of Ringo Starr and longtime drummer for the Who. But he’s also a massive Reggae fan. Got To Be Tough is the first release for the label.

The album kicks into gear with “Drop Off Head.” Clangorous guitars, supple bass lines, greasy saxophone and sticky keys are buttressed by an easy Skank riddim. Toots’ vocals are slightly gruff, but still warm and soulful. The lyrics offer some positive vibration; “If you fall, you can rise, pick yourself from off the ground, sometimes your good friend let you down, saying bad things about you/Just use it as a motivation, cause I know your expectation, don’t you prejudice against no nation, I know what you anticipating/Just try, try and try, don’t let the enemies put you down.”

Toots has never concealed his affection for American Soul and R&B, but on two tracks, “Freedom Train” and “Just Brutal,” he actually flexes some different musical muscles. The former returns him to his Gospel roots. Call and response vocals crest over rubbery guitars, squiggly keys, driving horns, sprightly synth figures, tensile bass and a chugging backbeat. Lyrics decry the plight of the poor and the (never-ending) quest for equity; “Bus fare raise again today, working people don’t get no raise a’pay, poor people pension fall on the ground, you can’t even manage to pay bus fare.” A fat stack of horns attack on the break, adding to the song’s sense of urgency.

On the latter, lyrics like “We were brought here, sold out, victimize brutally, every time I keep remembering what Grandfather said before he died..” offer a stinging indictment on slavery. But the message is nearly disguised by the infectious arrangement. Springy guitar riffs, pliant keys, righteous horns and nimble bass lines are wed to a four-on-the-floor Disco beat. But Toots’ righteous anger clearly reflects the ongoing struggle “We were brought down here in slavery, count out, knock out, TKO, I don’t know what this world is coming to.”

The best tracks here arrive back-to-back-to-back. “Warning, Warning” unfurls slowly before locking into a sinewy groove propelled by rippling guitars, grumbling keys, agile bass, static percussion, and a Skank-tastic beat. It’s tempting to think the opening verse is aimed at the at the tangerine-hued taint-stain in the Oval Office; “Let decency counteract your dirty principles that you possess, and be respectful, so that everyone can see/Why don’t you utilize your brain, in the right way you should, well, if you don’t change, I would assume, that you would be doomed next to your tomb.”

Despite its unwieldy title, “Good Thing That You Call,” has all the ingredients of a banging slow jam; smoky harmonica, hip-hugger horns, twinkly percussion, down n’ dirty guitars and a skittering rhythm. Rambling, almost conversational lyrics concern a missed phone connection; “I’ve been calling you night and day, didn’t you see my missed calls, I’ve been texting you every time…” But Toots is too much a smooth operator to take it personally, his mien remains sly and seductive.

On “Stand Accuse,” scratchy guitars connect pulsating bass, swirly keys and splattery horns to a prickly snare-drum kick. Here, Toots combats rage with hope, malaise with faith; “And I wish if everyone could be, just like today, the morning is warm and bright, there is sunshine everywhere (ha-ha)/I know good come out of evil, and out of evil come forth good, poor people need a helping hand, to help their children get an education.” Punchy horns and phased guitars duke it out on the break, but in the end, love that conquers all.

Finally, Toots tackles a Bob Marley classic, “Three Little Birds,” with some assistance from the Reggae legend’s eldest son Ziggy. Rather than offer a rote rendition, Toots radically reconfigures the arrangement. The track is anchored by wheezy, mechanized percussion, boinging bass lines, jittery guitars, billowy keys, curvaceous horns and a caffeinated back-beat. The pair trade verses, offering encouraging asides (“sing it my nephew,” “sing it Uncle Toots”), that kind of warm the cockles of your heart. (If they don’t, you better get your cockles checked). Although the original message of optimism is almost blunted by the agitated instrumentation, there’s a playful vibe that shines through. That’s largely due to Toots avuncular bearing, Ziggy’s deferential respect, sweetly sitar-iffic guitars, and the swinging horn section. On a record jam-packed with killer tracks, this one is a tour de force.

Other interesting songs include the percolating empowerment of the title track, as well as the metallic crunch of “Having A Party.” The closing song. “Struggle” offers one more plea for unity. Toots roughhewn vocals ride roughshod over ricochet guitar riffs, wiggly keys, brawny bass lines and a rock steady beat. His final words echo five times; “We got to stop the fighting, the shooting and the killing/We got to stop the fighting, got to find a way to stop it.”

Toots is gone from this world, but he’s left us Got To Be Tough, as a righteous and rollicking parting gift. It’s easy to say Fuck Covid 19 and the maskless, reckless dilletante who thinks this virus has turned a corner. But wouldn’t it be more powerful to play his music loud and follow Toots’ edict to stop fighting?