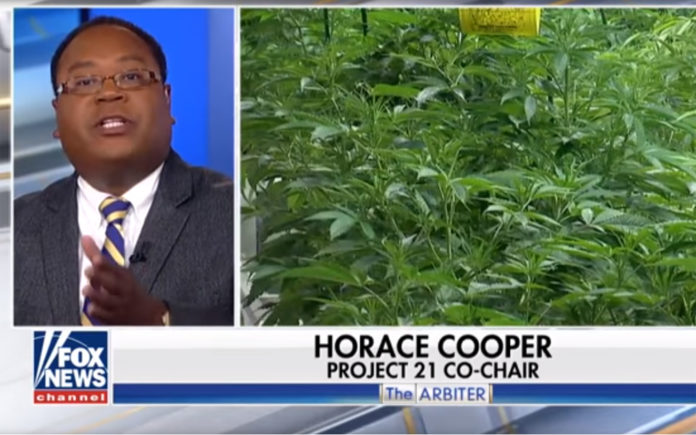 Last week the Laura Ingraham Angle, a show on Fox News, started a new section called, “The Arbiter,” where Laura plays the judge between two opposing views. Her first subject was “Should marijuana legalization be expanded?” She chose this topic because last Thursday, in Los Angeles, the State of California announced the new regulations, which take effect on January 1, 2018, for legalizing recreational use of marijuana.

Leo Terrell, a Civil Rights Attorney, argued to expand use. Horace Cooper Attorney, the Co-Chair of Project 21, a National Center for Public Policy Research, argued to ban expanded use. Both gave the most incompetent arguments. It begs the question, why did Laura picked attorneys instead of scientists, biologists, or physicians? Maybe she could not find any scientist to oppose the expanded use.

This is an all too common trait of the news media, they ask opinions of the most uninformed public. Do you want to hear from lawyers the benefits of cancer treatment? Cannabis is a plant which has been used for over 5,000 years for medicinal purposes. It has been illegal worldwide for only around 90 years when the signatures of the League of Nations, banned Indian Hemp and the preparations derived thereof.

Attorney Cooper was all over the map in his discussion. He knows how to filibuster and conflate with misinformation. His argument to ban was because marijuana causes poor learning and our education system is failing due to our kids smoking marijuana. What does primary education have to do with the subject? Everyone agrees anyone under 21 years of age should not smoke marijuana.

Laura Ingraham is not the only journalist to focus on recreational cannabis. Bill O’Reilly, 60 Minutes, and many commentators on TV, when asked about legalization focus only on smoking pot. Dr. Mark Siegal from Fox News, responded to the opiate crisis by sharing this scenario. He did not want to fill a percocet prescription for a new patient. Instead he referred his patient to a pain interventionist. That is a physician who advocates surgery, steroids, and internal pumps.

Dr. Siegal gives the impression internist cannot manage pain. Who does he think we go to, a revolving door of doctors? Let’s all get on a merry-go-round and get off at the next doctor stop. Dr. Siegal is a national TV consultant, and did not once talk about the 25,444 peer review articles in the Pub-Med, a repository for scientific studies. Research shows medical cannabis can get patients to stop their opiates. Nor did he mention referring his patient to a cannabis specialist, or palliative care physician.

Representative Steven Cohen is one of the best advocates to listen to as he argues for legalizing cannabis. He grilled Obama’s Drug Czar last year, Michael Botticelli. It was a stunning rebuke to our current drug policies. Rep. Cohen used facts and logic vs. the innuendo and hyperbole of those in our government and TV media. See his testimony on YouTube.

Politics is the cause of cannabis’ illegality not science. Cannabis has a nine per cent probability of addiction like anxiolytics or drugs like ativan or valium, yet our doctors order an antianxiety drug without reservations. Alcohol has a 15%, tobacco a 32%, and opioids a 30+% chance of addiction. Read Paul Armentano’s book, “Marijuana is safer, so why are we teaching people to drink,” for an authoritative look at the safety of marijuana/cannabis.

We should be grateful in this Thanksgiving time that we have a publisher who will dedicate her newspaper to exposing the disinformation about cannabis, medical or otherwise. In this time to reflect on our gifts from God I am grateful for: opening my mind and eyes to the science of cannabis, my gift of writing so that I can share my cannabis knowledge, my ambition for advocating cannabis to users who are suffering. Happy Thanksgiving everyone.