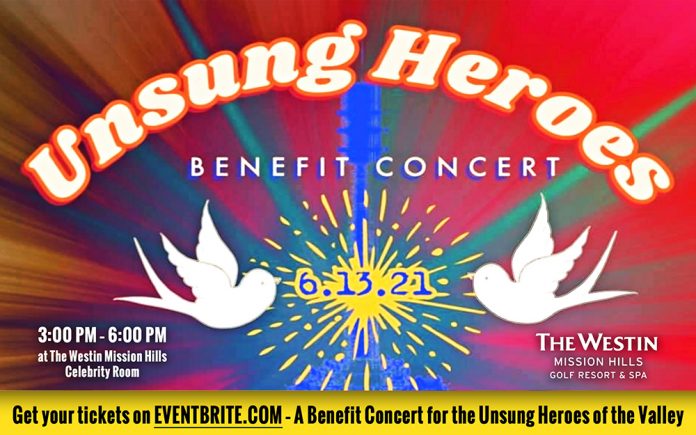 Live performances were nonexistent during the thick of the coronavirus pandemic, leaving many musicians struggling to make a profit during an economically turbulent climate. With restrictions in California loosening, music venues have only recently brought back music acts for indoor and outdoor performances with safety protocols in place. The Benefit Concert for the Unsung Heroes of the Valley will take place at the Westin Mission Hills Golf Resort & Spa on June 13, with all proceeds going back to local artists as a tribute to the musicians and artists who have been prevented from making a living during the pandemic.

The benefit concert was organized by Jack Srebnik, owner of both The Slice New York Style Pizzeria and Maracas Cantina in Rancho Mirage. Having to run his restaurants in the midst of the pandemic while adapting to safety regulations was challenging enough, but Srebnik also supported local medical personnel by providing hospital workers with free meals during the height of coronavirus. Although this is the first time he has organized a concert event, Srebnik wanted to raise awareness for the musicians who have suffered during the pandemic and had many local businesses and community members volunteer their time and efforts to make this event happen.

“A lot of people were focusing on essential workers during the pandemic, but it wasn’t until I put up the outdoor dining tent at Maracas with live entertainment that I found out there was a whole other factor of people that were hurt and lost income because they couldn’t perform. The response to the outdoor performances were so great that I told my partner Ellen that I wanted to put together a concert to benefit musicians. I have never done this before, and it’s phenomenal the amount of people lending their support,” said Srebnik.

Doors open at 2:30 p.m and the festivities last from 3 p.m. to 6 p.m. at the Westin Mission Hills Celebrity Room. The benefit concert will feature performances by local artists such as Marc Antonelli, Keisha D, Chris Lomeli, Barry Minniefield, Patrice Morris, Leanna Rodgers, and Sergio Villegas, all of whom have worked with Srebnik.

Marc Antonelli is a Boston native with an eclectic Classical/Pop crossover background who studied music at The Boston Conservatory/Berklee College of Music and subsequently headlined in Atlantic City for five years. He performed in the Concert Choir for Andrea Bocelli, sang for David Foster at The McCallum Theater in Palm Desert, and was the lead singer of the ‘Venetian Trio’ on the legendary Las Vegas strip. Since coming to the Coachella Valley in 2019, Marc has captivated desert audiences at LG’s Steakhouse, Bernie’s Lounge and Supper Club, Chef George’s Picasso Lounge, The O’Donnell Club, AJ’s on The Green, The Slice, Maracas Cantina, and Casuelas Cafe.

“I feel an overwhelming surge of hope, faith, and love performing for this beautiful and inspiring cause. The pandemic has derailed most if not all of our work as musicians. The struggle in not knowing if food would be on the table for our families was not only a fear, but began to become an unfortunate reality. We have been able to successfully unite and breathe together as one for this inspiring and beautiful celebration of music and new beginnings,” stated Antonelli.

Keisha D is a Hollywood native who began her music career in church during her adolescent years. Mastering her talent, ambition, and craft, Keisha became a stylist in the worlds of gospel, jazz, blues, opera, and pop. Her desert stratum began at the McCallum Theatre’s 2008 open call, where she was awarded “Best Vocals”.

Chris Lomeli is a sultry singer fusing pop, rock, soul, and both Latin and American standards. Born and raised in the Coachella Valley, Chris performs at some of the desert’s top venues and country clubs. He also entertains at private, corporate, political, and philanthropic events. All of Chris’ performances and future contracted events were cancelled during the pandemic, which led him to respond in a creative way by providing “Curbside Song Deliveries” for his community—a free service where Chris would sing at the front doors, porches, and driveways of his fans.

Barry Minniefield has been acting, singing, and honed his skills as a gourmet chef during a 10-year stint at the world famous Improvisation Comedy Club. Minniefield has also performed and/or prepared gourmet cuisine for a long list of celebrities including Tom Arnold, Cher, Milton Berle, Jay Leno, Arnold Schwarzenegger, Oprah Winfrey, and Robin Williams.

Leanna Rodgers joined by her husband of 18 years, Miguel, are an entertainment duo in the Greater Palm Springs area where they hold residencies at V Wine Lounge, Hunters, The Roost Lounge, and perform at private events throughout the Valley. Pre-COVID, they were booked regularly at venues such as Mr. Lyons, Wangs in the Desert, JAX, The Greek 13, and private events, including the Frank Sinatra Estate with their four-piece jazz band. Leanna is an award-nominated actress/vocalist who has performed for many of the professional/ regional theaters in the Coachella Valley and Southern California. Miguel is an Army Medic Veteran and has joined Leanna as her full-time conga player for the past three years.

Sergio Villegas is a multi-instrumentalist and international recording artist whose music has been featured on over 50 albums. Born in Chile, he made his way to Los Angeles, and has been entertaining the Coachella Valley for the past 20 years. He has played at large-scale events and prestigious country clubs, restaurants, and theaters including the McCallum.

“I feel honored to be part of this event with all these amazing musicians. I am performing from my heart and am so thankful to be healthy during the pandemic. I hope many people come out to the concert to support artists, and I am very appreciative of Jack for putting this together,” said Villegas.

Tickets for the Benefit Concert for the Unsung Heroes of the Valley are available on Eventbrite.com, at https://www.eventbrite.com/e/a-benefit-concert-for-the-unsung-heroes-of-the-valley-tickets-156008077359.