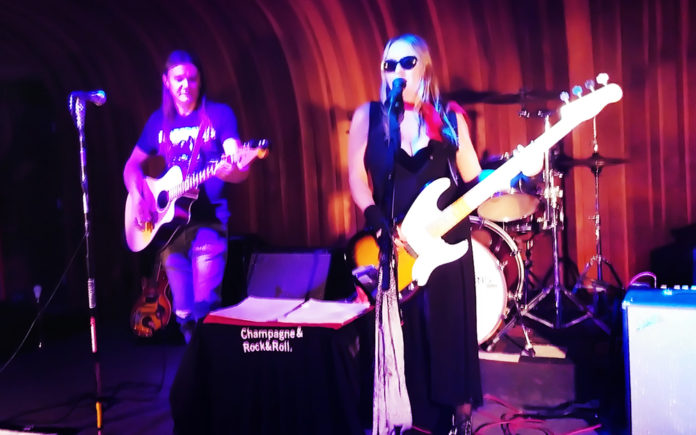 Watch out Coachella Valley! Word on the street is Van Vincent is the “freshest, sexiest and scariest new band to hit the valley.” Palm Springs residents’ Daniel “Diggler” and Karina Van Ron bring to you a combination of sophistication, class, depth, fun and excitement with a theatrical rawness to the stage. The passion woven into their music can make the most heavy hearted forget all their woes for a moment or two. The electric chemistry between the star-crossed lovers is undeniable, right down to the name of the band. Van Vincent is a combination of both Karina’s and Daniel’s middle names.

While Van Vincent is in its infancy stage, both Karina and Diggler happen to be well seasoned musicians with decades of experience under their belts. Diggler speaks on Karina: “We met, we both realized we have a shared common interest in music. I really was looking for an excuse to play the guitar. She can sing like an angel and it works. She’s got a lot of good stuff. She’s a very accomplished artist.” In fact, there was a year and a half span in which Karina was the stand-in bassist for Courtney Love’s band, Hole. Cortney Love, is the widow of deceased Grunge Alternative Rock Legend Kurt Cobain of Nirvana. Karina recalls this period of her life: “It was interesting. I guess life happens and we didn’t tour and stuff because she (Courtney Love) sued former bandmate Gavin Rossdale and lost the rights to the name. She went to Canada and started a new band called The Bastards because she could no longer use the name, Hole. She could not use anyone from the U.S.A anymore. So she couldn’t use us.” 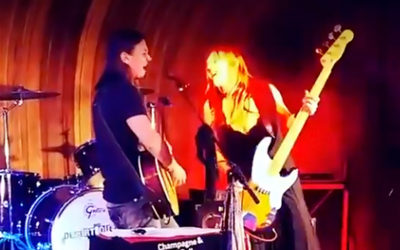 Karina Van Ron is known for playing large music festivals throughout South America, in regions like Argentina and Uruguay. Personally for Diggler, his most accomplished moment was in April 2017 with his other band, Gutter Candy. They opened for Rock Legend’s, Red Jumpsuit Apparatus at The Hard Rock in Las Vegas. Over the last year Gutter Candy has been on and off tour. They even opened for Australian R & B-garage based Rock band, The Throb. Diggler has also opened for Todd Lowe, who plays Terry Bellefleur on HBO’s True Blood at world famous Pappy & Harriet’s in Pioneertown.

Van Vincent finds inspiration in the best of all genres. Some of their favorites include Tool, Primus, David Bowie, CBDB, The Doors, and Pink Floyd, “anything that’s old school psychedelic because I kind of like to zone out,” explains Karina. Pink Floyd’s influence definitely can be heard in Van Vincent’s sound, especially in their acoustic dinner set. They love to infuse their music with psychedelic chords, making them stand out from others. Van Vincent wants to “keep it psychedelic in the desert”. One of Diggler’s favorite songs to cover is “Sweet Dreams” by the Eurythemics. “Watch out Annie Lennox, this girl’s got some pipes!!” screamed Daniel.

Van Vincent has launched the 2018 Eclipse Tour. The duo will be performing every single eclipse in 2018 with special tour shirts available for purchase. Musically, they stay busy, Karina with her Karina Van Ron project and Diggler with Sticky Doll and Gutter Candy. They are now making Van Vincent a priority. By the years end they hope to have a full length album out.  They have a great deal of original music that’s yet to be recorded. As you are reading this article, Van Vincent is hitting the studio for the first time. Other than The Eclipse tour, Van Vincent will be at Gadi’s Restaurant in Yucca Valley on March 24th. They will also be at the open mic at The Palm Canyon Road House on Tuesday, January 30th. To keep up to date with Van Vincent and/or for booking information follow them on Facebook.