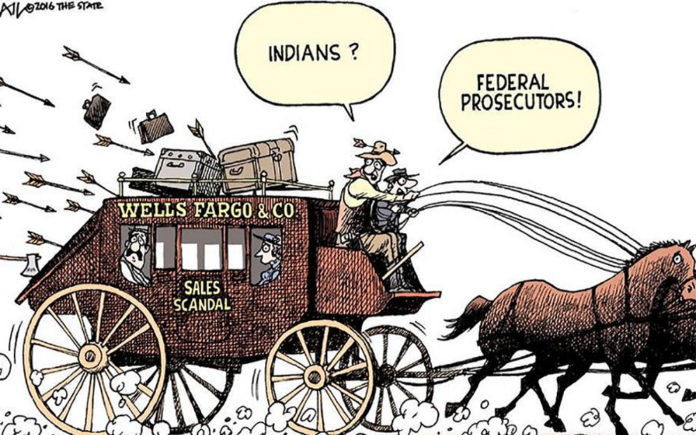 Just last week, Wells Fargo announced that the fraudulent checking account ‘problem’ that came to light last year affected 3.5 million accounts, not just the 2.1 million accounts disclosed last year. This means that nearly 2% of all accounts at Wells Fargo were opened fraudulently. While 5,300 employees lost their jobs over this, what would happen to you if you opened a bank account in the name of someone else without their approval? How come no one at Wells Fargo has faced a similar fate?

Wells Fargo likes to represent itself as “America’s Community Bank” despite being the third largest bank in the nation. Their claim becomes even more outrageous when you realize that they flunked their Community Lending Exam. Federal banking regulators severely downgraded the bank due to “discriminatory and illegal” lending practices of an “egregious nature” where Wells Fargo directed Hispanic and African-American clients toward more expensive loans. This downgrade means that many cities, counties and states may not be able to work with Wells Fargo until this rating improves. Tim Sloan, Wells Fargo’s CEO was “disappointed” with the rating downgrade as he thinks that they have done great work.

Sloan might have to rethink who should be disappointed as the bank was fined for discriminatory practices against pregnant women. From 2010 until the end of last year, Wells Fargo discriminated against nearly 200 women who were either pregnant, on maturity leave or who had recently given birth. Wells Fargo would require that these woman return to work early as a condition to a loan closing.

Wells Fargo also treated our brave servicemen badly too. The bank paid a fine for illegally repossessing 413 cars from servicemen in combat zones over the last seven years. In one case, they sold the car of a serviceman in Afghanistan and then went after his family for the balance owed. The law protects veterans from property repossessions while in combat. Not only did Wells Fargo repossess on these cars illegally but they charged usury interest rates as well.

As this article isn’t long enough to cite all recent Wells Fargo transgressions, here are a few more of their most noteworthy:

Charged 570,000 people for car insurance that they did not request or need causing many borrowers to go delinquent and 20,000 to have their cars foreclosed upon.

Paid a $1.2 billion for re-papering loan files so that the bank could sell bad loans to the Federal Housing Administration.

Changed loan terms on people in bankruptcy without the approval of the courts in an effort to get a better settlement in bankruptcy than other creditors.

Charged student loan borrowers unnecessary fees. The payment processing area would often sit on a checks for a day or two in order to cause and charge late payment fees. To make matters worse, the bank then provide inaccurate information to the credit bureaus.

Rearranged the order of checks being processed so that the largest check had to be paid first (or bounce) causing greater NSF charges. A judge has ordered the bank to return $230 million to clients for this behavior.

On investment accounts, they allowed investment advisors to change values on consolidating reports in more than 5 million instances meaning that those reports could have had false or misleading information.

Fined $5.4 million for firing an employee who tried to disclose illegal account opening practices to management.

For as bad as this list of transgressions is, the list could be much worse if Wells Fargo did not require most customer disputes to go to arbitration causing these cases to be private.

It is time that you and I stand up to the Wells Fargos of the world take our business elsewhere. There are countless honest and ethical banks, lenders and investment firms out there who want your business. Do your part and frequent the good people and not those who behave as though fines and penalties are simply a cost of business.

Haddon Libby is an Investment Advisor, Fiduciary and Managing Partner of Winslow Drake Investment Management. You can reach him at HLibby@WinslowDrake.com or 760.449.6349.