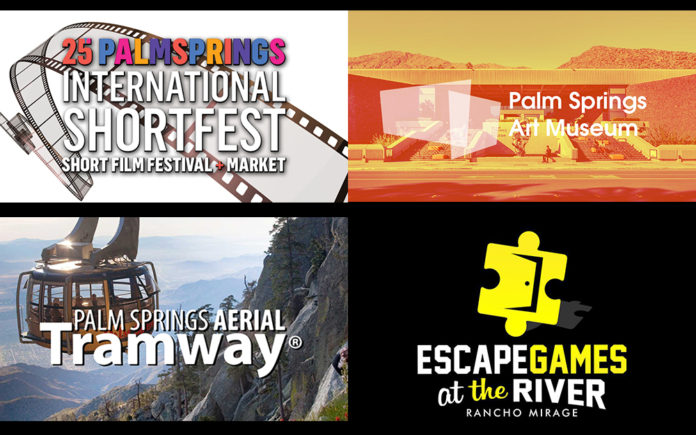 It’s difficult not to notice the scorching temperatures once June comes around in the Coachella Valley. Luckily, there are plenty of fun activities to do in the desert that will help you beat the heat this season, ranging from artistic exploits to thrilling adventures.

Located in Rancho Mirage, Escape Games at the River presents puzzling challenges for guests to entertain themselves during the summer. Voted as the Best Escape Room Outside of Los Angeles in 2017 by Forbes Magazine, this activity features unique and creative gameplay for all ages. Participants must solve clues and riddles in order to escape from a themed room within 60 minutes. Each game has a different level of difficulty and number of players allowed to participate. Escape Games at the River currently offers five escape room options, including C.S.I.- Mob Unit, The Inheritance, The Secret of Dragon’s Spire, The Forgotten Pharaoh, and Baker Street Mystery. Another new addition is a game called Deadringers Coffin Escape, where participants can compete against each other. The objective is to be the first person to repair the cord and ring the bell to escape from your coffin within 15 minutes. Prices for each game range from $32 to $35 per person.

The Palm Springs Aerial Tramway offers the perfect opportunity for a scenic getaway within the desert, especially during the summer months as temperatures are much cooler with the higher elevation. This attraction is the largest rotating aerial tramway in the world, providing beautiful scenic views of the San Jacinto mountains and Chino Canyon. It’s about a ten-minute ride up to the top of the tram, with tram cars running at least every 30 minutes on the hour. Once you ride the rotating car, there are many more family-friendly attractions to experience, including two restaurants, observation decks, a natural history museum, two theaters, a gift shop, and over 50 miles of hiking trails. Tickets can be purchased in advance online, or on the day of your visit at the Tram’s Valley Station. Adult tickets sell for $25.95, while children between the ages of 3-10 are admitted for $16.95.

For film lovers, the 25th Annual Palm Springs International ShortFest takes place on June 18-24. During the course of this local summer festival, approximately 369 short films from over 100 countries will be showcased. Each ShortFest screenings are grouped into themed programs, which consist of four to nine short films that share a similar style and plot elements. Q & A panels with attending directors and other film crew takes place after each program. Tickets can be ordered online at psfilmfest.org or in person at the Palm Springs Cultural Center Box Office. Individual screenings and panels are priced at $13, while Opening Night tickets go for $60 and Closing Night tickets are $50. Vouchers six-packs and passes are at a discounted price of $69.

The Palm Springs Art Museum represents a colorful range of artistic representation in the Coachella Valley with its desert-centric installations and one-of-a-kind exhibits. Some featured exhibitions for the summer include Photography From the Permanent Collection: A Closer Look which runs until July 11, the Lines in the Sand contemporary art inspired by the physical and cultural environment of the state running until August 11, and A Tribute to Steve Chase until August 27. One highlight of the museum this summer will be the Shoulder to Shoulder: Depicting the Human Figure exhibit. Running until Sep.15 in Palm Desert, this exhibition pays tribute to the representation of the human form in different artistic mediums throughout varying cultures and movements. Shoulder to Shoulder consists of artwork from the 20th and 21st centuries, showcasing abstract human shapes and modernist interpretations of the human figure in a unique display. The museum offers free admission every Thursday from 4 p.m. to 8 p.m. and on second Sundays of the month as well.