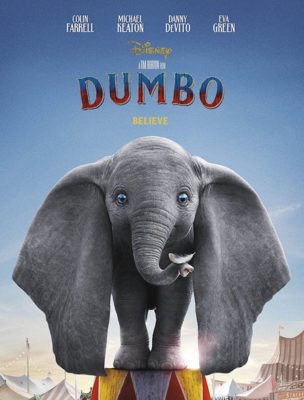 In the unnecessary “live action” reboot of Disney’s 1941 animated feature, many changes have been made.  There’s an off-putting agenda of political correctness that seeps through the admittedly eye-popping images.

When the movie was officially announced, PETA’s (People for the Ethical Treatment of Animals) senior vice president Lisa Lange said this in a letter to director Tim Burton: “We’re hopeful that in your adaptation of ‘Dumbo,’ the young elephant and his mother can have a truly happy ending by living out their lives at a sanctuary instead of continuing to be imprisoned and abused in the entertainment industry.”

The movie’s final anti-circus animal ending goes even further.  Remember, not so long ago when Ringling Bros. and Barnum & Bailey Circus promised to retire elephants from its circus acts amid growing public concern for the animals’ treatment?  PETA wanted – demanded? – Burton do the same onscreen.  But he didn’t really need the prompt, he’s long been against using live animals in this way (“That’s why I don’t like the circus”) and insisted that all the circus animals in “Dumbo,” including his star elephant, be CGI.  However, real dogs and horses do appear.  So, do their lives not matter?  Just asking.

There’s also sense of vintage Disney forced sadness –– naturally with an obvious life lesson at the end that may be distancing to older audience members and smart kids.

When Dumbo’s human friends help the famous flying baby elephant escape the circus, a plan led by Holt Farrier (Colin Farrell) and his two kids, Milly (Nico Parker) and Joe (Finley Hobbins), Dumbo literally flies out of the circus tent, ending up at a dock where he’s reunited with his mother, Mrs. Jumbo, who had been relegated to a cruel freak-show role. The elephants then board a ship bound for their native African home.  A set-up for a sequel?

The children’s goodbye to Dumbo isn’t overly drawn-out beyond the required final hug. Yes, they’re sad, but hopefully aware of the greater good in spite of Dumbo leaving their lives.

I heard groans and some laughter in the audience but no sniffles.  With the purchase of Fox, is Disney well on the way to being the single conduit to ALL future media content?  Hope not, we need diverse voices in all the arts.  The main reason to see this film is the extraordinary production design and not for the contrived narrative.  I missed the wonderful crow sequence — since removed from the earlier film — and thought there was a lost opportunity to include this original sequence without it being racially offensive but rather celebratory.  Oh well. 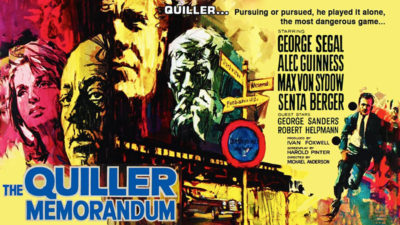 From Michael Anderson, the director of Around the World in 80 Days, Operation Crossbow and Logan’s Run, comes this new 4K restoration transfer of an engaging, spy thriller set in West Berlin during the Cold War.

Similar in tone to such 60’s spy films as The Ipcress File (1965) and The Spy Who Came in from the Cold (1965) both movies, adapted from gritty spy novels (Len Deighton and John le Carré respectively) were low on action but high on procedure and intrigue.

The plot has Quiller (George Segal), an American spy, sent to Berlin by British intelligence to infiltrate a cryptic neo-Nazi group known as Phoenix, after Jones, the previous agent assigned to the task, is killed before he can convey the location of their headquarters to Control.

Once in Berlin, the suave Quiller begins an affair with Inge Lindt (Senta Berger), a beautiful young teacher.  But quickly their lives are put in danger when Quiller is kidnapped and taken to Phoenix’s headquarters, where he meets Oktober (Max von Sydow), the mysterious leader of the group.

Adapted by Harold Pinter from the 1965 novel The Berlin Memorandum by Elleston Trevor writing under the under the name “Adam Hall.”  Besides George Segal and Max von Sydow, the great cast includes Alec Guinness, the beautiful Senta Berger and acerbic George Sanders.

The great looking film was shot on location in West Berlin and Pinewood Sudios, England.  It was nominated for 3 BAFTA Awards (British Oscars), and playwright Pinter was nominated for an Edgar Award for his screenplay.  For more info on this limited edition (only 3,000 units), go to: screenarchives.com. 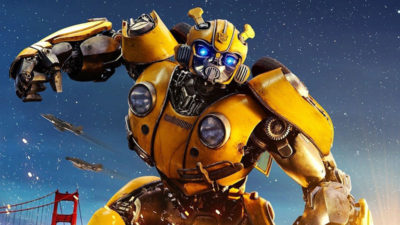 CYBERTRON has fallen.  When OPTIMUS PRIME sends BUMBLEBEE to defend Earth, his journey to become a hero begins.  Charlie Watson (Hailee Steinfeld), a teenager trying to find her place in the world (who isn’t?), discovers and repairs the battle-scarred robot, who’s designed as a Volkswagon Beetle.  As the Decepticons hunt down the surviving AUTOBOTS with the help of a secret agency led by Agent Burns (John Cena), BUMBLEBEE and Charlie team up to protect and yes, save, the world.

The digital 4K Ultra HD release is packed with over an hour of special features, including an all-new BUMBLEBEE motion comic following the beloved AUTOBOT on his next adventure.  Plus, there’s a nice collection of deleted and extended scenes not shown in theaters, including the original opening of the movie, hilarious outtakes, and take a look at G1 (Generation 1) TRANSFORMERS robots on CYBERTRON through the eyes of BUMBLEBEE with exciting Bee Vision.  For a limited time, the Blu-ray Combo Pack also includes an exclusive printed version of the new motion comic featuring BUMBLEBEE in a stand-alone story.  Paramount. 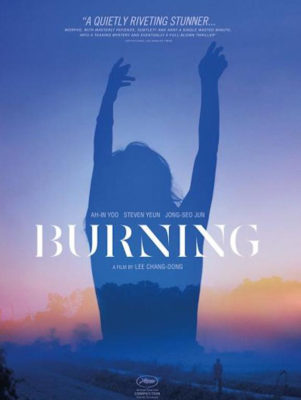 I was transported to mysterious dreamscape that subverted my expectations in a smoldering character study that tells the unsettling story of three individuals and an incident they experience.

Jongsu bumps into old friend, Haemi, on a part-time delivery job.  Haemi asks Jongsu to take care of her cat while she leaves on a trip to Africa. When she returns, Haemi introduces Jongsu to Ben, a man she met in Africa. One day, Ben and Haemi pay Jongsu a visit, and Ben reveals his secret interests to Jongsu.

This puzzling drama pays off, but leaves us to ponder on everything we’ve seen, heard and experienced long after the final credits have rolled.

The film and story unravel bit by bit, like a fever dream burning slowly inside the mind of the audience.

Be warned, you might well spend hours debating the meaning and metaphor of this seductive South Korean drama and still feel miles away from being sure of anything at all.  And that’s the beauty of this remarkable piece of world cinema by Lee-Chang dong, a master of his craft.