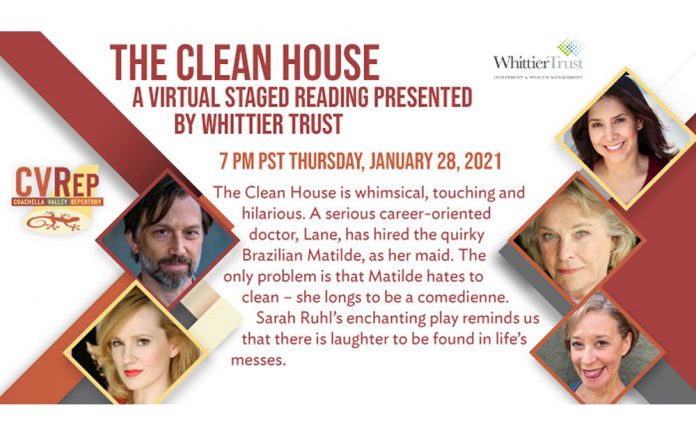 The Clean House is whimsical, touching, and hilarious. The staged reading takes place in what author, Sarah Ruhl describes as “metaphysical Connecticut,” in the home of a married couple who are both doctors. They have hired a Brazilian housekeeper named Matilde, an aspiring comedian who’s more interested in coming up with the perfect joke than in house-cleaning. Lane, the lady of the house, has a peculiar sister named Virginia who greatly loves house-cleaning. She and Matilde quickly become close friends, and Virginia takes over the cleaning while Matilde works on her jokes. Trouble arises when Charles, Lane’s husband reveals his love for his cancer patient named Anna. Ruhl’s enchanting play reminds us that there is laughter to be found in life’s messes.

Returning to CVRep’s virtual stage to direct this virtual performance is Joanne Gordon, who has directed various plays at CVRep. She is an award-winning director whose accolades include five Drama-League Awards, a LA Critics Choice Award, and more. Production credits include: The City of Conversation (CVRep), Evita (The Western Stage), How I Learned to Drive (CVRep), The Goat, or Who is Sylvia? (CVRep), and more.