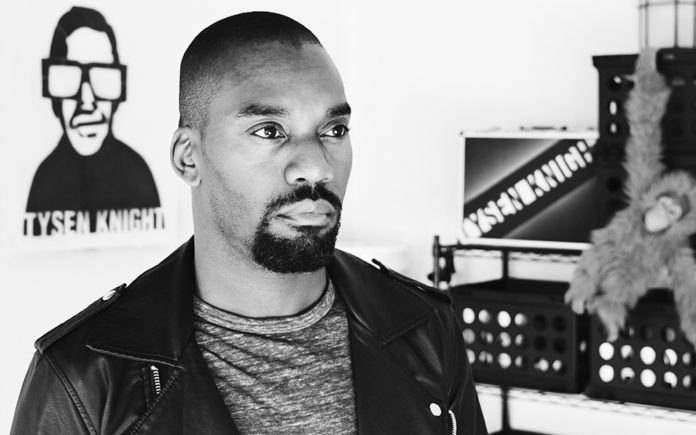 “A small boy with a big dream who is now a grown man, following his dream.” -Tysen Knight

One of the things I love about living here in the Coachella Valley is the unbelievable amount of talent we have residing among us. I recently had the honor of sitting down with Tysen Knight, a multi-faceted artist/filmmaker/actor that lives here in the Valley to talk about how he got his big break and how he segued from actor to artist to filmmaker to mentoring middle school boys.

First and foremost, Tysen explained, he was an artist. From the time he was a young boy, Tysen was fascinated with art. He spent hours copying intricate art pieces and when he got older, started to express himself through the art of graffiti. He also started cutting hair at about eight years old and eventually discovered that his native artistic talent lent itself beautifully to becoming a barber.

Tysen joined a barbershop in New Jersey and quickly gained popularity for not only his talent as a barber, but for his striking good looks and innate sense of humor. As with all barbershops, this one has its share of what Tysen likes to call “S&%# talkers, so when a woman came in and introduced herself as a casting agent, he didn’t think much of it. She told him she was interested in representing him and that he should come by her office for a reading. Tysen quickly forgot about the incident until she returned a couple of months later to find out why he hadn’t yet reached out. This time, Tysen listened. He went to her office and did a reading that he thought was “horrible” and she said was perfect and she signed him immediately. This would be his big break and would forever change the future of Tysen Knight the barber.

Tysen retells the story: “I’ll never forget it was a Friday, she called and said she had an audition for me in New York that day. It was for an R&B video featuring  Lyfe Jennings and Fantasia from American Idol. I walk in this place, there’s like a hundred dudes that look like me. I go in there and they tell me to act like I’m mad at my lady, so I did, and then I left. She called me four days later and told me I booked it, so I booked the very first audition she sent me on.”

Tysen later went on to become a barber for the NFL, and eventually transferred to the NFL networks in LA, which brought him to the West Coast. He continued his modeling and acting career in Los Angeles appearing in several films and on billboards for anti-drug PSAs, but never stopped creating street art in his off time. The artist in Tysen continued to thrive as he became well known, not only for his acting and modeling, but as a street artist in his own right.

Romance brought him to the Coachella Valley and for the first time in his life he was unable to immediately find employment as a barber and instead worked as an artist full-time. He now began the shift from street artist to professional artist and began to gain recognition in the art world. 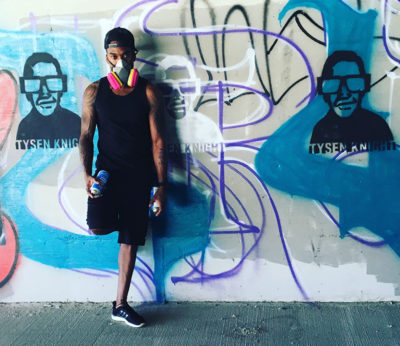 The turning point was his film. Tysen wrote, produced, and directed his first film:  The Art of Hustle, Street Art Documentary and began to earn the attention of the media. Tysen submitted his film to several film festivals and was accepted by the Oregon Documentary Film Festival among several others. Tysen was awarded the “Best Picture” award in Oregon for his very first attempt at filmmaking. He is deeply proud of the fact that his film was completely funded by himself. His dream of bringing Street Art to the big screen was being fulfilled.

These days, Tysen Knight is a very busy man. He recently completed production of his second film which is now in the editing stage. This film focuses on homeless street artists and the art they create.  He has had both public and private shows featuring his art, most recently at Wang’s of the Desert and Club Rouge. Most recently he began mentoring middle-school boys through the medium of art with the BAM (Boys Art Mentoring) program through the PSUSD and Louisa Castrodale.

When I asked Tysen what he was most proud of at this time, he said it was definitely working with the boys and BAM. “It helps me too, a lot of these kids are lacking attention, and I think a lot of them act out because of that. It was important to be with these kids and show them you can be whatever you want out here, you’ve got the talent, and you’re worth it.”

Later that evening, I ran into Tysen at an event, he had two lovely young ladies with him. At the end, he walked them both to their car and made sure they were safe before coming in to say his goodbyes.  This is the type of man he is.  I have high hopes for Tysen Knight’s future, as an artist, as a filmmaker and most of all, as a humanitarian.

About Tysen Knight: Tysen Knight is a world-renowned artist famous for bringing street art to the mainstream art world. His influences include Basquiat, Warhol, and Picasso. From fine art galleries to public murals to street art, Mr. Knight’s work is well represented not only in the Coachella Valley, but throughout the world.  Now an award-winning documentary filmmaker, you can find his full-length feature film, ” The Art Of Hustle: Street Art Documentary” on YouTube. Learn more about Tysen Knight, and purchase his original artwork at: www.TysenKnight.com

About BAM: BAM stands for Boys Arts Mentoring.  It is a program developed by Louisa Castrodale, Arts Coordinator of Palm Springs Unified School District.  Its goal is to maximize motivation and engagement for boys of color, through a dynamic arts and mentoring program.  Lead artists Tysen Knight, Chari Godakanda, Ray Lindsey, Josiah Ihem and Michael Cuevas work with students in painting, world drumming, spoken word and break dance during their visits.  The plan for the program is to grow it over the next several years, so that there is a 6th, 7th and 8th-grade version, as we stay with our boys through their formative middle school years. The website for BAM is https://bam.psusd.us