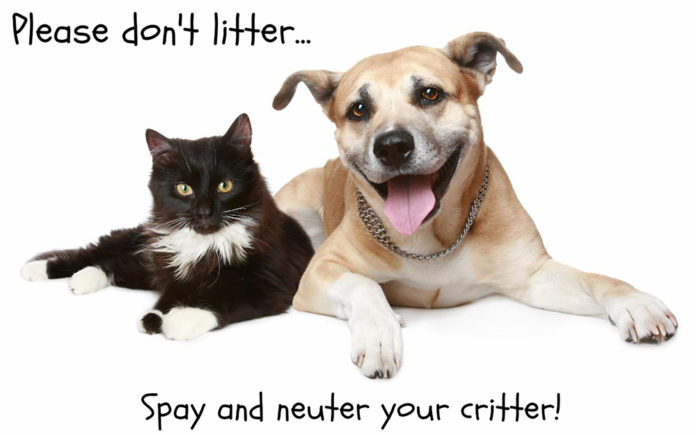 The key to creating a nation of “No More Homeless Pets” is availability of low cost spay and neutering for dogs and cats.  While we have made great strides at saving more homeless shelter animals, there continues to be a shortage of available homes for the continual influx of abandoned and relinquished animals.  Have you failed to get your pet spayed or neutered?  Here are just some of the many reasons why you, your community, and your pet will benefit from having them sterilized:

YOUR PET WILL BE HEALTHIER

The procedure improves your pet by reducing the risk of certain cancers, such as testicular cancer in male animals.  Spay/neuter also reduces the tendency of animals to fight with each other, preventing fight related injuries and dangerous viruses spread through bite wounds.

YOUR COMMUNITY WILL BE HEALTHIER AND SAFER

Did you know that 85% of dog bites to people are from intact male dogs?  In the horrific instances where humans are maimed or killed by a dog, the offending animal is almost always an unneutered male.  Pregnant or nursing female dogs are at increased risk of biting.  Unneutered male dogs can smell a female dog in heat miles away, and will find ingenious ways to escape, causing problem issues for your neighborhood.  Communities spend millions of dollars to control and house unwanted animals, with taxpayers footing the bill.

YOUR PET’S BEHAVIOR WILL IMPROVE

Some people still believe spaying and neutering will create behavior problems.  Contrary to those concerns, they become less aggressive, more relaxed, and more affectionate with their humans.  Unwanted behaviors such as mounting other dogs and male “leg lifting” will likely be reduced.  Neutering & spaying cats reduces spaying, howling, escaping, and other troublesome behaviors.

SHOULD MY PET HAVE AT LEAST ONE LITTER?

One local rescuer had a quick response when her neighbor wanted her cat to have a litter of kittens so her children could witness the miracle of life.  She told her neighbor they should consider the “miracle of death” that happens at public shelters, and the shocked woman decided to get her animal spayed instead.  Foster a shelter animal with a litter of kittens and puppies to teach children about life’s miracles and saving animals.  Research shows animals spayed before their first litter are actually healthier.

Only by reducing their numbers will we prevent the millions of unwanted animals that lose their lives in our public shelters and on our streets.  It is estimated that between six and eight million cats and dogs enter our nation’s public shelters every year.  Three million of those animals, whose only crime is being homeless, will be euthanized there, despite the fact that 80% of them are healthy, treatable, and could be adopted into new homes.

HOW MUCH WILL IT COST?

Cost can vary, sometimes depending on the sex and size of the animal, so check with your veterinarian.  Two local organizations provide very low cost spay/neuter, along with vaccines and microchipping.  Their mobile spay/neuter units travel the Coachella Valley to provide accessible services.  Therefore, lack of funds is no longer an excuse to delay this procedure.  Contact Coachella Animal Network at (760) 848-4284 or SNIP at (925) 895-8531.

Contact your veterinarian today and make an appointment to get Fido or Fluffy spayed or neutered.  They will be happier, healthier, and live longer!