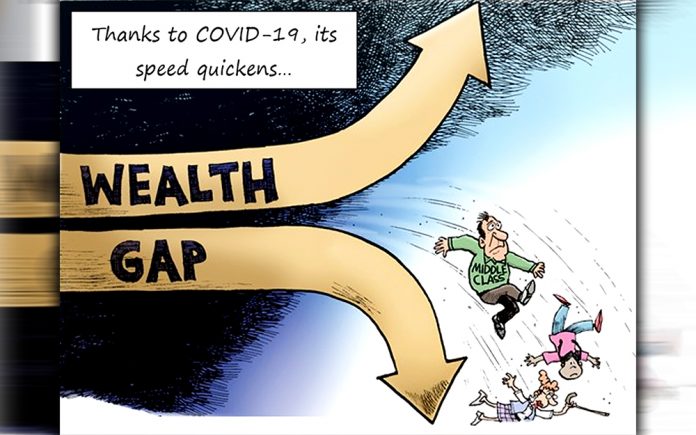 With the reopening of the world starting to get underway, unemployment is expected to remain somewhere north of 10% in the United States through year-end.  Here in the Coachella Valley, we can expect significantly higher numbers on assistance as tourism and special events like Coachella and Stagecoach cannot be expected to return to pre-COVID19 levels anytime soon.

By closing the United States, our $2 trillion per month economy shrank to something between $1.3 and $1.6 Trillion.  This means that the economy will have taken a hit of $4-5 trillion by the end of May.  Early estimates for the cost of the pandemic on the federal government is $10 trillion which equates to $30,300 per person.  Costs are expected to be paid for with the issuance of US Treasuries.  Similarly, many companies and households will survive the pandemic through the use of debt.

Higher debt means lower discretionary spending.  Lower spending means that businesses earn less and have fewer jobs.  Fewer jobs means that there is less for government coffers to pay for basic necessities, underfunded pension plans and whatever economic development plans are necessary to restart growth.  This negative cycle feeds upon itself until new seeds of growth emerge.

Consider that the same thing happened throughout the countries of the world.  Most of these countries did not have funds needed to protect their people leading to far graver near-term problems.  As our nation financed a multi-trillion-dollar piece of our quarantine, pain will be felt by many for years to come.

For those avoiding much of the near-term pain due to good planning or an unaffected job, you too will fill a pinch in your pocketbook, and it comes in the form of future inflation.  Inflation causes the price of the things that we buy to go up.  In recent years, higher costs in domestic food were offset by lower costs for televisions, clothing and interest payments as well as higher productivity levels.

A little Inflation works fine so long as your income increases by at least the same rate as inflation.  If you are on a fixed income as is the case with many seniors and an increasing percentage of Americans, it becomes difficult to keep up with the increasing costs of food and medicine.

This same principle applies to federal debt but not necessarily in the way you might have been thinking of it.

Let’s assume that you finance say $10 Trillion in debt over 30 years at 2% and cannot afford to make interest payments on that debt either.  After 30 years, you owe roughly 3 times more or $30 trillion.

That level of debt should surely cause inflation.

If inflation is at 4%, $1 today will be worth about 30 cents in 30 years.  As a nation’s currency is a reflection of the value of all goods and services in a country, by financing the debt at a rate that is 2% less than the inflation rate, the issuer of that debt created $134 in value.  As a country, our economic prospects are fine although people relying on fixed income get hurt a little bit more each year.

While we can all have confidence that the American economy will grow and remain one of the strongest economies in the world, the sharing of this wealth is where we have a major disconnect as a country.    As we have seen during the shutdown, the wealth of this nation is concentrated in the hands of a few.  If early trends continue, the pandemic will expedite existing trends.  This means that many middle and middle-upper class jobs will be permanently eliminated as companies look to use technology to create the greater efficiencies required to pay for costs associated with the new normal.

Haddon Libby is the Founder and Managing Director of Winslow Drake Investment Management and can be reached at Hlibby@WinslowDrake.com.  For more information, please visit www.WinslowDrake.com.