Will Donato won ‘Best Instrumental Jazz Artist’ at the Coachella Valley Music Awards last May. He is one of the nicest and most talented people I have ever met. We had a great phone conversation last week about what he’s been up to. I would like to start with a little background.

I met Will Donato in 2010 after my late husband told me to “Go to the Riviera” as I was driving downtown to have a bite to eat. Len (my late husband) and I had talked about going to hear the jazz by the pool that they offered but never made it. This was the most direct afterlife communication I had from him and I of course pulled into the resort. I asked the valet if they had jazz by the pool? He said they were starting it today again at 5. So I went in. It was a Sunday afternoon about 4 and as I took a seat I was the only soul in the place. By 4:30 I was beginning to wonder if anything was going to take place when in walked the cutest guy with a sax, a dazzling smile, blue specs, and a personality to match his looks, Will Donato. He was joined by vocalist Shon Reddick and his long term musical mate, bass player Eddie Reddick. Together they make up ‘Art of Sax’ now celebrating 27 years in the music business. The three of them serenaded me shamelessly, dazzled me to no end and they instantly became my favorite band.

I became a follower of theirs and would make the trek to the Hyatt Regency in Indian Wells on Friday’s and Saturdays to see them play and came to be a friend of Will’s aka my ‘Big Brother’. Right after I met him, Will was diagnosed with cancer (something I had just lost my husband to) and I was devastated. Through the love of his wife, family and some great doctors at Mayo Clinic who operated on him with an experimental laser, his throat and life were saved. He would have been unable to play the sax anymore. It was a miracle made of prayers from so many and a will to live. That is what brings me to my story about Will.

He talked about his 27 year long term career with his band Art of Sax.  Eddie Reddick has been with him since the beginning. He told me stories about how at one point they were playing every single day of the week and after a couple of years of that, they decided to take Mondays off. He said they didn’t know what to do with themselves.

He’s still plays 5-6 nights a week driving from the desert to the coast and back again. I would find this exhausting but he said it prepares him for the national tours. He mentioned that the ‘A list’ all tour the world at a dizzying pace and if he wanted to get to the top he had to train for it. He considers this his training.

Will is more than the entertainer, showman that leads Art of Sax in the best R&B and dance music 6 nights a week all over Southern California. He is also an ‘A List’ artist with hits of his own. He also has a national career which has come more and more into play the last few years. 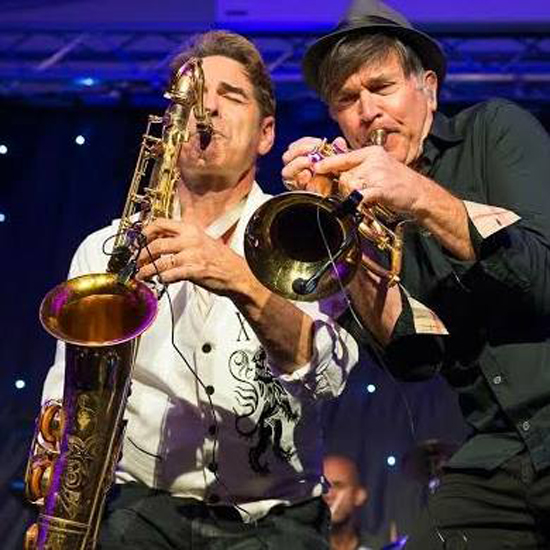 He just got back from Portugal where he played with Rick Braun one of the ‘A List’ smooth jazz artists at the top of the game. One of the things I love about Will is his constant praise and support for everyone else. Even though the interview is about Will, he told me how much he is learning from Rick Braun. He enthused about how Rick sends his charts, handles his rehearsals and even how the green room is handled.  Leave it to Will to notice the details. As a side note, Will was the’Valedictorian of his class.

Will has had a string of hits his most memorable was his song “Funkability” from his CD What it Takes, which made the top 50 smooth jazz hits for 2010.

He’s working on his next CD Supersonic due in 2017. He’s enjoying writing new songs for it and wrote one he’s calling “Gravitas” over the Thanksgiving holiday. His schedule has picked up and he’s joined the jazz cruises and is flown all over the world for concerts. He said it’s such an amazing gift to be paid to play his originals to people who came to hear them.

I’ve called him the ‘hardest working man in the music business’ and have seen drive to San Diego on a Sunday morning, play a wedding in the afternoon on the coast and come back to play in the desert at night. That’s dedication!

Will mentioned to me that he books over 200 gigs a year which is no small feat especially in an overcrowded field of musicians. In addition to that he travels to his national gigs all over the world. I asked him if he ever gets tired of the travel? He spoke of how he wakes up every morning saying “I have another day!” He says he loves to travel and even when he takes his morning walk he visualizes himself walking terminal to terminal.

It’s one of the few times that he sits by himself and writes music. He also loves the hotels and places he gets to visit. For Will, it’s a labor of love. Coming from a cancer survivor it should give us all pause on how amazing life really is.

Will Donato and the Art of Sax play Friday and Saturday nights at the Indian Wells Hyatt from 8-12. For details visit www.willdonato.com.