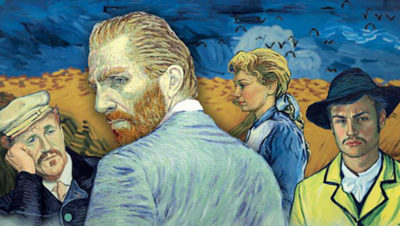 Six years ago Darota Kobila and Hugh Welchman came up with the idea to create the world’s first fully painted feature film.  The subject?  The final days of Vincent Van Gogh.  The aura of mystery, madness and perhaps murder saturates the narrative that brings to life the world of Van Gogh as if he painted it.

The story focuses on what might have happened assuming the artist did not really kill himself but was in fact murdered.  The plot centers on Arman Roulin, the son of Van Gogh’s friend, postman Joseph Roulin, who travels to Avers-sur-Oisee investigating the truth about the artist’s death.  Along the way he meets the artist’s physician Dr. Gachet, the doctor’s daughter Marguerite and the keeper of the inn where the artist stayed.

Why tell it in oil paintings?  “You can’t without his paintings,“ Kobiela says.  In fact, in a letter Van Gogh wrote a week before he died, he says: “We cannot speak other than by our paintings.”

Regarding his painting of the reaper in a wheat field, he wrote: “I saw in the reaper the image of death.  But in this death nothing is sad, it takes place in broad daylight with a sun that floods everything with a light of fine gold.”

During the last eight years of his relatively short life, he totally immersed himself in his artistic quest (or compulsion) and completed over 800 paintings – only one of which was sold in his lifetime.  Van Gogh was posthumously proclaimed “The father of modern art.”  His last painting to go up for auction brought in close to $100 million. 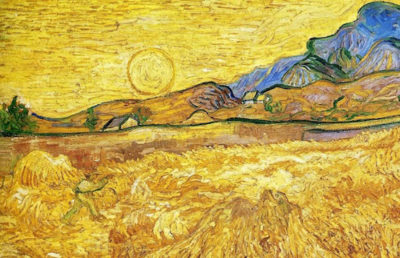 It took 4 years to develop the technique to craft the 90-minute film and 2 years of production.  A total of 125 artists created about 1,000 finished canvases.  Each shot was transferred to a Van Gogh-like painting.  It was a complex process.  To capture changing backgrounds, facial expression and movement, each canvas was repainted an average of 76 times.  However, based on the action or length of the shot, some scenes required multiple canvases, each of which the artists updated to sustain the illusion of movement and life.

Between them, the artists executed a total of 65,000 frames in oil paint.  Each second of the finished film is equivalent to 12 frames.

This beautiful film has an eerie, emotional power that reminds of the necessity of art to assist in maintaining our humanity.  Van Gogh wrote: “I want to touch people with my art.  I want them to say, he feels deeply.” 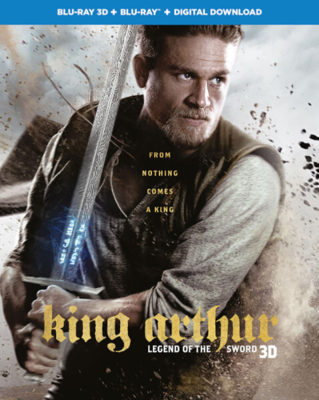 Guy Ritchie brings his dynamic style to the epic fantasy action adventure starring Charlie Hunnam in the title role.  The film is an iconoclastic take on the classic Excalibur myth, tracing Arthur’s journey from the streets to the throne.

Ritchie directs from a literate screenplay by Joby Harold.

When the child Arthur’s father is murdered, Vortigern (Jude Law), Arthur’s uncle, seizes the throne.  Robbed of his birthright and with no idea who he truly is, Arthur comes up the hard way in the back alleys of the city.  But once he pulls the sword from the stone, his life is turned not just around, but upside down and he is forced to acknowledged not only his legacy but his fate – whether he likes it or not. 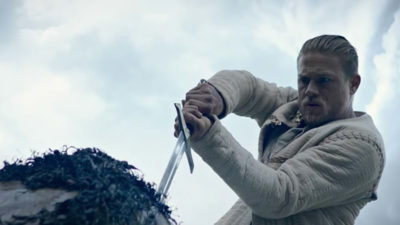 This great looking  (the 3D is especially effective) and engaging film is loaded with watchable making-of, and on-set extras.  I liked the featurettes on building medieval Londinium, Legend of Excalibur, Parry the Bleed (on sword fighting), Scenic Scotland (location tours), Inside the Cut (how action choreographer staged the wonderful set-pieces) and much more.  This timeless tale is a stunning home video treat — is even more so in Ultra HD, Blu-ray 3D.  Recommended for the digital home library because it’s worth seeing more than once.    Warner Bros.