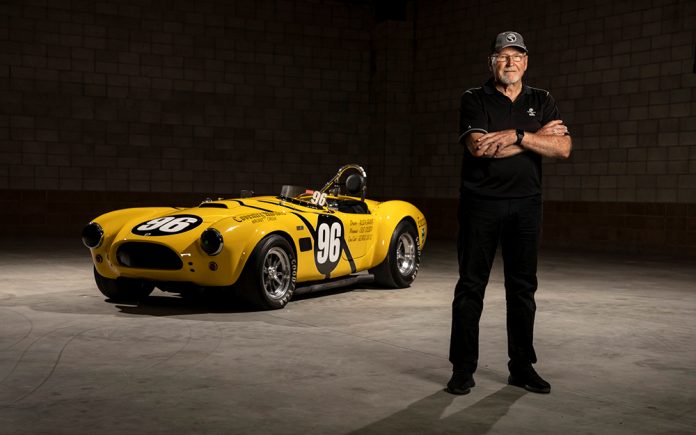 Famed Shelby racecar driver Allen Grant has put up his Shelby GT350R as the grand prize for a sweepstakes fundraiser the Palm Springs Cruisin’ Association (PSCA) is holding to raise money for the Desert Cancer Foundation. The PSCA is an all-volunteer non-profit organization whose purpose is to promote camaraderie among car enthusiasts and to stage and promote charitable car events. The Desert Cancer Foundation was founded more than two decades ago to pay for treatment of cancer patients who lack health insurance or sufficient funds to pay for their medical care.

The Desert Cancer Foundation has paid for cancer related screening, diagnosis, and treatment for more than 8,000 local residents valued at more than 82.4 million dollars, at a cost of only 9.4 million dollars. The PSCA also sponsors the Dr. George Charity Car show at the Indian Wells Tennis Gardens, which is named after the Desert Cancer Foundation’s co-founder Dr. Sebastian George, the late oncologist who treated many of the car club members. 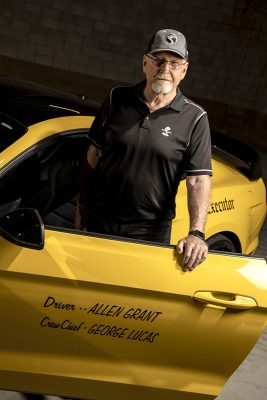 “I decided to contribute my Shelby GT350R Mustang because I wanted to help the PSCA raise money for the Desert Cancer Foundation. I learned about the Foundation when I moved to the desert a few years ago and got involved with PSCA and the Dr. George Car Show. Upon learning that the Desert Cancer Foundation gave money to cancer patients who lack health insurance or money for treatment, what amazed me was that every dollar raised provides 10 dollars in cancer care to the patient,” said Grant.

Grant began racing an AC-Bristol in Northern California. The AC was later the basis for the AC Cobra after Carroll Shelby began manufacturing the cars with Ford V-8s rather than the two-liter Bristol engine. Shelby recognized his talent and drive and he was soon working in the office.

There, he had dealer contact and convinced Coventry Motors in the San Francisco Bay Area to sponsor him in a Cobra. Grant’s thought was that if he could do well, he could convince Shelby to add him to the works team. His first race for Coventry was Santa Barbara in September 1963 and he won both the preliminary and the main. After more wins in the Cobra, Grant ended up in a Cheetah-Chevrolet for the 1964 season.

Finally, in 1965, Grant’s original plan came to fruition and he joined the Cobra team, which was now armed with the Peter Brock—designed Cobra Daytona Coupe. Allen’s placings added to the Cobra’s points total which won the team the Sports Car Manufacturers World Championship, which is the only time an American car manufacturer has won this elusive title.

He kept the 1963 Lola GT he bought while racing in Europe. Ford had used it for a testbed for their GT-40’s. It is now restored and is a much sought after example of 60s racing technology.

building commercial properties, hotels, and thousands of homes. Grant now owns and operates Grant Development Company in Thousand Palms. He is currently developing a 36-unit toy garage condominium project in Palm Desert which he hopes to start construction on in the near future.

Those interested can donate to the Desert Cancer Foundation for a chance to learn to drive the high performance GT350R during a track day with Shelby American World Manufacturers Championship team driver, Allen Grant. The winner will also win rare original Shelby American memorabilia from Allen Grant’s personal collection. 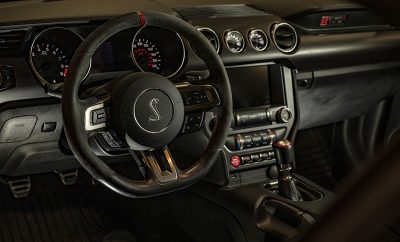 “The Shelby GT 350R is an amazing car! It is an awesome street car and a race car all in one. It is as happy on the race track as it is on the street. I ordered the car in bright yellow and added the two black strips to replicate the livery of the Cobra that I raced early in my career. The paint scheme of the Cobra was designed by my crew chief George Lucas before he went to USC film school and started making movies,” revealed Grant.

Performance features of the car include a 5.2L Ti-VCT V8 with 526 hp and 429 lb.-ft of torque, advanced suspension including the MagneRide™ damping system, Brembo™ brakes which are the most powerful brakes in a production Mustang, 19” Carbon Fiber Wheels and Michelin Pilot Sport Cup 2 tires, an R-Electronics Package, Voice-Activated Touchscreen Navigation System, Painted Black Roof, and an extra set of aluminum racing wheels.

To donate and enter the sweepstakes, visit https://palmspringscruisinassociation.tapkat.org/winallengrantsshelbyGT350?promo=AG25. The sweepstakes ends on May 22 at 3 p.m. The drawing will take place on the same day at 4 p.m. Use promo code PSCA1 for 20% bonus tickets.