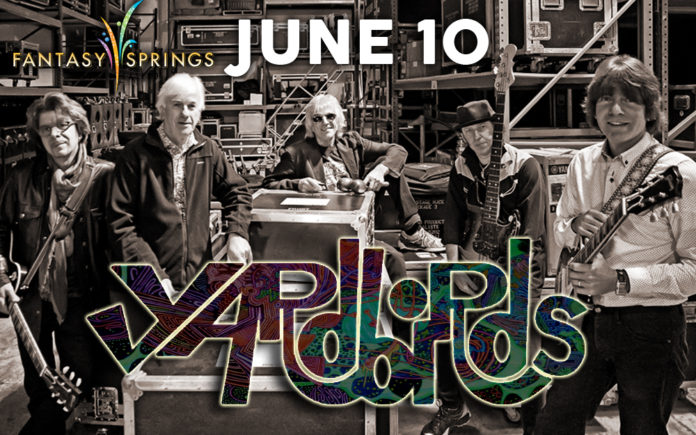 The British are coming! The British are coming! Well, at least one Brit will be.  Founder of The Yardbirds, Jim McCarty will lead a lineup of American musicians to play some of rock and roll’s greatest hits all across the country as their tour bus anticipates a raucous stop at Fantasy Springs Resort and Casino in Indio, CA next week (June 10th) after coming out of the fog of summer time San Francisco. The Yardbirds are more than a Rock band…they are an institution…which, in the brief period from 1963 to 1968, made an indelible mark on the “Shapes of Things” to come and perhaps shaped what is yet to still come.

Rolling Stone said this about the band:

“The Yardbirds may not have been as famous as their British Invasion contemporaries the Beatles, the Rolling Stones and the Who, but the pioneering blues-based combo introduced three of the most famous and influential guitarists of the rock era: Eric Clapton, Jeff Beck and Jimmy Page. Their innovations — a revved-up instrumental attack, controlled use of feedback, distortion and fuzz; and live, improvisational jams they called “rave ups” — paved the way for psychedelic rock, progressive rock, heavy metal, Southern boogie and even punk.”

The lineup is an incredible group of musicians:

Formed in 1960s’ London, The Yardbirds boasted some of the most infamous guitarists of all time – Eric Clapton, Jeff Beck, and Jimmy Page. Co-founded by McCarty with singer Keith Relf, rhythm guitarist Chris Dreja, bassist Paul Samwell-Smith, and lead guitarist Top Topham, the band unleashed a string of hits, including “For Your Love,” “Over Under Sideways Down,” and “Heart Full Of Soul,” and in turn, influenced generations of musicians and fans.

JM: “Well, it’s not so full on. It’s shorter tours now. I really like it because I can come back fresh between the mini-tours.”

CVW: How has touring changed over the years?

JM: “Well, the tours are shorter now, only 2-3 weeks at a time. I can go home. I’m living in France now in a quiet place so I can relax between the shorter tours rather than be on the road constantly. Touring is more streamlined now.”

CVW: What has improved the most?

JM: “The whole sound reproduction is much better than it once was back I the old days. The PA’s are much better, you can hear what you are doing and really project a more enjoyable experience to the audience, you know.”

CVW: What can we expect from this show?

JM: “We will be doing all the hits! We will be playing quite a bit of the blues covers we like to play, and will be drinking some Muddy Waters, too! We will play several songs from the Birdland album as well.”

CVW: Creatively speaking, how do you keep all of these songs fresh?

JM: “There is a lot of space for improvisation. Every time we play a song, it’s a little bit different. It was left over from our policy in the old days to never know what’s coming. I think some of the old songs still sound really good.”

CVW: I think that’s a testament to the genius you created. These songs have had so much influence on the music and sound that is still popular today.

JM: “Thank you. I guess that’s a good thing! I appreciate your words, mate.”

CVW: What’s different about being a touring musician now?

JM: “It’s much more under control! (He laughs) It really is more planned. We were full on pioneering what touring was back then. We were not even sure what we were doing. Just driving around and playing. We didn’t know what to expect. Now, we have a good idea of what to expect. It’s still rock and roll and there are surprises but at least we know what we are doing now.”

CVW: Have the years given you more wisdom on how to approach touring?

JM: “Yeah…thankfully! We were all young and traveling together. That wasn’t always a good mix. We had a lot of egos. As old guys, we honor each other (as musicians) rather than back then we were all trying to compete with each other. There is a lot more give and take in the band with these guys.”

CVW: What is different about this version of the band?

JM: “I think this is the best version of the band since the old days. The musicianship is incredible. Anyone can play these songs but it’s the way they play at such a high level that makes it so special to experience. We don’t know where the music will go some nights but we trust each other and support the creative flow for the music. It comes together really nice.”

CVW: Will you have a big theatrical or visual element to your show?

CVW: What does it mean for you to be touring with the band more than 50 years after you started?

JM: “It’s really surprising. It’s incredible when you think about it. I never thought it would last this long. It’s amazing how long memories last and how people remember the music and still want to hear it. I’m lucky to play music.”

CVW: What’s next for you?

JM: “We are thinking about writing some new material. I write and do my own solo project as well. Every thing is going together nicely. Sometimes, I was just hanging in there, you know. I’m lucky to still be playing and doing music.”