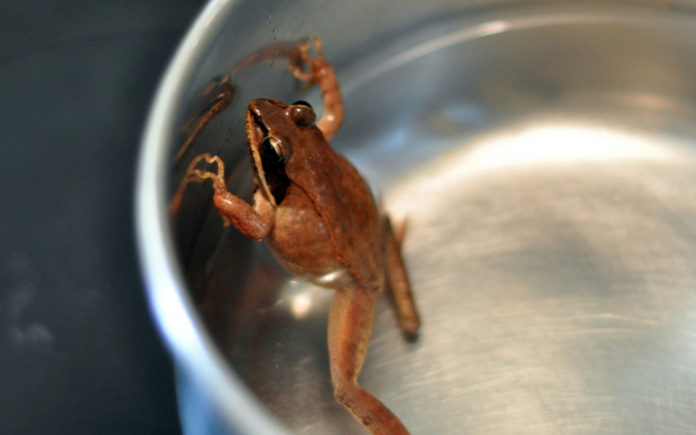 Have you heard the fable about boiling a frog?

Back during the 19th century, a fable circulated the world on how to boil a frog alive.  In the 1860s, German physiologist Friedrich Goltz decided to test the folklore on our warty friends.  His experiments proved that putting a live frog in a pot of boiling water would indeed cause it to jump out immediately as told in the fable…which makes sense.  The only way that Dr. Goltz could get the frog to sit still in the water was to slowly increase the water temperature…and remove its brain.  Goltz proved that Zombie frogs boil while regular ones have the common sense to get out.

While the fable was proven to be false, its meaning is clear – rapid change causes an equal or stronger reaction from those you are imposing the change on whereas a slow and gradual change will often be met by indifference and passivity.

For many retired Americans, and those living near or below the median household income, their finances are facing the same fate as that Zombie frog due to the slow, value-eroding impact of inflation.

In 1989, the typical household earned $50,000.  Over the next thirty years, wages rose an anemic 0.6% rate annually to $60,000.  This stagnation in wages is in part due to a number of things including the loss of manufacturing jobs to lower cost countries and better wage control by large employers.

While wages have grown slowly, costs have not making healthcare insurance and preventative care unaffordable for many.   The average American has gone from spending 6% of their income on healthcare in 1989 to 19% today.

At the same time, the cost of a new car has tripled to $36,000 which at a 3.7% annual growth rate in wages over that period.  Gas prices have increased at the same rate.

On the surface, the cost of buying a home has hit people the most, rising from 2.8 years to 5.2 years of a household’s annual income.  While the cost has gone from $140,000 to $310,000, home ownership has remained fairly constant with 2/3rds of Americans owning their home.  What has helped people to still afford homes is a drop in the 30 year mortgage rate form 10.3% in 1989 to under 5% today.  While debt levels increased significantly, lower rates mean that annual payments have grew by only $250/month over 30 years.

Looking at basic food prices, a gallon of milk has remained relatively stable as dairies figured out more efficient production methods which include the heightened use of antibiotics.  A loaf of bread has grown at a 5% clip to $2.78/loaf. 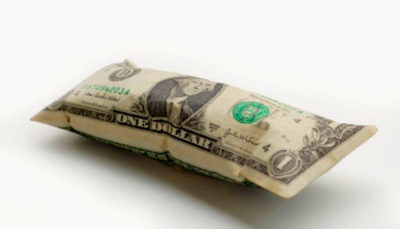 The cost of mailing a letter had been increasing at 2.2% per year since 1989 until the 10% price increase earlier this week.  That said, we all mail a whole lot less letters today than we did in the past due to the advance of email, texts/instant messaging and cell phones.

Meanwhile, the Consumer Price Index from which many government payments are calculated (like Social Security) has been changed so that it does not increase as quickly as inflation meaning that beneficiaries have less and less to get by on every year.

When it comes to your money, remember that the value of that $1.00 today declines by three cents every year due to inflation that is cause by rising prices and the U.S. Treasury printing more money.  To stay even, you need to earn 3% a year on your funds.

For comparison, the Dow Jones Industrial Average has averaged a 7.5% annual return since 1989 while the S&P has averaged 9.5%.

Haddon Libby is a Fiduciary Advisor and the Founder and Managing Partner of Winslow Drake Investment Management.  For more information, please visit www.WinslowDrake.com or email Hlibby@WinslowDrake.com