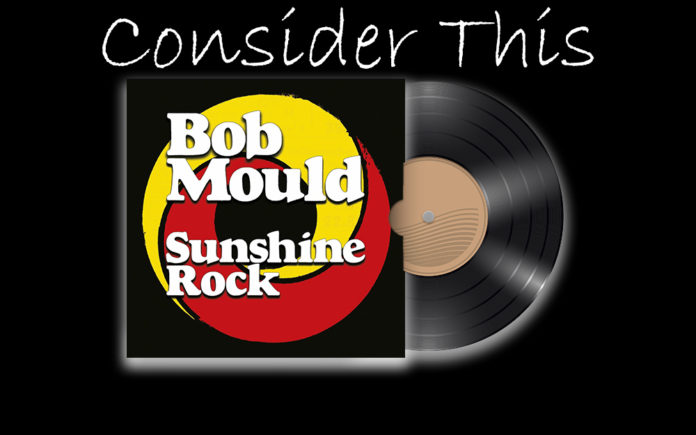 “I’m clutching my stories, a satchel full, a cache of indignation, where did I put my sense of misplaced rage?”

That’s Bob Mould having a moment of self-refection on “The Final Years,” a song from his new album.

About 40 years ago, the Minneapolis music scene produced a holy triumvirate of Punk bands, Husker Du, the Replacements and Soul Asylum. All three bands started in garages, toured in grotty vans, played in dive bars and sometimes slept on the floors of enthusiastic fans. They also graduated from indie labels to the majors, and each enjoyed critical acclaim, and a modicum of success. Inevitably, these bands broke up, as bands do. Solo careers were launched, and some continue to thrive to this day.

Such is the case with Bob Mould. Born in upstate New York, in 1960 his family migrated to Minnesota and he ended up attending Macalester College. In 1979 he formed Husker Du with bassist Greg Norton and drummer Grant Hart. Bob played lead guitar, he and Grant split songwriting and vocal duties.

Named for an obscure Swedish board game, the trio made a name for themselves locally and were quickly signed to SST Records. The California label’s roster included seminal bands like Black Flag, Minutemen and Saccharine Trust. Husker Du established a sound that fused Hardcore Thrash with a sharp sense of melody. They made five records on SST, including Zen Arcade a groundbreaking, double LP released in 1984. The following year, they left SST for Warner Brother Records, where they made three more albums.

The three-piece toured relentlessly and the mainstream press began to take notice. College Radio became a viable alternative to commercial stations, introducing artists like R.E.M., Love And Rockets, Robyn Hitchcock, Camper Van Beethoven to discerning music fans. As Husker Du’s fan base increased, their success laid the groundwork for the next wave of bands like Sonic Youth, Dinosaur, Jr. and the Pixies. Ultimately, they paved the way for the Alternative and Grunge movements that exploded in the early ‘90s.

Even as they tasted success, the intense rivalry between Bob and Grant became intractable and Husker Du called it quits in 1987. Bob immediately jump-started a solo career, releasing his debut, Workbook in 1988 and quickly returning the next year with Black Sheets Of Rain. Acoustic, introspective and reflective, each album was the complete antithesis of the melodic thrash style he pioneered with the band.

Going solo had its advantages, certainly Bob enjoyed the autonomy, but he seemed to miss the band dynamic. By the early ‘90s, he founded the Power Punk trio, Sugar with bassist Dave Barbe and drummer Malcolm Travis. Drafting off the indie-cred he had earned with Husker Du, the new band’s sound was commercial without compromise.

Signed to the Rykodisc label, they released two long-players, Copper Blue and File Under Easy Listening, along with the Beaster EP. But the sweet success of Sugar quickly soured when Spin magazine publicized the open secret that Bob was gay. By 1995, the band had amicably parted ways.

Once he had been “outed,” Bob embraced his Gay identity. Returning to his solo career he recorded six solo albums between 1996 and 2009, he also made time to become a scriptwriter for the WCW, (that’s World Champion Wrestling, to you). A version of his “Dog On Fire” song, performed by They Might Be Giants has been the frenzied theme for “The Daily Show” since the late ‘90s.

In 2011, he wrote “See A Little Light: The Trail Of Rage And Melody.” A candid autobiography, the opening paragraphs find our hero staying at a Gay, clothing-optional Hotel in Palm Springs, anticipating his Coachella debut.

That same year, his music was celebrated at Walt Disney Symphony Hall in Los Angeles. The line-up of artists performing songs from his solo cannon included Margaret Cho, Grant Lee Phillips, Dave Grohl, the Hold Steady and Ryan Adams. In 2012 he signed with Merge Records and released Silver Age, which featured bassist Jason Narducy and ex-Superchunk drummer, Jon Wurster. The album actually climbed to #52 of the Billboard Top 200.

He used the same line-up on his next to efforts, 2014’s Beauty & Ruin, and Patch The Sky which arrived two years Later. Each record dealt with the death of a parent. Now he has returned with his 12th solo effort, Sunshine Rock. The record’s first four tracks careen out of the speakers with an explosive urgency.

The title track kicks off the 12-song set with a locomotive rhythm, sugary backing vocals and a fusillade of guitars. Wry and wildly romantic lyrics set the scene; “I feel a cool breeze blowing through my beard, I roll the top down falling on my back, I hear your heartbeat in my ears.” As whiplash guitars swirl cyclonically, roiling bass and thumping drums provide a sonic backstop. Following the break Bob offers this urgent carpe diem; “Life is but a dance inside the power plant, so when the lights go down and people fade away, there is no second chance, there is no second chance/I reach into the sky and grab the nearest shooting star, breaking it in two, I hand my half to you.” A sustained power chord acts as a melodic bridge to the next song.

“What Do You Want Me To Do” amps up the energy with a pummeling backbeat, ricocheting bass lines and wind-milling guitar. Bob’s mien is equal parts sarcastic and indignant as he demands “What do you want me to do? I’m stranded in a forest of barely formed intentions, and you, you left me waiting for way too many years/When You land in eternity I hope you save a little place for me.” A feedback-y outro segues into the deceptively titled “Sunny Love Song.”

Marauding guitar riffs match a walloping backbeat and slivery bass. As Bob recalls a failed romance the mood shifts from winsome to rueful to introspective within a few deftly turned phrases; “It’s a long, long way from California to Berlin, so filled with melancholia/Winter came and paralyzed me, thrown like gravel over ice/I’m like a Polar Bear crawling through the Tundra of some penumbral paradise.” There’s a bit of a sea change on the break as emotional clouds part over carnival keys and a slashing guitar solo. The tune barely winds down before flowing into “Thirty Dozen Roses.”

This barbed mea culpa is powered by thrashy guitar, serpentine bass and a blitzkrieg beat. It’s a slab of the anarchic Punk sound Husker practically invented. Here, Bob’s idea of an apology is to explain “some days my brain blows up in an elegant way.” As distorto guitars rachets up the tension, a measure of sincerity is added to the mix; “I’m such a lousy prick to you, chocolate doesn’t faze you anymore, you found a sweeter filling, this is rotten to the core/The swollen hollow of my wobbly heart, thirty dozen roses, that might be a start.”

The album’s best three songs slow the action, offering an uncharacteristic respite from the trademark calibrated chaos. The aforementioned “The Final Years” blends stately keys, a propulsive rhythm and shimmery guitar. To paraphrase Olivia Newton John, has Bob Mould ever been mellow? The answer here is a surprising and resounding yes.

“Sin King” seems like a not-so-subtle dig at the current White House resident, and a clear-eyed comparison between him and the grown-up that had the gig before him. Chiming guitars, rumbling bass and a flailing beat bookend every verse. The current combative political climate has resulted in a haze of malaise; “Years ago we used to be so proud and free to speak our thoughts out loud/Now all this ugly friction, it wears and tears me down.”

Finally, “Camp Sunshine” has to be the sweetest song Bob Mould has ever recorded, a jangly slice of nostalgia cloaked in feathery acoustic riffs, twinkly glockenspiel and a tick-tock rhythm. The lyrics paint a picture of a bygone era when “the days I get to spend making music with my friends are always most important to me.” He also acknowledges the ravages of time; “I think about the kids I used to see, some get sick and pass away, others find a different place to play.” Ultimately, this wistful reverie offers some hard-won wisdom; “People get together, people fall apart, people do the best they can/We can’t predict the future, we can’t forget the past, just enjoy the moments that we have.”

Other interesting tracks include the cautious optimism of “Irrational Poison,” the penitent hopscotch of “Lost Faith” and a feedback-drenched version of the Shocking Blue’s “Send Me A Postcard.” Meanwhile, “I Fought” serves as a combative elegy to Grant Hart. His erstwhile sparring partner and Husker Du-mate died in September of 2017, following a battle with liver cancer.

The album closes with “Western Sunset.” Something of a blustery denouement, it features cello and lush orchestration. The lyrics act as a backhanded expression of gratitude; “Music floats in the sky then it disappears (I don’t know how) So grateful you gave me time to bend your ears (But it’s over now)/I wasn’t trying to reinvent the wheel (the wheel was fine), only want you to know how I really feel (it’s yours and it’s mine).”

Ten years in, it feels like Jason Narducy and Jon Wurster have become Bob’s perfect partners in crime. This is a solo album in name only. Sunshine Rock perfectly distills Bob Mould’s past and present. It should be no surprise that the guy who lovingly covered “Love Is All Around” (a.k.a. the theme from “The Mary Tyler Moore Show”), with Husker Du, could craft a record that perfectly calibrates the bitter and the sweet.