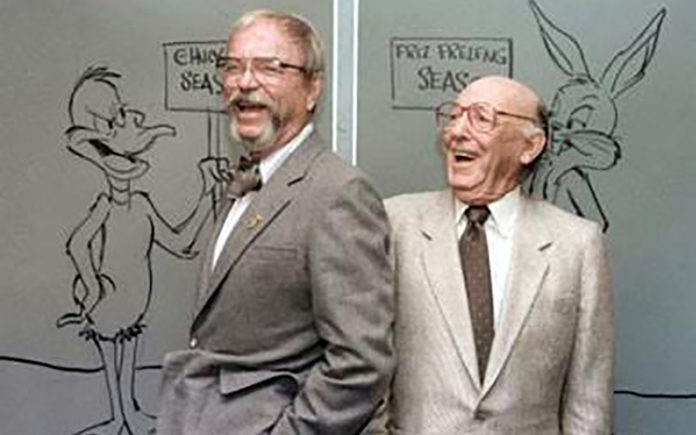 In an age before computer graphics, hand drawing each frame or cell, one by one, created animation. It was a time consuming process that yielded unforgettable characters and films. Opening April 6 through April 15 the Chuck Jones Gallery will host a pop at The Gardens, 73545 El Paseo, (lower level by Saks Fifth Avenue), Palm Desert. The Pop-Up features the work of lauded animation artists, Friz Frelang and Chuck Jones.

The opening event is April 6 from 3 – 5 pm with a talk at 3:30 from the daughters of these legendary artists: Hope Freleng Shaw, Sybil Freleng Bergman, and Linda Jones Clough. These three grew up with the characters that were part of a several generations’ collective memory.

“We are thrilled to host the daughters of both Friz Freleng and Chuck Jones, two legendary animation directors who brought the world such unforgettable Looney Tunes characters as Bugs Bunny, Sylvester & Tweety, Porky Pig, Wile E. Coyote & Roadrunner, Pepe Le Pew, Foghorn Leghorn, not to the mention the Grinch, Tom and Jerry, and Pink Panther! They will share wonderful first hand stories of the golden age of animation and present never before seen original animation art from the families’ personal collection, as well as limited edition prints” said Michael Fiacco, gallery director.

Isadore “Friz” Freleng was a pioneer of animation at Disney where he worked with the Disney brothers when they first established the Disney animation studio. He won four Oscars for the films Tweetie Pie (1947), Speedy Gonzales (1955), Birds Anonymous(1957) and Knighty Knight Bugs (1958). Other Freleng cartoons, such as Sandy Claws (1955), Mexicali Shmoes (1959), Mouse and Garden (1960) and The Pied Piper of Guadalupe (1961) were Oscar nominees.

In addition to his Oscar winning Looney Tunes cartoons, as a principal of The DePatie–Freleng Studio, in 1963 they created create the opening titles for the feature film The Pink Panther.  Freleng produced a short cartoon starring the character, The Pink Phink (1964), which  won the 1965 Academy Award for Best Short Subject (Cartoons)

Freleng hired Chuck in the late 30’s. In addition to colleagues they were lifelong friends.

Jones made over 250 films, won four Academy Awards, and was nominated for six others. Jones has been honored a Museum of Modern Art retrospective, two honorary degrees and countless honors including France’s greatest creative honor—Chevalier de l’Ordre des Arts et des Lettres. His cartoon shorts, What’s Opera, Doc?, Duck Amuck and One Froggy Evening, have been inducted into the National Film Registry next to a select honored group of other great American film masterpieces.

Jones created some of the classic cartoons of all time, including Bully for Bugs, Duck Dodgers in the 24 1/2 Century, Duck Amuck, Rabbit Seasoning, The Scarlet Pumpernickel, Robin Hood Daffy, A Scent of the Matterhorn, and Feed the Kitty.

In 1965 he won an Academy Award for The Dot and The Line. The film is the story of a romance boy meets girl, loses girl, wins girl in the end but the characters are geometric shapes. An uncool nerdy Line competes with an über-cool hipster Squiggle for the affections of a flighty Dot. The underlying theme and lesson are timeless.

Jones also created and directed some of the most popular and critically-acclaimed animated television specials in the history of the medium, including Dr. Seuss’ How the Grinch Stole Christmas, Horton Hears a Who, Rikki-Tikki-Tavi, Mowgli’s Brothers, andThe White Seal.

The Chuck Jones Gallery Pop-Up, featuring the work of Friz Freleng and Chuck Jones, is located at The Gardens, 73545 El Paseo, Palm Desert and  runs through April 15th. For more information visit www.chuckjonesexhibits.com.