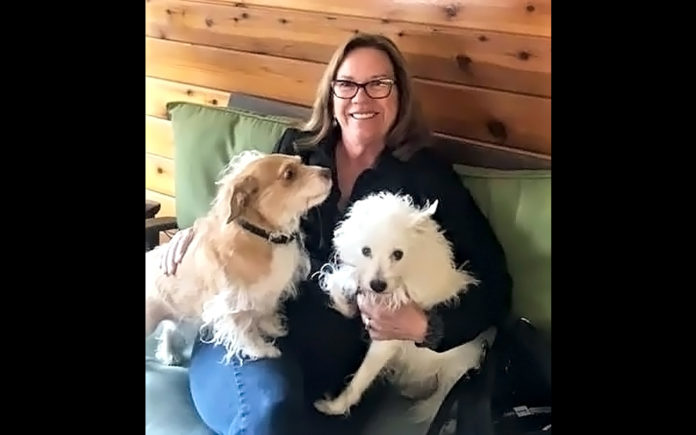 It was a career that spanned 21 years that ended on December 15, 2018, when Christine Madruga hung up her leash for the last time after saving and adopting over 10,000 homeless animals.  She left the Pet Rescue Center shelter in Coachella that day with a heavy heart, but looking forward to taking care of her husband and her own life.  Christine’s beloved mother passed away last year, but not before asking her daughter to slow down and spend time on herself and with family.  Animal rescue can be a consuming task, with animals in need arriving at any time and possible needing emergency medical care, the stream of those in dire need never ends.  Holidays and family occasions are put “on hold” to save another little life.

What inspires the army of weary animal rescuers to keep working to comfort one more frightened abandoned dog?  What inspires someone to drive hundreds of miles to save an animal’s life when it’s about to be euthanized at a shelter?  What inspired Christine Madruga to work tirelessly, sometimes 365 days a year, to build one of the most respected and successful rescue operations in the Coachella Valley?

Growing up with dogs and cats, Christine Madruga understood the magical bond they share with us humans. Dogs comfort us when we are sick, they serve as eyes to the blind, and they bring joy to depressed and troubled souls.  They live joyfully in the moment, they have much to teach us, and greatly enhance our lives.  Christine’s summers were spent riding horses at her aunt’s home in Ventura, and she developed a love for those magnificent creatures as well.

An accidental injury to her cat’s leg led to Christine’s career with animals.  While still a college student, she rushed her cat into Desert View Animal Hospital after it was caught between a fan blade and the radiator.  Her cat was cured, and Christine ended up getting hired as a part time kennel attendant.  She recalls, “I would hurry to feed and clean the animals so I could watch Dr. Jackson doing surgeries.  One day, he signaled to me to help, and I quickly learned how to assist in surgery, take x-rays, do lab work, and answer the phones.”  Christine Madruga’s career as a Vet Assistant began officially in 1976.  When young vet, Dr. Gary Homec, branched out to start his own practice at Valley Animal Clinic in 1978, Christine went with him.  She left the animal business later that year to raise a family, but was called back in 1997.

1998 was the pivotal year when Christine found her life’s purpose.  It was heartbreaking for her to witness sick and injured animals coming into the vet clinic for treatment, only having them return to county animal control afterwards.  The Coachella Valley, then as it is now, is awash in wonderful homeless dogs and cats whose only crime is not having a home.  Christine felt compelled to do something to help these homeless and helpless creatures.

Christine’s rescue was launched with four cages at the back of Valley Animal Clinic.  Eventually, she acquired a spacious property in Coachella, and The Pet Rescue Center was born.  The animals came in from overcrowded Southern California shelters where some would have been euthanized, some were unclaimed, matted and confused strays, others, had owners who were deceased or unable to care for them for a variety of reasons.  Sadly, a few were thrown over the property wall, callously discarded.

Christine knew Mike Russell, president of Loving All Animals, very well and reports, “Mike was my one and only choice to take over The Pet Rescue Center and continue my work.  It feels good to watch your dream live on, and see animals continuing to be rescued and adopted at this location.  I want to thank everyone who made the Pet Rescue Center what it is today, the amazing volunteers, the donors, all the friends, and the adopters.  The shelter is now called Loving All Animals Pet Rescue Center, and I love watching my dream live on through the work of a new group of rescuers.”

This week we honor Christine Madruga, who will always have the heart of a rescuer.  She inspires others to join the army of rescuers who will one day soon make our Coachella Valley a “No Kill” community.  Contact Loving All Animals to find out how you can volunteer at their shelter or be part of their life saving foster team, (760) 834-7000, www.lovingallanimals.org.