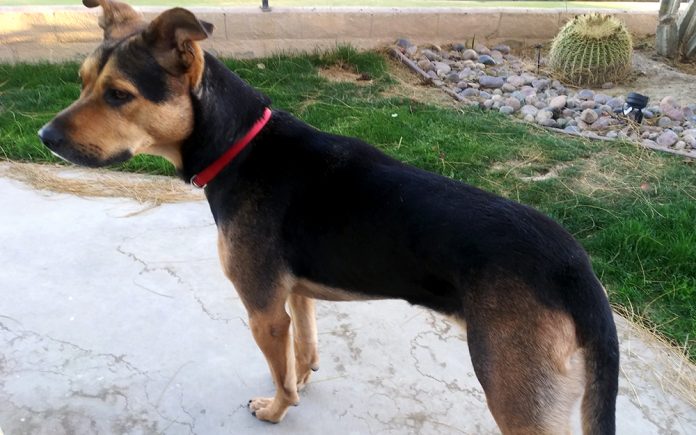 Are you a dog lover with training experience and lots of patience?  Can you handle a 60-lb dog who loves to go for walks?  Are you willing to give a deserving dog a second chance when she might not warm up to you immediately?  Do you have a fenced in yard where this 2-year-old pup can run and play?  If so, please read her story.  You might be the perfect person for a dog who has love in her heart, but she just has to learn to trust you first.

Sometimes the journey to a forever home is a long road.  On December 18, 2019, this column featured the story of this pretty German shepherd mix that had the distinction of being the longest resident at the San Bernardino county shelter at Devore.  She was relinquished there on July 6, 2019.  It was a sad but familiar story when her family said they could not keep the dog due to an upcoming move.  She came into the shelter with no medical or other records, just her name which was Yuma.

How long can a shelter dog wait and still have hope someone will come for her?  How long can a dog mentally survive without becoming stressed by confinement in a shelter kennel?  The Shepherd defied the odds in a shelter where dogs, if not soon adopted, do not make it out alive.  She was evaluated by the shelter staff to be a healthy dog, and she had a happy demeanor upon entry in spite of her predicament.  But the sadness crept in as she watched other dogs go off to happy homes.  The seasons passed from a warm summer to a chilly winter, and the cold Santa Ana winds whipped through the shelter.  The shelter staff noted the Shepherd’s withdrawn demeanor when prospective adopters came to visit.  Folks selected the dogs that greeted then with wagging tails and joyful kisses.

A Coachella Valley couple read the Shepherd’s story and her plight touched their hearts.  They drove out to adopt her.  They already owned one large dog, and were not in the market to get a second one.  After reading her story, they knew the dog would not initially warm up them.  They were not surprised when she stood in the visiting area slightly trembling with her tail between her legs.  They named her Chrissy for the approaching Christmas holiday.  Chrissy appeared scared as she sat wedged against the car door on the ride home to Indio.  Her new human mom sat near her, but the dog did not relax until they arrived home.  Her new mom recalls, “Once we arrived, she made herself right at home.  It was hard to believe she was the same dog we met at the shelter. Chrissy soon behaved as though she’d always lived with us.”

Chrissy loved her new human Mom, but it soon became clear she preferred her new human Dad.  When he leaves the house, she waits longingly by the door for his return.  She sits by his feet during relaxing evenings at home.  And she insists he go with her during back yard trips.  He takes her to the local dog park where she enjoys the company of other canines. Chrissy grew to love her new sister dog Brandy, a lab mix, and the two enjoy playful games.

However, Chrissy’s new parents are seniors, and their current medical problems make it very difficult for them to handle a large young dog.  They are heartbroken at the thought of giving her up, but feel it is in everyone’s best interest.  They want Chrissy to get a home where, given the dog’s life expectancy of 14 or more years, she can happily live out her full life.

The best home for Chrissy would be with young retirees, middle aged, or younger adults who can physically handle a 60-pound dog.  She needs a lot of exercise.  Chrissy would love a home with a nice fenced in back yard where she can play, and afterwards spend time relaxing indoors with her humans.  She would do well in a home with another large dog.  Based on her observed behavior, CHRISSY PREFERS MEN.  A male couple might be the ideal match.

Chrissy is spayed and fully vaccinated.  Call (310) 986-5601 for more information and to schedule a time to meet Chrissy.  Dogs are resilient, and Chrissy will soon bond with a new family with the grateful loving heart of a rescue dog.