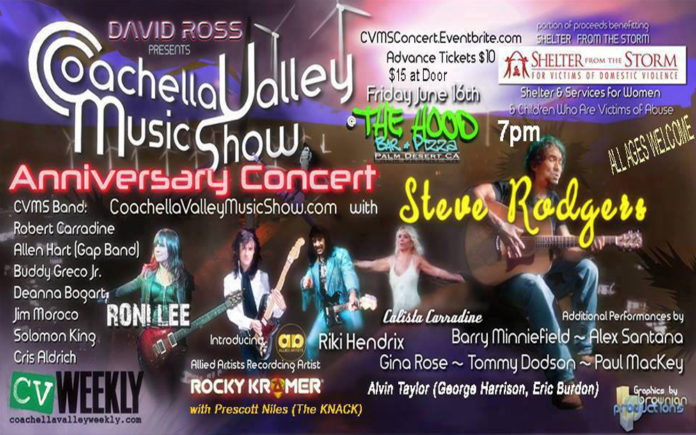 The Coachella Valley Music Show is throwing an Anniversary Concert on Friday June 16th, 2017 at The Hood Bar + Pizza in Palm Desert, CA. David Ross, former Manager and Producer for Junior Walker and Ike Turner back in the 1980’s, has spent his entire life dedicated to the recognition and advancement of talented musical artists. Ross founded and continues to run the widely successful Coachella Valley Music Show, an Online Music TV Show, which pairs famous bands and artists like Jefferson Starship and Terry Reid, with local, up and coming performers. By offering a multi-genre, quality blend of talent, Ross has captured the attention of the Coachella Valley and beyond.

“There is an incredible amount of talent out there and it would be a detriment to our community to not have that talent showcased,” shares Ross. “I am in love with music and I feel very strongly for artists that are talented and that are not getting recognized. My mom was a great singer and a very special person. While I didn’t inherit her vocal talents, I was fortunate to have her guidance in using my own creative talents to support artists behind the scenes as a recording engineer, producer, and manager. This anniversary concert is a celebration of all of the talented guests that we have featured on the show thus far.”

With so much love and support poured into The Coachella Valley Music Show, and the successful turnout of the previous Anniversary Concert, June 16th this year is sure to thrill! Well worth the extremely reasonable ticket price of $10 advance, $15 door to see these legendary performers up close is almost just too good to be true at such an accessible venue. Plus, the concert benefits Shelter from the Storm, which offers shelter and services to women and children who are victims of abuse.

Alvin Taylor: “David Ross is the Bill Graham of the Coachella Valley. All that he seems to care about is getting the music to the people. He seems to be able to do it without letting money or any obstacles get in the way. He has the attitude of, ‘the Show Must go on’. There are so many people that would have gone unnoticed if it wouldn’t have been for David Ross. He plays a very special and important part in the musical entertainment industry especially here in the desert. He keeps it alive with his Coachella Valley Music Show and the various live shows that he brings to town. A musical entertainment industry in the desert without David Ross, how sad, empty and drab it would be. Thank you David Ross for being what the desert has needed for so many years. He truly cares about the music and the entertainers.”

Steve Rodgers: “I’m really looking forward to the concert as the charity is all about helping those who have suffered and still do from domestic abuse; an issue that is very common place, hidden and affects both adults and children for years to come. On a happier note it’s going to be one rockin’ night. So don’t miss it!”

Roni Lee: “I have worked with David Ross on many occasions and he has been a true professional and detailed in all aspects of the projects. So many details when putting on events and David Has always been so great at making the artists feel comfortable letting us focus on the music. David celebrates music and the love of music like no one I have met before. His dedication is awesome. He is a good friend and the music community is super lucky to have him!”

Riki Hendrix: “David Ross is such an awesome producer  and has created some of the most amazing shows. He is very dedicated and gives artists a chance to showcase their talent. It’s an honor to know him as a friend and to work with him on stage and off stage. I would like to thank David for your hard work and for inviting me to perform at your concerts. Keep up the great work.”

Brown Miller: (Graphics and Media Relations) “The Coachella Valley Music Show is a franchise, a brand, a community, and a state of mind. It’s all about bringing the best people together and celebrating their work. It’s also educating the public and aspiring musicians how things are done by the best in the business. Not necessarily the most successful, or famous, or powerful, but the best. David defines quality colleagues by a combination of talent, achievement, uniqueness, accessibility, reliability, loyalty, and ethics. David and his show have provided incredible opportunities for local musicians and creative professionals. By working with David I’ve been able to meet incredible talents and legendary figures.”

Calista Carradine: “The Coachella Valley Music Show anniversary concerts are always a hit with top notch local and traveling talent. I have enjoyed interviewing the musicians and sponsors on this show. It’s been an honor to be their host.”

Tesy Ward: “I am thrilled to be introducing my Artist, Rocky Kramer, to the seasoned music lovers of Palm Desert. We look forward to bringing you our unique brand of Rock and Roll Musical Theatre. Special thanks to our hosts, David Ross Productions and The Hood. We will see you soon, be prepared to ROCK!”

David Ross would like to thank all of the generous Anniversary Concert sponsors including Tracy and Phil of CV Weekly.