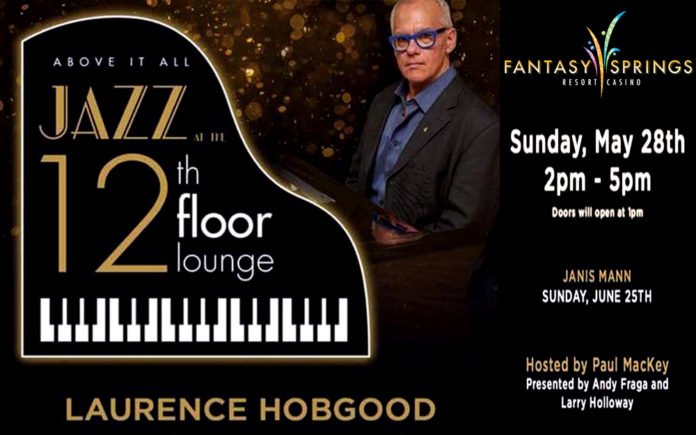 The Coachella Valley will be hosting one of the great Jazz pianists of our time, Grammy award winner Laurence Hobgood, on Sunday, May 28th for Jazz on the 12th Floor Lounge. The event, hosted by Paul MacKey, and presented by Andy Fraga and Larry Holloway (both acclaimed desert based musicians) is the second installment of a series of concerts running every 4th Sunday at Fantasy Springs Resort & Casino in Indio. Though the concert is available to ages twenty one and older only, Jazz on the 12th Floor is absolutely free to the public. Connecting some of Jazz’ heavy hitters to our desert audience in such an intimate and accessible way is truly a breath of fresh air. I had the great fortune to speak with the incredibly personable Laurence Hobgood about his latest projects and collaborations, his most recent and highly acclaimed album Honor Thy Fathers, and what audiences can expect at Jazz on the 12th Floor on May 28th.

Hobgood’s most widely known work has been the almost 20 year stint as musical director, primary accompanist and co-producer for singer Kurt Elling. However, his dynamic career includes work with Larry Coryell, Lee Konitz, John Patitucci, Esperanza Spaulding, Ernie Watts, Marc Johnson, Joe Lovano, Regina Carter, Paul Wertico, Bobby Watson, Clark Terry, Kurt Rosenwinkle, Tammy McCann, and Bob Mintzer to name only a very few, and he has played numerous prestigious venues such as Carnegie Hall and the Lincoln Center, among others. While classically trained beginning at the age of six until delving into Jazz at University of Illinois, Hobgood has always had a knack for playfully reimagining arrangements of classical, iconic and contemporary works. “It’s not the song, it’s how you play the song,” he remarks.

Among Hobgood’s many career accolades is the Deems Taylor Award for outstanding music journalism for his article “the Art of the Trio” of which he is truly an expert. His newest album, Honor Thy Fathers, an accumulation of the artist’s own great works accompanied by bassist John Patitucci and drummer Kendrick Scott, has been heavily praised as his strongest recording yet. The album dedicates music to Hobgood’s own father as well as to his compositional mentor. Most recently Hobgood has formed Tessetera, material which he will tour with his New York based trio in combination with string quartet, working with Ernie Watts to perform an innovative repertoire of iconic pieces such as the Beatles, Ray Charles, and Crosby Stills and Nash. In fact after Tessetera’s debut performance, the Chicago Tribune wrote such a flattering review, Hobgood remarks proudly “it was so good, my wife joked that it was as if I wrote it myself.”

What most excites Hobgood regarding his upcoming show for Jazz on the 12th Floor is “playing with Andy Fraga and Larry Holloway.” He goes on to explain “I have played in various trios for much of my career,” and that he looks forward to this particular combination of musicians at Fantasy Springs Resort & Casino in Indio. Hobgood not only looks forward to interacting with Fraga and Holloway, but with the audience, as he plans to provide insight in between each song, explaining how he came to either write it himself or to reimagine the work of another songwriter (the show will include a bit of both). “People will really have fun with it,” he says, “it’s smart music- intelligent music, but not high-brow… it’s music of the people.”