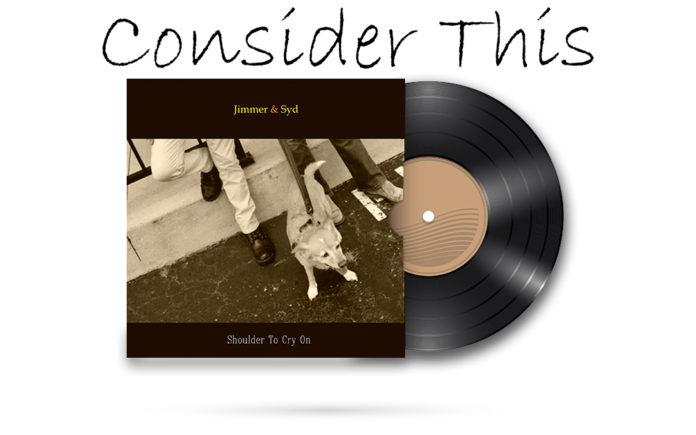 friend (frend) n. 1. A person whom one knows well and is fond of. 2. An ally, supporter and sympathizer.

These days the word “friend” has acquired multiple meanings, sometimes it’s even morphs from a noun to a verb. The term “friending” or “un-friending” entered the lexicon a few years ago and along with the abbreviation LOL, it doesn’t seem to be going away.

True friendship is rare. Youthful friendships are easy, alliances can be made over the simplest of preference, (Hot Wheels over Matchbox, Broncos over Colts, Beatles over Stones). Cultivating friendships later in life can be tougher. Added emotional baggage, unwavering opinions and politics can make it difficult to find common ground. So when you do connect with someone and let them in, it feels all the sweeter. That’s the type of friendship it feels like Jimmer and Syd have.

Artistically, Jimmer Podrasky’s been on a winning streak the last few years. Best known as the front man for the Rave-Ups, Jimmer grew up in Natrona Heights, Pennsylvania. The band went through several incarnations before coalescing in Los Angeles. A four-piece, their sound encompassed Country, Blues and Folk, while harnessing the DIY energy of Punk Rock. Pre-saging the alt.country or Americana movement (musical monikers Jimmer would probably roll his eyes at), they made their bones playing the fertile L.A. club scene.

Local sensations, their debut, Town+Country, was released in 1985 on the tiny Fun Stuff label. The song “Positively Lost Me” went into heavy rotation on KROQ, the city’s premiere New Wave radio station. A year later The Rave-Up’s were featured in a pivotal scene in (Teen Whisperer) John Hughes’ dayglo class drama, “Pretty In Pink.” The film’s star, Molly Ringwald was a big fan and Jimmer had even begun dating Molly’s sister, Beth. Ironically, the two songs they performed in the movie didn’t appear on the soundtrack, released through A&M. Doubly ironic was the fact that a couple of band members still worked day jobs in the mail room at A&M

But the Rave-Up’s persevered, signing with the behemoth label, Epic, home to Michael Jackson and Stevie Ray Vaughan. Despite the fact that they released two excellent records, Book Of Your Regrets in 1987 and Chance (named for Jimmer and Beth’s son), in 1990, the Rave-Up’s rootsy sound positively got lost in the shuffle.

The Rave-Up’s quietly called it quits and Jimmer continued with a couple of other projects that never came to fruition. A mostly single dad, he took a sabbatical from music and concentrated on raising his son. Fast forward more than 20 years later and his return was bolstered by two advocates, Robbie Rist (best known as Cousin Oliver from the “Brady Bunch” and a fine musician in his own right), and Jimmer’s hometown pal Ed Sikov, (a Film scholar and author).

2014 saw the release of his first solo effort, The Would-Be Plans, a concise set of songs that were funny, heartfelt and heartbreaking. Rapturous reviews hailed the album as a welcome return of a protean talent. That momentum continued in 2016 when Omnivore Records re-issued an expanded edition of Town+Country. To celebrate, The Rave-Ups played a few select live dates around Los Angeles. Soon after Jimmer returned to the studio and finished his sophomore solo album, God Like The Sun which arrived in early 2017. Doubling down on the winning formula of his first album, God… was another sharp collection of smart, sad, sunny and funny stories, all wrapped in indelible melodies.

Syd Straw is something of a rarity in the music business, a sui generis talent who definitely marches to the beat of her own drummer. A Hollywood kid, her dad was actor Jack Straw, best known for his role in the Doris Day movie “The Pajama Game.” Once she came of age, Syd moved to New York, hoping for a career making music.

She first made a name for herself at Catch A Rising Star. The infamous venue opened in 1972 and launched the careers of everyone from Billy Crystal and Joy Behar to Eddie Murphy and Louis C.K. Pretty soon Syd was singing back-up for Pat Benatar, who had also gotten her start at the club. This led to a stint with The Golden Palominos. The No Wave/New Wave super group first emerged in the early ‘80s and included downtown musicians like Anton Fier, Bill Laswell and Nicky Skopelitis. Superstar musicians who lent their talents to the band included Michael Stipe (R.E.M.), Jack Bruce (Cream), John Lydon (Sex Pistols and PiL) and Richard Thompson. Lesser known lights (at the time), who also contributed were Matthew Sweet, Don Dixon, Peter Holsapple of the db’s and T-Bone Burnett. Syd appeared on their second and third albums and her vocals stood out from the pack. Once she struck out on her own, she started concentrating on writing her own songs.

Entitled “Surprise,” it was released in 1989, it didn’t exactly set the charts on fire, but the music industry took notice. Along with Squeeze and the Cars’ Elliott Easton, Syd appeared on the inaugural episode of MTV’s “Unplugged” program, around the same time she “Syd-ified” a version of Doris Day’s signature song, “Que Sera Sera,” which played over the credits of the mordant Wynonna Ryder Black Comedy, “Heathers.”

In the ‘90s she began a discriminating acting career, appearing as Laurel, in the first “Tales Of The City” miniseries and more lastingly as Miss Fingerwood, the Algebra teacher in the Nickelodeon series, “The Adventures Of Pete & Pete.” By 1995 she had returned to the recording studio, in Springfield, Missouri of all places. Enlisting the help of a Springfield band called the Skeletons. The ensuing album, War And Peace was more stripped-down and assured than her first effort. It featured instant classics like “Love And The Lack Of It,” “Time Has Done This” and “CBGB’s.”

The world would have to wait another 12 years for new Syd Straw music, her self-produced “Pink Velour” album arrived in 2008 via her own Earnester label. In the meantime, she could be found adding her dulcet tones to recordings by Dave Alvin, Rickie Lee Jones, Leo Kottke, Wilco, Los Lobos and Cindy Lee Berryhill. For the last 20 years she made Vermont her home but she spends each Spring in Los Angeles, with her faithful manager and canine companion, Carole Burnette in tow.

Sitting in with friends, playing gigs, adding her rich harmonies upon request, and participating in the annual Wild Honey benefit show, keeps Syd and Carole pretty busy each year. A couple of years ago, Jimmer asked her to duet on his song “You Can Count On Me.” The pair had originally met way back in the ‘80s, but had never collaborated musically. The tune was a highlight of the God… record, and it got them thinking… once they cleared the idea with Carole (and the Foxyco. Management team), Jimmer combed through his surplus of original songs and the result is the six song EP, Shoulder To Cry On.

The record opens with “The Girl Next Door.” Hazy harmonica runs lattice over jangly acoustic guitar and sawing violin. Jimmer and Syd’s vocals perfectly intertwine on this politically-charged lament. Lyrics emphasize the skewed values that evolved following 9/11 and the run-up to the most recent war in Iraq; “We argue more about a tit exposed than a war where little’s told, we don’t worry about dying but we’re afraid of looking old/A generation didn’t care and something sure got lost, and they made a generation that won’t be better off.” Later in the song they offer this vivid (ne’ apocryphal) scenario; “Moses and Mohammad picked up Jesus in a cab, and they all went to a party at the house of Abraham/And the Devil crashed the party and he looked them in the eye and said ‘we all own a piece of this great big pie.’” Yep, even Beelzebub knows we’re all complicit in the current culture war.

Conventional wisdom has it that there are five stages of grief: Anger, Denial, Bargaining, Depression and Acceptance. Jimmer and Syd skip the first two and tackle the last three on a trio of tracks that burrow deep into the dissolution of a relationship.

“So Long Blue” offers a crash-course in the art of emotional bookkeeping. Rumbling bass lines connect with smoky harmonica, rippling banjo, chiming acoustic riffs, baritone electric guitar, Gypsy Violin and a stutter-step rhythm. Dashed expectations and broken promises crater an on again/off again entanglement. A combo-platter of emotions are etched in a few succinct lines; “Every time you looked back at me with that kind of disappointed glee, it set me free.”

“More Than Mine” is elegantly rueful. It opens with a poignant confession; “I was thinkin’ about your life, funny how I think about your life more than mine.” The instrumentation is spare and bare-bones, cantilevered acoustic riffs bridge bedrock bass lines, swirly electric guitar and a slip-stitch beat. Here, Syd’s supple harmony shades Jimmer’s rough-hewn rasp as he parses the politics of the romantic postmortem.

There’s a hint of anger on the title track. Resonator color outside the lines of the torchy melody, as layers of acoustic guitar and violin wash over a kick-drum beat. Old lovers poised on the threshold of friendship lay down the ground rules; “I don’t wanna be the pan you fry on, when someone new has come to push your shove…I don’t want to be the roof you rely on, when the rain comes pouring down from up above/Don’t want to be the shoulder you cry on, ‘cause I’ve forgotten all I ever learned of love.”

The biggest surprise here is “Big Wide River.” Modal and melancholy, the song evokes the expansive soundscapes of “Wichita Lineman” and other-worldly Psychedelia of “Don’t Come Around Here No More.” Anchored by wily sitar notes and a propulsive dumbek beat, the lyrics chronicle an erratic courtship that weathers some ups and downs; “Like a big wide river our love rages and then it’s calm/But fight after night and night after fight it keeps on rolling on.” Despite the romantic Sturm und Drang, the song is suffused in sweetness, thanks to Jimmer and Syd’s heady harmonic brew.

The album closes with “Break Like The Sun,” a scratchy stylus sound folds into a back-porch ramble accented by acoustic guitar, roiling bass, boisterous banjo and prickly violin. The lyrics issue an open invitation; “The kitchen door is open to you, all you have to do is move your hopes and dreams and plans and schemes and all your stuff and everything.” A sunny sing-a-long, there’s a joie de vivre here that is infectious and insistent and quite impossible to resist.

This kind of chemistry can’t be faked. There’s a symbiotic convergence that occurs when Jimmer and Syd blend their voices together. It seems so natural, nuanced and nonpareil; it’s hard to believe they haven’t been honing this sound for decades. Hopefully the Shoulder To Cry On is just a taste of things to come.