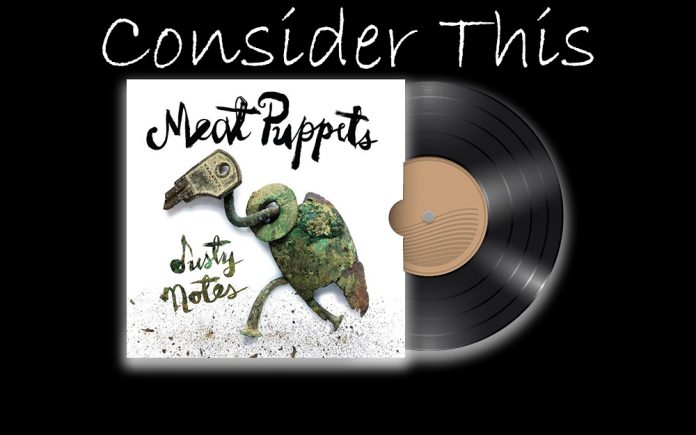 In the pantheon of Punk Rock, the Meat Puppets have always been something of an outlier. Although they have been around nearly 40 years, they never received the ink or accolades that were afforded contemporaries like Black Flag or Sonic Youth. Most American Punk bands took their cues from British anarchists like the Sex Pistols and the Damned. The Meat Puppets’ influences were more disparate.

Curt (guitar/vocals) and Cris Kirkwood (bass/vocals) grew up in Phoenix, Arizona, coming of age in the late ‘70s. They made their musical bones playing in a series of high school cover bands before forming the Meat Puppets with drummer Derrick Bostrum in 1980. Equally inspired ‘70s AOR, Derrick’s collection of Punk ‘45s and their desolate surroundings, they hammered out a distinctive sound. There wasn’t much room for nuance on their self-released debut EP, loud, fast and primitive, it banged out five songs in under 10 minutes. It also managed to capture the attention of Greg Ginn.

Not only did Greg Ginn form the seminal, Hardcore Punk band, Black Flag, he also founded SST Records. During the ‘80s, SST became one of the most influential independent labels in the country. Along with Minutemen and Saccharine Trust, the Meat Puppets were one of the first bands to sign with the label. SST later became home to Husker Du, Bad Brains, Dinosaur, Jr. Sonic Youth, Divine Horsemen, Screaming Trees and Soundgarden.

Once they signed with SST, the Meat Puppets’ eponymous long-player arrived in 1982. Sure, it was thrashy and chaotic, but there was a hint of melodicism lurking beneath the musical ataxia. Once they were on tour, the three-piece crisscrossed America playing dive bars and Punk clubs. It was during this time that they began to appreciate homegrown musicians like George Jones and Marty Robbins. By their sophomore effort, Meat Puppets II, their sound had evolved into a heady brew of Punk, Country and Psychedelia. Those elements further coalesced by their third album, 1985’s Up On The Sun. Equal parts ragged and right, ….Sun garnered unanimous critical praise, as well as attention from mainstream press. Even MTV briefly played their videos.

All told, the Pups released seven albums for SST, including Out My Way, Mirage, Huevos and Monsters. Each album drifted further from their thrashy origins, veering away from the Dead Kennedys and toward the Grateful Dead. Their songs remained economical, no 30-minute jams for these desert rats, but they zeroed in on a more expansive and inclusive style.

After erstwhile label-mates like Dinosaur, Jr., Sonic Youth and Soundgarden found success on major labels, the Meat Puppets also took the plunge. Signed to London Records, they released Forbidden Places to little fanfare in early 1991, but that would soon change. The Grunge era was dawning and bands who had been weaned on a steady musical diet of Punk and Metal were gaining traction commercially. Nirvana was the first band to break through, their second album, Nevermind was a smash. Front man Kurt Cobain consistently name-checked influences like the Pixies and the Meat Puppets. By 1993, Nirvana invited the guys to be the opening act for their In Utero tour.

Toward the end of that tour, Nirvana agreed to perform an acoustic set that was filmed for the MTV series, “Unplugged.” The trio, augmented by former Germs guitarist Pat Smear, seemed to reluctantly embrace the corporate music machine they quite publicly disavowed. Tellingly, Kurt Cobain seemed pained and uncomfortable for most of the performance, only perking up when he played songs by other artists that he felt passionate about. David Bowie, Leadbelly and the Vaselines were accorded one track apiece. Then Kurt invited Curt and Cris Kirkwood to join them onstage and perform “Lake Of Fire,’ “Oh Me” and “Plateau,” classic cuts originally found on Meat Puppets II. Suddenly, MTV and a new generation were paying attention to the Meat Puppets.

In early 1994, they released their ninth album, Too High To Die and the single “Backwater,” climbed to #2 on the Billboard Mainstream Rock charts. 12 years after their debut, they had their first gold record. But in the wake Kurt Cobain’s suicide, the Pups’ long-overdue success felt like a pyrrhic victory. They quickly followed up with 1995’s No Joke, like Too High it was produced by Paul Leary of the Butthole Surfers. Sadly, their newfound success allowed Cris to retreat more deeply into drug addiction. Crack cocaine and heroin became his twin avatars. The band went on indefinite hiatus in 1996.

As his brother spiraled downward, Curt moved on to other musical projects. Following his wife’s overdose death in 2003, Cris attacked a guard at the Phoenix post office, shot twice, he was incarcerated in an Arizona State prison. During the three years Cris was away, Curt resurrected the Meat Puppets employing different drummers and bass players. When Cris was finally free and sober, the Kirkwoods reunited and recruited drummer Shandon Sahm, (son of Sir Douglas Quintet/Texas Tornados legend Doug Sahm). The Meat Puppets were back.

Since then, the band’s output has been prodigious. Between 2007 and 2013 Rise To Your Knees, Sewn Together, Lollipop and Rat Farm arrived at two-year intervals. Not long after the Rat Farm tour wrapped up, Shandon Sahm announced he was moving to Europe. The time felt right to reunite with Derrick Bostrom. Curt was already writing the new record, just in time for Derrick to return to the fold. Their 15th studio effort, Dusty Notes is the fruit of that labor.

The first two tracks gently kick the record into gear. “Warranty” connects gentle acoustic notes to gnarled electric riff-age, wily bass lines and a loping rhythm. Admonishing lyrics warn of diminished expectations; “What you see is what I am, take a look at the invisible man/Satisfaction cannot be guaranteed, when you don’t know just what you see.” Shadowy keys wash over the instrumental break and as guitars spark and pinwheel.

If Pee Wee Herman ever resurrected his classic Saturday morning TV show, “Nine Pins” could easily be the theme song.  Blending banjo-riffic guitars with roller-rink keys and a ho-de-oh beat, the cluttered instrumentation belies lyrics that long for wide open spaces; “…..where I can walk between the trees.” Concentric guitar licks spiral out into space on the break. A sunny little number, it truly sneaks up on you.

The Meat Puppets’ relatively low profile has always allowed them to follow their muse. Whether their inspiration is thrash, the Clash or Johnny Cash, the authenticity has always shone through. That tradition continues here, from the Honky Tonk lament of “On,” the Psychedelic Conquistador crunch of “Nightcap” or their faithful cover of Don Gibson’s “Sea Of Heartbreak.”

Still, the best tracks here manage to consistently stake out new musical territories. If the Partridge Family ever collaborated with Boston, it might sound something like “Unfrozen Memory.” The arrangement toggles between ‘60s Baroque and ‘70s AOR. Powered by rippling harpsichord, spooky guitar, chilly bass lines and a chugging beat, the instrumentation swirls building to a soaring twin guitar crescendo.

Initially graceful and pastoral, “The Great Awakening” feathers lithe acoustic arpeggios over sparkly piano notes, lyrics are suitably bucolic; “Emerald stones and candy, blossoming in the breeze, jasmine butterflies floating in the trees, prying at the lock to break into wonderland, to break into wonderland.” On the break, time signatures shift, salting urgent keys and a chunky backbeat into the mix. It’s suddenly slippery, trippy and tribal.

Finally, both “Dusty Notes” and “Vampyr’s Winged Fantasy” offer a smorgasbord of sounds. The former is a ramshackle hoe-down that matches whipsaw guitars, wobbly bass and a handclap rhythm with Mariachi-style synth-horns. Lyrics lean hard on cosmic connections; “It’s blowing in my face, I feel it in my hair, and I don’t know where it’s from, I don’t know who put it there, but I think it might be real and it’s giving me my share.” There’s an unexpectedly courtly Spanish-flavored guitar solo on the break, giving the song some South Of The Border charm.

The latter is a potent combo-platter. It opens deceptively with willowy, almost Jazz-inflected electric piano notes, before unleashing a fusillade of caterwauling guitars over tensile bass lines and a jackhammering beat. An agile affirmation of their Punk Rock cred, it careens out of the speakers at warp speed, shadowed by sepulchral vocals that speak of “Bat leather banquet. Drink your human wine, calculate your membranes, reverberate in time.” Suddenly, the whole enterprise downshifts slightly on the bridge, adding descending piano chords. And so it goes, accelerating wildly and then pumping the brakes, lather, rinse, repeat. Guitars are suitably cyclonic on the break layering in percolating percussion, and finally drifting off into the ether.

The album closes with “Outflow,” a meandering cowpoke groover that is a sweet encomium to nature. Dusty Notes was produced by the band and Jeremy Parker, the Pups’ signature sound is strengthened by the addition of Curt’s son Elmo on guitars and vocals and Ron Stabinsky on keys.

As the trio notes on the title track; “Music flows through an open door, can’t keep it closed, it’s liking to swing/Dusty notes drift across the floor, can’t keep it clean, it’s a magical thing.” The Meat Puppets’ originally harnessed that magic long ago and with each record since, they’ve managed to balance audacity with consistency. Now with the prodigal return of Derrick Bostrum, one must paraphrase those Soul/Pop poets, Peaches & Herb, rejoicing; “The Meat Puppets have reunited and it feels so good.”