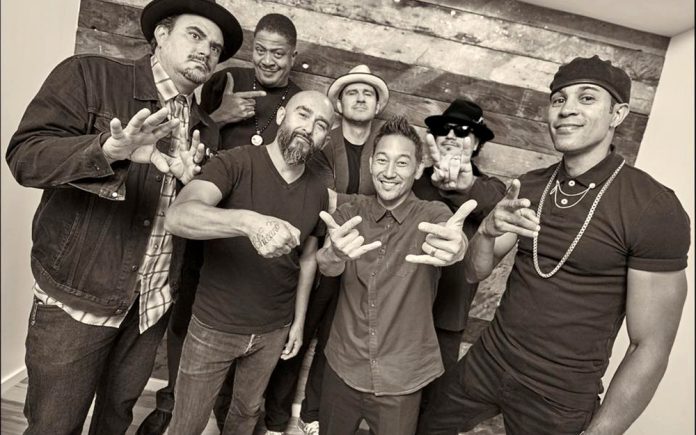 Performing their own blend of Latin, Funk, Hip-Hop, Reggae and everything in between since 1995, Ozomatli’s innovative and creative approach to music has provided them a journey of 25 years. Originating from Los Angeles, the band represents the city’s eclectic culture that appeals to the local community and beyond. Ozomatli has formulated one of the most exciting, participatory and full-throttle live shows touring today. OZO, as they are affectionately referred to by fans, includes Wil-Dog Abers on bass, background vocals, Ulises Bella on saxophone, clarinet, Requinto Jarocho, keyboard, melodica, background vocals, Raúl “El Bully” Pacheco on guitar, tres, Jarana, lead vocals, Justin “El Niño Porée on percussion, Rap vocals, Asdru Sierra on trumpet, keyboard, lead vocals and Jiro Yamaguchi on drums, tabla, percussion and background vocals.

Ozomatli makes their yearly stop at the Date Shed in Indio, California on Friday, January 17, 2020 with Los Stellarians and Ocho Ojos. Tickets are $25 and can be pre-purchased at eventbrite.com or $30 at the door. The show is 18 and over and doors open at 8 p.m.

Supporting them at this show are Classic Soul, Funk band Los Stellarians and Coachella Valley Psychadelic Cumbia reps Ocho Ojos.  Los Stellarians features SA Martinez from 311 on vocals and Ryan Siegel of Exes Of Evil on guitar, bass, keys, percussion and vocals. Their most recent album, Rucaz N’ Rolaz, is available everywhere. Their first album, Cholo Soul, consists of covers of 70’s soul songs curated by SA, who’s extensive record collection inspired the project. Included on that album is a performance by our beloved Steve Madaio on trumpet. Ocho Ojos recently released their newest Cumbia composition Cali and the song is available on all major music platforms.

Coachella Valley Weekly spoke with Ozomatli guitarist, vocalist and songwriter Pacheco via phone as they prep for their short tour.

CVW: WOW! 25years! You have this short run of shows on the West Coast, Utah and Colorado. Can you give us an update on OZO?

Pacheco: “Everything is cool, we’re trudging along, having fun writing new songs, recording new songs, ready to release some new music by summer. We keep showing up, can’t get rid of each other.”

CVW: And welcome back to your home away from home. You’ve been performing and visiting the Coachella Valley for years now.

Pacheco: “It’s always a good time in the Coachella Valley. We try to stay connected. It’s cool to see the people who come to our shows out there, they’ve kind of grown up with us so that’s been cool. I just hook up with the locals to find out where I’ll eat and to have fun, they give me a list of places.”

CVW: The OZO sound and experience transcends music and live entertainment. Your music and shows inspire hope where there is none and music that is discerning. How have you been able to maintain the standard?

Pacheco: “With a particular group of guys, what’s important is the individuals that make up the whole. The fact that there’s still the main core, the original dudes, I think that’s important. We don’t think about it, but when we do step back, after 25 years we’re still playing, making a living and helping people enjoy themselves.”

CVW: Tell us about your 25 years of songwriting in OZO.

Pacheco: “In regard to songwriting, I’ve always been pretty involved in it. That’s something I do period, I write songs for other people. It’s always different. For me, to work and sculpt something and other people are excited, creating something that’s really important to me when I’m writing songs for the band, it’s more like we’re creating something from nothing, it’s inspiring, if everyone is happy, it’s worth working on.”

CVW: You’ve shared that you’re in the process of developing new music. Has anything changed over the years in regard to your songwriting process?

Pacheco: “We’re doing the same thing we’ve always done. It’s probably different for us because that’s probably the way things are within the group. I’m interested in creating music with ideas we feel right away, so if something comes up I want to be able to take that and roll it into the music immediately.”

CVW: You played guitar and percussion on Santana’s multi-Grammy winning album Supernatural (1999). You also sing lead and backgrounds while playing guitar. To me, you’re underrated as a guitarist.

Pacheco: “I was 14 when I first played guitar. I’m not like a guitarist’s guitarist. When the rhythm I’m singing is different than the rhythm in my hands, it makes it difficult, so my brain has to get used to separating them.”

CVW: OZOKIDZ is a fantastic opportunity to introduce music to children. What has been your favorite element?

Pacheco: “The kids are hilarious and it’s fun when they get into it, it’s magical. They’re kids! I think for us, even though we’re adults, we’ve carried that youthful spirit and we remember what it was like, we remember being young, attending our first concert or hearing someone play music for the first time. We understand that’s actually happening with some of these kids, they’re little. They may not have been so close to an instrument before. For us, it’s important to introduce that and have fun with it. We’ve done a bunch of stuff on PBS.”

CVW: We recently lost a great musician and humanitarian in Neil Peart. What do you think it was about him that made him extraordinary?

Pacheco: “There’s a ton of drummers out there, but he was able to create a recognizable and personable style all his own. I think that’s one of the hardest things a musician can do. Often times it’s about other things you think it would be about, technicality, etc., but really it’s about uniqueness. You can’t compare other musicians who are distinct, Neil Peart is an extravagant and technical rock player, those crazy rolls, you know it’s him, that’s pretty remarkable for any musician in any style of music; to be recognizable. It’s understandable that so many people have given him props. Those songs like Tom Sawyer, those crazy drum sections, everyone knows them, when they hear that song, that’s what it’s about, that section, the crazy drum breaks, that’s pretty cool that a human being is able to make that impression with a set of drums.”

See OZOMATLI & OZOKIDZ near you: