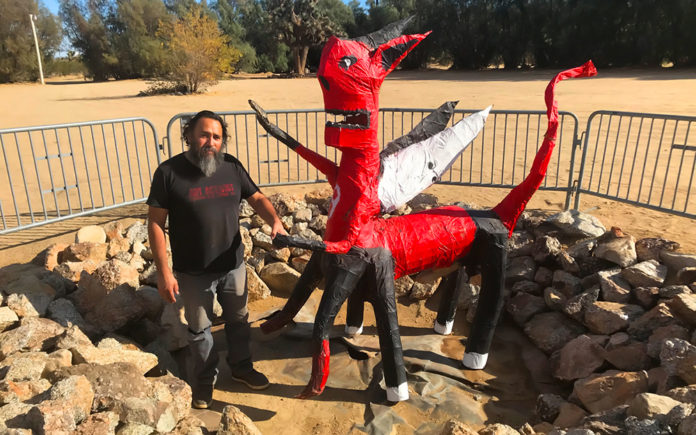 Quema Del Diablo is a Guatemalan tradition.  It is traditionally held on December 7.  The festival is meant to be a refreshing of sorts.  Quema Del Diablo – which translates to “burning of the devil”- has nothing to do with Satanism.  In fact, it’s quite the opposite.  The people of Guatemala use this festival to burn away the bad of the previous year, and make way for the freshness of the new year. 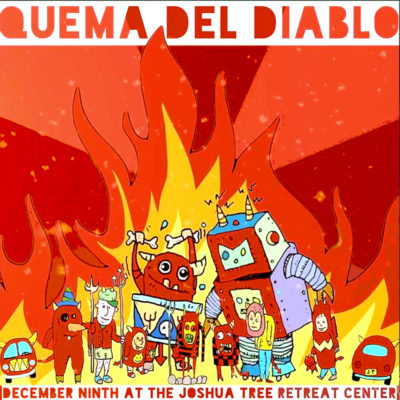 This year, Rolo Castillo and a group of other artists and like-minded individuals, including famous punk rock artist and screen printer “Bad” Otis Link, Bill Green, and Michel Cicero are bringing this tradition to Joshua Tree.  The festival will be held at Joshua Tree Retreat Center and all proceeds will benefit the rebuilding of the Joshua Tree Retreat Center Farm.  This Quema Del Diablo will feature many local and internationally known artists and musicians including Otis Link, Dave Catching doing a DJ set, Jessika Von Rabbit with her full band (a newer experience not to be missed), and more.

For those of you who have never been to a burn, it is one of the most refreshing experiences one can have in their life.  The energy of the people around you can over take you.  It is extremely satisfying to be around a ton of great art and music, then participate in a ritual as powerful as a burn.  You can literally watch the stress of life flow out of the participants.  Joshua Tree’s version of Quema Del Diablo will be held on Saturday, December 9 and tickets are still available.  This is limited to 1000 guests, so act fast.

We had the honor to visit the sight ahead of time and chat with Otis and Rolo about their past and Quema Del Diablo.

Coachella Valley Weekly:  Can you tell me a bit about Quema Del Diablo?

Rolo Castillo: “This is the fifth Quema Del Diablo I’ve done.  The first one I did was in ’97.  I worked in a print shop, Little Frog Town, close to Highland Park.  It’s a gallery now.  A guy told me about this festival in Guatemala.  People are burning trash, furniture, everything.  It’s a cleansing.  This tradition has been around for 130 years.  The way I started using it is, December not often the greatest time in the world.  It’s stressful.  The holidays, the traveling… it’s a bummer.  I felt what a great way to do the holidays.  It’s not a ‘holly, jolly, Christmas.’  The second year, people started really getting into it.  They were burning away their bad juju.  Now it’s equally divided; some come for the art, some the music, and some the burn.  This year has been pretty hard on the planet.  I felt it was a good time to do it again.  I had hard times too.  I went through rectal cancer.  I’ve been through hell and back.  I’m ready to let this go.  We also wanted to bring a new tradition to the desert.  We want this to be a new annual holiday tradition.  We wanted this to be a $150 event for $20.  Even $20 is a lot during the holidays, but this benefits the community.”

CVW:  We’re standing here in what you’ve dubbed “Frontier Land.”  There is a whole lot of construction happening.

Rolo: “Well, the Retreat Center has been needing a lot of repairs.  We saw these structures which needed completion.  We’re turning one into a gallery, but at the end of the event, it can be used for other things.  We’re trying to make this unused 8 acres usable for events and retreats.  All of the musicians have donated their time.  All of the money is going to rebuilding the Retreat Center.  I’m not even getting paid.  All of the money raised so far has gone to materials, generators, and permits.  We’re trying to get money together for hotel rooms for the bands now.  It’s going to be cold.”

CVW:  I’m thinking of this as an ushering in of the new.

Rolo: “Exactly.  There will be people here burning love letters and photos.  We used to have people burn art.  There’s always that piece that is never done.  That one you can sell and can’t throw away.  It’s still just bugging you.  This was a great cleanse.  This started as personal, but I wanted this to be communal.  I think there are people who really need this.  I’ve seen it.  Come for the art and music, but the burn is what it’s really about.  People are going to come for the music and art and not realize that they needed the burn.  The energy is going to be heavy.  People are going to be crying, and some are going to be happy.  It will bring people from every walk of life.  It’ll bring together a lot of new people.  A lot of friendships will be made.  Some people are scared of the name, but in reality, the devil was a fallen angel.  He lives in fire, but he doesn’t like it.  It’s not Satanic, it’s getting rid of evil.”

CVW:  You’re a part of an art collective.  They will be set up at Quema Del Diablo.  Who is involved?

Bad Otis Link:  “It’s Still Music By Art.  The bones of that are myself, Greg Jacobs, and Scott Parker.  We usually bring in other guests too.  Scott runs Foo Fighters studio and is a painter.  Greg is a band photographer.  We’ll have a booth set up.  My son will be there, some girls from Coachella doing body painting, and Iris Hall of Deep Thought Studio will have some pieces there too.  She may have one in the gallery too.  I think I’ll probably have one in the gallery.  Most of the art here, I want to make affordable.  I’m making smaller pieces available for around $50.”

CVW:  I’ve seen some of the sculptures.  They scream Bad Otis Link.

Otis:  “It’s come naturally to me.  I used to do puppetry.  I might get one or two of those done for this too.  They go for a bit more.  This is Christmas time.  I’ll have socks, ornaments, sculptures, and drawings.”

CVW: How did you start in the art and music scene?

Otis: “I got involved in printing and providing bands with merchandise because it was the closest thing I could do to art.  I learned it from these hippies in the 70s.  It was the brother of the harmonica player in The Nitty Gritty Dirt Band, Terry Faddon.  I met him because he was digging in the dumpster at a screen printing shop I worked at making signs.  He wasn’t poor, so I don’t know what he was looking for;   maybe just because it was a print shop.  We started talking and he invited me to his print shop that just opened.  They just moved here from Aspen.  My first gig working with him was their shits.  Then we did Kenny Loggins’ first tour and Earth, Wind, and Fire.  We did Little Feat and Fleetwood Mack.  I caught the tail end of that stuff.  It was all cocaine and crazy shit.  They all thought they were satin jacket rock stars.  The place was right next to The CooCoos Nest in Costa Mesa.  I’d walk past there on the way home and realized nobody was doing any designs for punk rock.  So, I started making shit for my favorite bands, and the bands loved them and asked me to do more for them.  It just snowballed.  In 10 years, I had bands from all over the world hitting us up.  We were dependable and doing it the correct way.  We did little bands, and the bands kept getting bigger and bigger.”

CVW:  You were involved with Goldenvoice in the early days?

Otis: “Gary Tovar and I are best of friends.  I’ve been working with them since they first started in 1981.  I met him in Santa Barbara with Bad Brains.  He was promoting shows up there.  He hadn’t come to L.A. yet.  We hit it off even though he didn’t seem like a punk rocker to me.  He wanted to come to L.A.  He rented space in my printing shop.  We brought a Xerox machine in and started making flyers for shows he was booking in L.A.  We had people from all over the world come in.  That’s when Goldenvoice became Goldenvoice.  We did a t-shirt for every show.  Gary really supported that.  Some of those shirts were offsetting on the back of other shirts because they never dried.  They’re collectable now! We did Bad Religion, Circle Jerks, and Red Hot Chili Peppers.  It was a shit load of bands.”