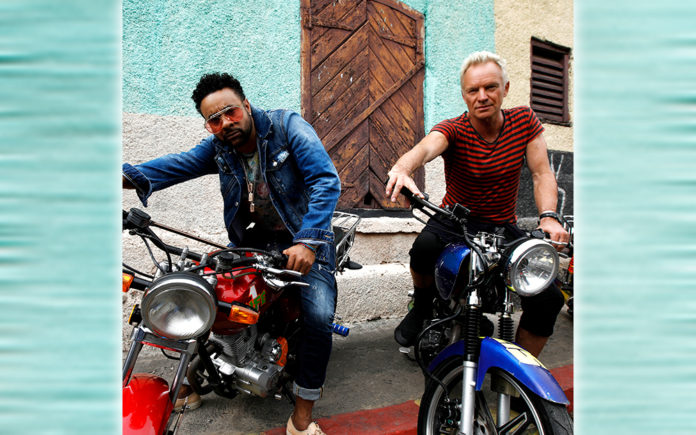 Sting & Shaggy will bring their dynamic and vibrant joint live show to Agua Caliente Casino Resort Spa’s The Show on October 12. Performing in this intimate venue, the iconic artists will combine their bands to play songs from their recently-released, island-flavored collaborative album, 44/876 (A&M/Interscope Records), and to collaborate on each other’s most celebrated hits such as “Every Breath You Take,” “Englishman In New York,” “Message In A Bottle,” “It Wasn’t Me,” “Mr. Boombastic” and “Angel.”

Sting and Shaggy initially joined forces to record a new song, “Don’t Make Me Wait” (which debuted at No. 1 on Billboard’s digital reggae singles chart), as a tribute to the Caribbean sounds that influenced them both and ended up recording an entire album full of joyful and uplifting, melodic music. With its title referencing their respective telephone country codes (44 for the UK, Sting’s birthplace, and 876 for Jamaica, Shaggy’s homeland), 44/876 honors the duo’s deep-rooted love for Jamaica: Shaggy’s birthplace, and where Sting penned such classics as “Every Breath You Take.”

Along with continuing each artist’s exploration of reggae and its transcendent rhythms, songs like “Don’t Make Me Wait,” “Morning is Coming,” and “Gotta Get Back My Baby” reveal Sting and Shaggy’s shared passion for creating timeless music that defies expectation.

On May 25‪, “44/876: The Remixes” will be released on A&M/Interscope Records, featuring an albums’ worth of remixes of songs from their album by a diverse range of artists including Chris Baio of Vampire Weekend, the Brazilian duo Tropkillaz, Cherry Cherry Boom Boom (Madonna, Lady Gaga) and Grammy-award winning producer Dave Audé, among others (track listing included below).

Sting and Shaggy’s October 12 performance will mark Sting’s second appearance at The Show at Agua Caliente Casino Resort Spa. With all seats 125 feet or less from the stage, the extraordinary design of The Show creates an intimate space for experiencing legendary performances. Tickets range in price from $130 to $180, available online at HotWaterCasino.com or by calling (800) 585-3737 starting on May 24 at 10 a.m. Every online ticket purchase includes one digital copy of Sting and Shaggy’s album, “44/876.”