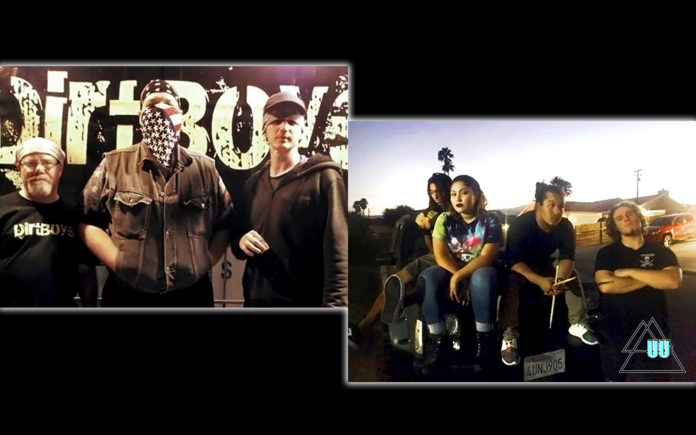 With only a few days until Stickyfest, Coachella Valley Weekly has effectually covered all of the artists performing. Last but not least are UU and Dirt Boys, who will be rocking on November 10, 2018 at The Palms located in Twentynine Palms, California with their colleagues Throw the Goat, Sticky Doll, Sleazy Cortez, Mega Sun, Instigator, Satanic Johnny, The Wastedeads, Drop Mob, KARR and ORMUS. The all-ages event is outdoors and offers free camping. Tickets can be purchased for $12 on-line or $15 at the door. Members of the military and children under 16 with parent receive free admission with identification. You can purchase tickets now at stickyfest.com. Coachella Valley Weekly spoke with UU and Dirt Boys on separate occasions as the zero hour for Stickyfest approaches.

CVW: How would you describe the UU sound and what’s your volume level?

UU: “UU’s sound could be considered hard to heavy with a bit of some softy stuff in between. We like to be loud but know how to rock some soft stuff.”

CVW: What are your names and instruments in the band. Also, tell me about any other special talents you possess?

UU: “Mia Matos on vocals, Chance Day-Spicer on lead guitar and backup vocals, Kai Hatrak on bass and Chris Morgan on the drums. Mia is a dancer and extremely talented vocalist. Chance is just a big guy that enjoys music. Kai is a crazy and funny guy that can slap bass like no one else and Chris can pull a drum solo out of nowhere that would blow your mind.”

UU: “Stickyfest is an awesome desert band festival and we are more than honored to be a part of it. We met the brain of it, Greg Gendron, at a fundraiser for the Cranston Wildfire and he offered for us to play.”

CVW: You all are a fairly young band. What have your performances been like?

UU: “We have played a few small gigs here and there but Stickyfest is by far one of our biggest. We have played at the Palm Canyon Roadhouse and really love that atmosphere there too.”

CVW: What’s your take on the reputation of metal/hard rock music?

UU: “Metal and hard rock are what is always has been, for the diehards. We love it along with so many other genres and love playing it.”

CVW: Other than Stickyfest what are you planning?

UU: “We don’t have much scheduled, but we try to play at the Palm Springs Roadhouse every other week on Sundays.”

CVW: What’s it like being from Palm Desert, the home of “Stoner Rock”?

UU: “Palm Desert is an amazing area full of amazing people. The area is so open to any type of music, especially heavier music. Our neighbors ask why we put the garage door down and try to play quiet because they love our sound. They tell us to play louder! You can’t find that friendly atmosphere anywhere else. It’s amazing!”

CVW: What do you want to say to “El Sancho”?

UU: “Just a big thanks to Greg and Sticky Doll for allowing us to play this awesome gig!”

DirtBoys: “DirtBoys rock hard because we’re lyrically unique and can play for hours. We have a certain passion for music that you don’t see that often these days. We like to call it ‘grunge-alternative.’”

CVW: Tell us about the band.

DirtBoys: “Damian AKA, ‘Demon Lee’ on vocals and lead guitar, David on the 5-string bass and Jimmy on drums.”

DirtBoys: “Our thoughts on Stickyfest are that it’s going to be a day to remember. We’ve got a lot of our friends, fans and family rooting for us and waiting to see what we’re going to do next. A lot of bands that we’ve grown to know are going to be playing right here in our hometown.”

CVW: What have been your most significant and memorable shows to date?

CVW: What is the state of metal and hard rock music in your opinion?

DirtBoys: “Heavy Metal and Hard Rock is definitely a state of mind and not a place for the faint of heart with a number of realist fans that can relate to the music.”

DirtyBoys: “Living in Twentynine Palms is pretty cool for the city boy. Got to know a thing or two about the Marine Corps out here. You’ll learn to get by on what’s available.”

CVW: How familiar are you with the desert rock scene and its lore?

DirtBoys: “DirtBoys are very familiar with the desert scene out here and hope to play all the big concerts that are available to us within our genre. We enjoy playing on stages. That’s where we feel alive!”

Keep an ear and eye out for UU and DirtBoys!