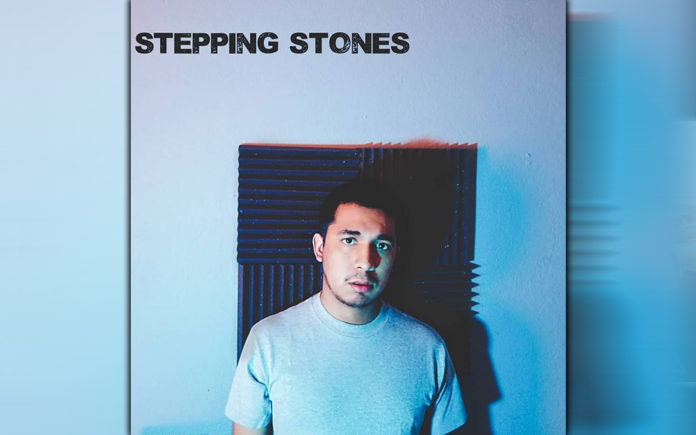 Razor J released Stepping Stones, his first EP, in October 2018. Razor J, aka Juan Espino, has gradually become one of the most inventive musicians in the Coachella Valley who combines his resonant knowledge on Stepping Stones. As a rapper and songwriter he is wholly focused on his words. Razor J also claims the titles of guitar hero and piano prodigy. Razor J won the 2018 Coachella Valley Music Award for ‘Best Guitar’ and his tickling of the ivories is distinguishable on the release.

Razor J’s ability to operate a six-string only enhance his lyrical skills. His musical influences range from Big Pun to Led Zeppelin and Eminem to John Mayer. Stepping Stones is representative of his multifarious background. With six genre-crossing tunes, the self-produced EP is dense and provides 20 minutes of Hip-Hop, Rap, Jazz and shredding guitar work.

According to the award winning guitarist, “This project took longer than expected, but it’s just one tiny part of my future. It taught me so many things about writing, producing, mixing etc. I already have loads of new songs, and my music has evolved so much through this process.​”

A product of Indio, California and swayed by the Coachella Valley Music and Arts Festival, Razor J has developed into a highly regarded rapper, producer and multi-instrumentalist. Razor J is due to perform at the Desert Music Rap and Hip-Hop Showcase presented by Coachella Valley Weekly and The Hood Bar and Pizza. Also performing are THR3 STRYKES, CKEELAY, AL RO$$I, WILLDABEAST and DOZZI DOZ. Cost of entry is $5. Doors open at 9 p.m.

Coachella Valley Weekly spoke with Razor J about the new EP and his participation in the showcase.

CVW: Stepping Stones is a great and eclectic first release. What has been the response you’ve received thus far?

Razor J: “Thank you! It’s been good. People have been sharing it online, messaging me telling me they vibe with it and have shown others, and adding it to their playlists. I’m not the type of person to shove everything I do to people, so there’s been surprise among friends who just knew me as a musician, but not a rapper. Also, it was featured by a couple of blogs so people outside of my circle from all over are hearing it, that’s been awesome.”

CVW: Tell us about the contributors on the EP.

Razor J: “I have a lot of great featured performers on Stepping Stones. Tomas Granillo is drumming on ‘Raw’ and ‘King,’ Samantha Valdez sings on ‘King,’ Ariss Durazo sings on ‘If I Asked’ and Jakebreh Beats helped with the drums on the ‘Need To Know’ beat.

CVW: This is your first official EP release to the masses. What are you hoping for Stepping Stones to accomplish?

Razor J: “I titled the EP Stepping Stones because I do see this project as such, a stepping stone to bigger and greater things. This is the first step to really increasing my presence in the valley, the music industry, making a career as a recording artist and to securing a legacy with my art. I’ve got a ridiculous amount more to go, but I’m going to keep pushing and creating to reach my goals. This project took so long though; I wrote new songs while finishing it so I’ll have another one out in a few months. With that said, I have a music video out on YouTube for ‘Remember’ and hopefully a few more coming too. I just want to reach people with my music, grow and take this dream of mine to as big as it can get.”

CVW: How do you feel about your participation in the Desert Music Rap and Hip-Hop

Razor J: “I love the idea behind the showcase. There aren’t too many opportunities for rappers in the valley. There’s obviously a scene, shows, and a lot of talented artists in the valley, but to a lot of people I talk to, it still seems that the valley doesn’t have a strong Hip-Hop scene as in other places for whatever reason. But things are changing and I think that’s great. I’m hoping and trying to get a lot of people out to the show.”

CVW: What are your thoughts on the other artists you’ll be performing with; THR3

Razor J: “I really like that all the artists are different from each other. Hip-Hop is such a diverse genre. A ‘Rock’ group can range from insane Metal music to a folksy acoustic unit and Hip-Hop is the same. I haven’t met DOZZI DOZ, I’ve met Alex a few times, and WILLDABEAST is steadfast, but THR3 STRYKES and CKEELAY are the homies. I’ve listened to everybody’s music though and it should be a fun night, if you like Hip-Hop at all, there’s definitely going to be something there you can vibe with.”

Although this is the first Razor J EP, it’s the proper introduction to his world and one of many “stepping stones” that will lay the foundation for future releases.