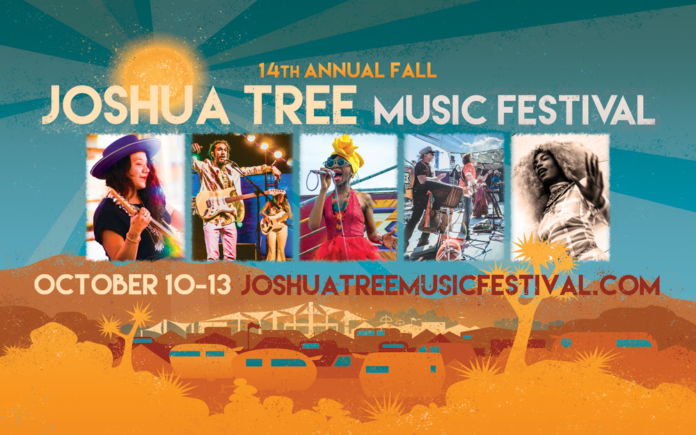 What do a heavy metal throat-singing band from Mongolia, a jet-setting DJ from London and the Punk Empress of Afro Pop have in common with local bands from Coachella, Palm Desert and Joshua Tree?  You can see them all at the 14th Annual Joshua Tree Music Festival taking place from Thursday, October 10th through Sunday, October 13th.

Over these four days, festival-goers get to see more than thirty musical performances from some of their perennial favorites along with tomorrow’s top acts toward the start of their careers.

Those arriving on Thursday typically partake in the annual rice, beans and beer dinner offered to all at no additional charge at the Boogaloo Stage.  The beatscapes of Long/Division aka Daniel Davis begin at 5:30pm and continue well into the night.

For those looking for other food and beverage options, choices run the gamut including pizza, tacos, ethic foods, vegan choices, juices, coffee bars, a full bar and more.

At 9:30pm, crowd favorite Earth Arrow returns from Los Angeles to showcase their 2019 debut album, Pachamama.  English has high praise for Earth Arrow, “They are like Santana, War and TLC all wrapped into one.”  Earth Arrow’s “music with a message,” offers English, is a powerful mix of hip hop and dance rhythms that draw liberally from Latin, reggae, rock and rap influences while sharing stories that reflect some of the challenges, realities of thoughts facing underprivileged youth growing up in South Central Los Angeles.

Each day early risers can join in meditation or yoga as early as 7am each day while musical performances begin at 10am on the Café Stage.  Amanda Davis gets us started on Friday, Sone on Saturday and Diana Gameros on Sunday.

Friday, 1:45p: Myshkin Warbler – The Village Voice called Warbler “sad, smart and weird” while The Washington Post described her as “…both lyrical and politically pointed.  A rich blend topped with her broad-ranging, keening voice.”  Her music has been described as electronic post-rock, gypsy-swing or desert-blues depending on the track.  Her 2018 album, Trust and the High Wire is Warblers’ poignant and moving personal story.

Friday, 1:45p: Gold Souls – Led by the vocals of Juniper Waller, The Gold Souls are reminiscent of the some of the great funk/jazz to come from Northern California.  Expect Gold Souls to perform their latest single, “Strongman,” which dropped last month.

Pick of the Festival, Saturday at 1:15pm: Steve Poltz – English saves his highest praise for festival regular, Steve Poltz, “Possibly the greatest entertainer that I’ve ever witnessed.  Armed with voice, wit and guitar, Steven will make you laugh, cry, sing, hug, dance and laugh – all in the same song!  Born in Canada but raised in Palm Springs, Poltz is best known for “You Were Meant for Me,” his 1996 duet with Jewel that reached #2 on the Billboard charts.

Pick of the Festival, Saturday, 3:00p: Cole Williams – The New Orleans-based Empress of Afro Pop joins us again following her well-received performance at the Spring festival.  Williams shares her latest album, Believe, for us on Saturday.  Please see our feature article on Williams for more information.

Sunday, High Noon:  Ameritakripa have been performing their trance-inducing kirtans in the High Desert for over twenty years. Mixing Tibetan chanting, Eastern Indian music and African rhythms with contemporary Afro-acid, psychedelic and rock influences, Ameritakripa is the perfect band to kick off Closing Day.

Sunday, 3:30p: Orchestra Gold – This northern California-based psychedelic rock and soul band is fronted by Mariam Diakité of Mali. Drawing from Mali’s musical history, the band blends its unique rhythmic sound with rock and soul to create an infinitely danceable soundtrack for a Sunday afternoon

Pick of the Festival, Friday at 7p: The Hu – “Other-worldly” is how English describes this Mongolian heavy metal throat-singing band. Named after the Huns of the ancient Mongolian empire, their first full length album, The Gereg, was just released.   Using traditional instruments like a horsehead fiddle, Mongolian guitar and guttural Mongolian throat singing, The Hu are like no other group that you will see this year.

“I read an article about The Hu last fall, watched one video, and contacted their agent straight away.   They are currently on a SOLD OUT tour (their first in North America), and are coming (to JTMF) real hot,” shared English.

Friday, 8:15p: Desert Rhythm Project – This Joshua Tree band is a staple to the festival for good reason; their music is the embodiment of the High Desert sound.  DRP fuse reggae, neo-roots, funk, soul and the uniquely uplifting high desert sound to create a sound-pleasing sound that gets the desert floor shaking.

Pick of the Festival, Friday at 10pm: The California Honeydrops – These festival favorites will turn Friday night into a party.  From their humble origins as subway station performers in Oakland, guitarist and trumpeter Lech Wierzynkski and drummer Ben Malament now travel the world with performers like Bonnie Raitt, B.B. King, Allen Toussaint, Buddy Guy, and Dr. John.

Pick of the Festival, Saturday, 8:15p: BalkanBump – “This super group from San Francisco is creating some of the greatest live dance music today,” says English.  Returning to JTMF with a full band is Will Magid aka Balkan Bump.  This performance will fuse Magid’s trumpet with Balkan Brass, electronica and rap to create a show certain to build upon his memorable set at last fall’s festival.

Pick of the Festival, Sunday at 7p: Adam Freeland closes the festival with a four-hour set.  Freeland has played at some of the world’s greatest venues over the last twenty years.  Whether performing at his club in London, Joshua Tree, Coachella or a super club somewhere around the world, a Freeland set takes you on an electronic journey like few DJs can achieve.  Freeland was nominated for a Grammy for his remix of Sarah Vaughan’s “Fever.”

In addition to the music, festival-goers get a full schedule of yoga, art, kids activities and educational experiences.

Everywhere you turn, you will see the work of dozens of artists in creating the beauty and magic that is the Joshua Tree Music Festival experience.

“Check out the SOUND CAVE on the east side of the lake by the YOGA venue,” suggests English.  The exhibit is “five pianos dismantled and re-built into a five-sided cave where you lay down inside while folks outside strum the exposed strings.”

Is poetry your thing?  Find the Typewriter Troubadour, Jeremy Brownlowe, who might write one-of-a-kind poetry for you on his old typewriter.  Just ask him nicely.

“This is a very kid friendly event,” states English.  Many publications including Fatherly Magazine and Trip Savvy agree and list JTMF as one of the top music festivals in the United States for kids.

All children under 10 attend for free while those up to sixteen years of age are admitted at half price.  Kidsville is opened from 10am to 6pm each day.  Activities are varied and numerous including trash can and parasol painting.  Kids get to put on their own shows at the SchoolBus Stage.  Musicians like Cole Williams and Steve Poltz from the festival often come over for musical enrichment.  Chime assembly, yoga, storytelling, performing in a band and more go on throughout the day.  Just as important as the diversity of experiences, most activities are in heavily shaded areas with access to lots of water.  Most kids enjoy the wheeled pirate boat that drives around the lake while children and pirates alike sing and carrying on during their seven minute excursion.

Dozens of artisan vendors reside to the right of the main stage.  Whether you are looking for hippie chic, jewelry, drums, a gong or a bong, unique offerings abound at reasonable prices in comparison with most festivals.

If you can’t make this fall’s show, the 18th Annual Joshua Tree Music Festival is already set for Thursday May 14 through the 17th.  “We have 75% of the line-up confirmed,” says English.