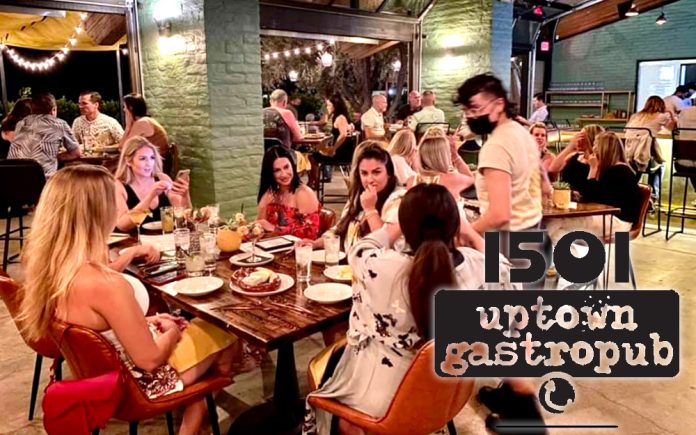 Sunday Funday. Simply the title holds the promise of hope, the kind of hope which whispers to an individual, “Let’s go do this!”. Since Sunday is generally my only day off, it is also my best opportunity to head out and explore my new desert surroundings.

This particular Sunday began sunny and hot…but there isn’t much of a surprise there. I pointed my trusty steed toward DT Palm Springs to see what had become of the property I remembered to be The Draughtsman. Located a short chip shot from ARRIVE Palm Springs, word had filtered to me that Draughtsman was gone and had been replaced by the upstart 1501 Uptown Gastropub.

Pulling into the expansive lot, I was first struck with the disbelief that so few parking spaces remained at 11:45am. It was to be the first in an endless string of pleasant surprises this visit would hold. Having secured a spot for the truck, I quickly made my way through to heat to the main entrance.

Upon entry, I was greeted by perfectly adjusted air conditioning and a pair of smiling hostesses. I quickly obtained a solo seat at the bar as the place was bustling and I didn’t want to take up a whole table for just little ol’ me. Even though it was a few ticks before Noon, the joint was jumping with energy a really upbeat vibe. There were no indoor open tables after 12:15 and people everywhere were engaged in conversation.

My first peek, of course, was the beer list. The 24 draft beer handles deliver a relatively decent number of styles with a nice mix of local fare, regional craft brewers, and a couple of very impressive import selections. On the lighter side, Scrimshaw Pilsner and 1501 Light (which is made by Figueroa Mountain if my taste buds were working correctly). These two are joined by a North Coast Laguna Baja (a Vienna Lager), Alesmith’s Mexican Lager, and Blonde Ales from both Mission Brewing in San Diego and Strand Brewing Co. in Torrance. Add the always impressive German Konig Pilsner to round out the category and one would conclude that using 33% of the taps to satisfy the majority of their beer consuming demographic is a pretty sound strategy.

Moving into the maltier side of the spectrum and the lead beer is Bell’s Brewing Amber Ale. This is the beer that launched Larry Bell & Company back in 1985 and continues to be a benchmark for the murky category. Fuller’s ESB, another benchmark example, arrived from London in fine shape and I find it refreshing (pun intended) to make such an unexpended find. Tabula Rasa, a Porter from Second Chance Beer Co. in San Diego holds down the dark and roasty grouping in style.

As might be expected, the Pale Ale and India Pale Ale tap handles dominate from here. Imagine my astonishment at finding not one, but a pair of Pale Ale offerings on the menu. Figueroa Mountain’s excellent Mosaic Pale Ale tasted fresh and Offshoot Pale Ale, from the fine folks who bring you The Bruery was outstanding as well.

Leading the charge for the IPA’s is the current #1 IPA in the nation (according to Zymurgy Magazine), Bell’s Two Hearted Ale and it didn’t disappoint. Latitude 33’s Blood Orange IPA is the Vista breweries flagship brand is always a crowd favorite. Lost Coast Revenant IPA, Stone Delicious IPA, and Boomtown’s Limelight IPA round out the clear and West Coast IPA variations.

Hazy IPA’s have their place at the table at 1501 as well. La Quinta Brewing Co. Haboob Hazy IPA earned a spot on the tower as well as an opaque offering from Eureka’s Lost Coast Brewery. Almanac from Alameda finishes up the translucent trio with their LOUD! Hazy Double IPA…clocking in at a respectable 8.0% ABV without transmitting the heat on the finish.

Coachella Valley Brewing is pouring their Desert Citrus, an American Wheat flavored with tangerine…a fun selection on a brutally hot day. On the other end of the beery spectrum is another fun surprise, Delirium Tremens, a superb Belgian Strong Golden Ale with a beefy 8.5% ABV. The allusion to pink elephants and the choice of names is not by chance. The uniqueness of this golden elixir is triple fermentation using a total of three completely different yeast strains; truly an odd combination in a world where procedures change very little over the course of a hundred years.

The tap list concludes with one non-beer submission, 2 Towns Ciderhouse BrightCider from Corvallis, OR. The 2 Towns folks take a lot of pride in that they grow all of their own apples and do not buy juice from independent growers or the secondary market (and I’m looking right at you, Angry Orchard).

In terms of presentation, all of my beers arrived in perfectly prepared beer-clean glasses…not an easy feat in a busy gastropub. There was not a single clingy CO2 bubble on any of the inner walls of the glass and head retention was fantastic, especially the IPA’s. No off-flavors were detected that would indicate dirty tap lines or hardware and all products tasted were fresh and bright. Perhaps we can take this as a sign that the brewery distribution side has finally recovered from a debilitating 2020.

Once all the indoor tables were filled, action began on the wraparound patio. Despite the triple-digit temperatures, the patio was cool enough to be comfortable with more than enough misters permanently in place. Spot cooling is also available with the help of a duet of Big Fogg machines. The patio crowd showed the same upbeat enthusiasm as the indoor crowd; a wonderful accomplishment and show of dedication by management and ownership.

Have I neglected to mention the food? Despite the busy conditions, staffing levels looked appropriate and everyone emanated a positive attitude. My bartender took my food order at 11:55 and I had my brunch delivered at exactly 12:02pm. Any kitchen that can execute a seven-minute ticket time has to be properly staffed and running like a Swiss watch. A peek at the skirt shot of my Sunny-Side-Ups showed that the eggs were perfectly prepared and everything was hot and fresh.

In closing, my initial disappointment in losing Draughtsman has been completely erased by my enthusiasm for 1501 Uptown Gastropub. A rock-solid beer selection (as well as wine and a full bar), wonderful edibles that are reasonably priced, professional staff, and great climate and atmosphere make 1501 a must see for any valley dweller.

(When Ed Heethuis isn’t brewing at Spotlight 29 Casino for 29 Brews, you will find the Certified Cicerone® / Brewmaster out on his road bike, training for the next Olympic horseshoe competition, or talking beer with the patrons at Taproom 29. He may be reached at: heethuis.ed@gmail.com or wherever beer may be found in the wild.)