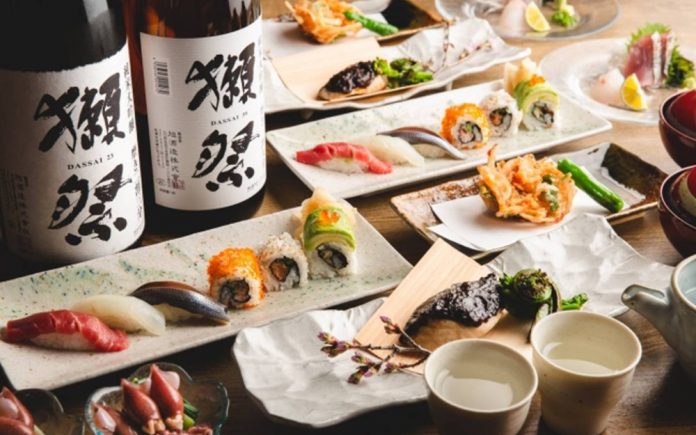 Three or four decades ago, sushi quickly became the trendy dish with sushi bars opening throughout Southern California.  I was slow on the sushi up-take as I was still enjoying the hot & spicy cuisine of Thai, Indian, and of course Vietnamese that were still popular at the time.

Indeed, I was somewhat out-of-the-loop when it came to joining my friends and associates for lunch at all the new sushi venues about; a touch unsettling for one who thought himself to be a foodie-type.

Around the same time, as I was practicing law in Orange County, I began to pick-up more and more cases in L. A., as I had begun representing an Armenian trash hauling company which led to a lot of referral cases.  I found myself appearing in the L.A Superior Courthouse quite often—of course, dealing with the freeway traffic between the two counties.  And to my consternation, it also meant I was paying beaucoup bucks for decent parking.

It just so happened that a small second floor office space was available right across the street from the Parker Justice Center on San Pedro and 1st street.  For those of you who know downtown Los Angeles, it was the location that was right on the border of what is affectionately known as “Little Tokyo”—with its share of delicious Japanese fare.  And the deal on the office space was that the rent was much less than what I was paying for parking!

It was a great spot!  Right by the courthouse, and it was a convenient outpost to avoid the late afternoon traffic back to the O.C.  Unbeknownst to me, but rather fortuitous, on the 1st floor below me, were the offices of Matao Uwate.  I had no idea that this famed Japanese chef and radio personality was one of the most well-known Japanese Americans in Los Angeles.

For 35 years, Uwate, the host of “Radio Li’l Tokyo,” had spun rare recordings of Japanese classical and popular music and provided local news and announcements about weekly activities in Little Tokyo.  At nights, he held competition from local Japanese-language television programs. But for an hour on Sunday mornings on station KTYM (1460 AM), there is only Uwate to remind Japanese Americans of life before America.

Uwate described most of the records he plays as “Japanese blues songs—lots of rain, tears, drinking sake, love lost.”  Uwate was also a master-chef, critic, and teacher in Japanese cuisine—which of course included sushi preparation.  And he was “old-school” when it came to sushi—one would never mention a “California Roll” in his presence!

One day I happened to glance at his office door and took notice of a Japanese cooking class he was offering.  There were only 8 slots available; and with the sushi craze going on—and as I found out later—many in the L.A. foodie scene was vying for a spot.  I got into the class at the last moment when a San Franciscan chef had to bow out.

The class would meet at the modern Buddist temple kitchen close by, with Chef Matao bringing in all of the fish and cooking ingredients necessary for the day’s instruction.  Remember, this was in the early 80s before all of the cooking fervor took hold; the experience was so exciting.  Add to the fact that when the Chef designated four two-person teams to learn and cook together, he teamed me up with Robin Roy—the daughter of famed rotund celebrity chef Mike Roy.  Robin, at that time, was also one of the L.A. Times food writers.  I took advantage of the opportunity, and just like that, I was ushered into the L.A. food scene with the connections I was making!

One of Chef Matao’s classic moves—when we met on Saturday mornings, was to open up cans of Budweiser beer for everyone to help fuel us through the day.  His classes were thorough in classic Japanese cuisine.  We learned different styles that included Yosenabe (hot soups), Teppanyaki, Yakitori, Sukiyaki, Sashimi and of course, Sushi, where we learned to filet the fish, prepare the rice, attempt different recipes, and properly organize and serve.

Chef Matao was an absolute character with a little curmudgeon on the side, a bon vivant none-the less and truly enjoyable to get to know.  On our last class, we had to do a “final exam” dish. The competition was on! I remember preparing Chirashi Sushi, a deconstructed Sushi dish—a Japanese “pizza” if you will, that’s prepared in a beautifully decorated large wooden dish.  I was going for the fences!  It was probably the most artistic thing I had ever done.

Chef was enjoying himself acting all stern and serious as he gave a “final grade” to the eight submitted dishes. When he came to my kitchen station, he saw and tasted.  In his inimitable rough Japanese accent, he told me, “I never give an “A” in my classes; and you’ve only started cooking Japanese so don’t expect a “B”—you be happy with “C”.

One of the other classmates was an older Japanese lady who never seemed to have as much fun as we were all having.  Poor lady—while she was transferring her final dish to the station table, it slipped from her hand and fell onto the floor.  Without missing a beat, Uwate pointed to the mess and said, “For this you get “F”!  I don’t even think he cracked a smile right after that comment, but he did crack open some more Budweisers as we all celebrated and said our goodbyes.

This story may well be the longest introduction to sake and sushi paring in food journalism.  So much so that we’ll take up the subject next time.  Kanpai!—Cheers!