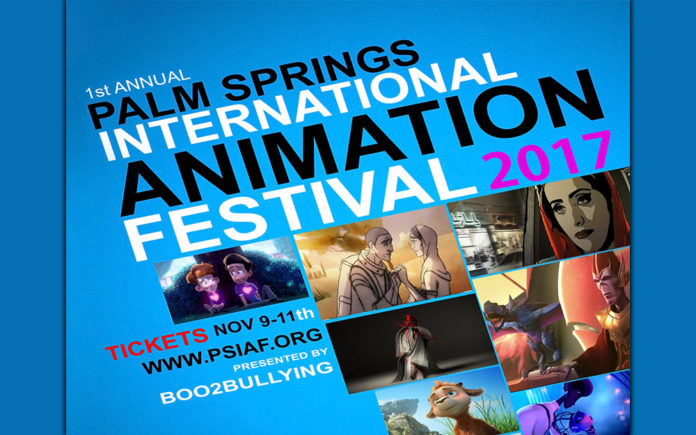 Tickets will be available on www.psiaf.org.

This fun family event will feature screenings of more than 34 categories, 300 short and 6 full length films from 103 countries over three days. Films from Cannes, Annecy, Sundance, and Tribeca as well as Oscar and Grammy winners will be presented in the Palm Springs Art Museum’s Annenberg Theater, Richards Center for the Arts at Palm Springs High School and the Tolerance Education Center in Rancho Mirage. In addition to the screenings and a local animation competition, a full complement of panel discussions, seminars and social events will provide the forum for an estimated 400 attending filmmakers, directors, writers, visual artists and students from around the globe to showcase their work and celebrate Global Animation film making.

Panels include: Thursday, November 9 – Special programing at the Tolerance Education Center, Rancho Mirage 1pm screening of “Weeds” followed by “The Making of Weeds.” WEEDS is the story of a little Dandelion struggling to get from the dry, barren side of a driveway to the other side, where water is plentiful and the grass is greener. After watching neighboring weeds wilt and die, the dandelion faces a decision – take action or suffer the same fate.

Weeds is also screening on Nov 10th at 4 PM at the Annenberg Theater at the Palm Springs Art Museum in the Best 3D Animated Drama Category November 9, Charlene Mosley and Tiffanie Mang, artists from “Loving Vincent.”

November 10, Academy of Dream Awards, Conversation Panel with Dani Bowman, Joel Anderson & Project Passion. “Animation is a very difficult form of art and can take a great deal of time to create, if you’re disabled that challenge is magnified. PSIAF is absolutely honored to celebrate some of the talented animators, who despite their disabilities, have created incredible animated short films. We will be featuring these powerful shorts from The US, Slovakia, Sweden and the UK.”

Children’s Animated Short Films: Being that kids are enthralled by animation, PSIAF plans to feature animated films geared towards kindergarteners and preschoolers. These fun and colorful films will hail from Chile, Romania, Argentina, Israel, Taiwan, France and The US.

This special segment is specifically geared for these kids (5-10 years) to experience new and different ways of storytelling, as well as introducing them to animation from other countries, expanding their view of art around the world and many different cultures.

LGBT Animated Shorts, are particularly special since they reach a younger audience who are still coping with coming out as Gay, Lesbian, Bi or Transgender. Relatively new are the LGBT animated short stories that inspire a new generation to feel they can be themselves and find acceptance even in schools where bullying and social acceptance remains a big issue. We’re honored to share these powerful animated films with a community that understands the larger struggle and the hope of a future where we can find love, acceptance and tolerance.”

Animated Music Video Category: Since the inception of MTV some of the coolest songs have been told through animation, allowing for an unending world of creativity. Animation and music have long gone great together. In this category you will experience some of the years most celebrated music videos from around the world including Elton John’s 1972 version of Rocket Man which has gained a mass critical acclaim. Prepare to be rocked!

Elton John’s classic 1972 track finally has an official music video. Majid Adin and Stephen Mc-Nally bring you a film of urgent humanity and personal longing. It draws on Majid’s personal experience as a refugee after fleeing his native Iran, travelling across Europe, spending time in the infamous Calais jungle and successfully securing asylum here in the UK.

This long-awaited official music was commissioned as part of THE CUT – a global competition in collaboration with YouTube to celebrate the 50 year hit- making partnership of Elton John and Bernie Taupin. Majid’s treatment was chosen above entries from 50 different countries by a selection committee comprising illustrious talents Oscar-winner Barry Jenkins, Dreamworks CEO Jeffrey Katzenberg and PES. Rocket Man and the other two videos commissioned in the competition, for Bennie and the Jets & Tiny Dancer premiered at this year’s Cannes Film Festival 2017.

“We have received more than 2,700 submissions in a variety of styles ranging from 2D, 3D, Stop Motion, Hand Drawn, Watercolor, Paper, Sand, Oil Painting, Abstract and Experimental,” according to Brian Neil Hoff, Director and Founder of the PSIAF and the Palm Springs High School Animation LAB, “Animation if a powerful form of art with the ability to educate, inform and inspire a new world of storytelling with unlimited possibilities. Our goal and passion with this new Festival is to celebrate amazing animated films, the talented artists and their teams from all over the world.”

“Art is what binds us together and what prompts us to ask questions of ourselves and of others. As artists, we have the ability to challenge and transform the world and inspire a new way of thinking through various art mediums such as film making,” explains Dimitri Halkidis, Founder of Boo2Bullying, the nonprofit organization based in Palm Springs and Los Angeles, which seeks to promote understanding, engagement and unity against bullying and intolerance.

WHEN & WHERE: Thursday and Friday November 9-10, at the Annenberg Theater; and Saturday, November 11, at the Richards Center, Palm Springs High School. Thursday. November 9 Special programing at the Tolerance Education Center, Rancho Mirage 1pm screening of “Weeds” followed by “The Making of Weeds”