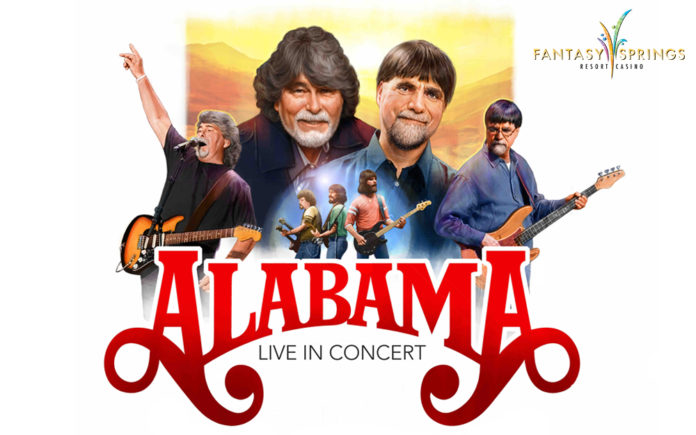 Alabama is the band that changed everything by bringing Country music to the mainstream. They are the band that introduced rock-style guitars, lights, and pyrotechnics to the Country audience and they are bringing their “Southern Drawl Tour” to The Special Events Center at Fantasy Springs Resort Casino on Saturday, November 11, 2017.

The story of Alabama is a classic American tale of rags to riches. From humble beginnings picking cotton in the fields of Fort Payne, Alabama, Randy, Jeff and Teddy became international stars that went on to sell 73 million albums while changing the face and sound of Country music.

In 1980 the band broke through with their first Top 20 hit “My Home’s In Alabama.”  What followed was a string of hits like “Mountain Music,” “Born Country,” “Forever’s As Far As I’ll Go,” “(God Must Have Spent) A Little More Time on You” and “If You’re Gonna Play In Texas (You Gotta Have a Fiddle in the Band),” a run of success that is legendary in the history of Country music.

Alabama released a new studio album called Southern Drawl in 2015, which landed them on the covers of USA Today, People Magazine, Rolling Stone and Country Weekly. Adding a new chapter to an already iconic legacy can be a little tricky, but the album skillfully walks the line between the fresh and familiar, featuring a potent collection of songs for a new generation of Alabama lovers while also giving longtime fans plenty of reasons to rejoice.

Critics and fans alike continue to shower Alabama with accolades. They were honored with the ACM Career Achievement Award at the Ryman Auditorium in 2016 and were awarded “Album Of The Year” at the 2015 Dove Awards for Angels Among Us.  40 years after their founding, Alabama is still going strong and they continue to roll on.

From Publisher Tracy Dietlin: Teddy Gentry, bassist for Alabama took time from the road to answer a few questions for CV Weekly.

CVW: You’ve won so many awards and received many accolades. What would you say has been the highlight of your career to this point?

Teddy Gentry: “Going into the Country Music Hall of Fame was probably the biggest moment for me.”

CVW: You recently recorded your first Christmas album in 21 years. Can you tell us a little bit about that?

TG: “Well, it started with writing a couple of new Christmas songs. Then our label, BMG, asked us if we wanted to record a Christmas album. We said we would be interested but it was contingent on finding great songs. And we felt like we did, so we went in and recorded this new record.”

CVW: You also recently just performed for 5 living Presidents to raise money for the hurricane victims. Can you share about that experience? And what it means to you to give back?

TG:  “It was an incredibly opportunity, and also incredible to be able to have our photo with the 5 living Presidents. It was nice to be personally asked to perform on the show by President George Bush 41.”

CVW: How do you keep it fresh singing the same hits that we the fans all >love over and over for all these years?

TG:  “Well, every night I tell myself that someone out there in the audience is seeing the band for the first time. And that’s the one opportunity I have to give it my best shot. I have found a different way to find a new move that helps keep the show and my playing fresh.”

CVW: How do you feel the music business has changed since Alabama first started?

CVW: As the best-selling country band of all time what advice would you give up and coming bands?

TG: “The songs are most important. IF you can find a better song than the one you wrote, then cut that song. Few people are great writers and also performers at the same time. Cutting the best song is the most important part of your career as an artist. And you also have to strive for your own identity. Don’t be a copy.”

CVW: Anything your fans would be surprised to know about any of you?

TG: “Several times a year, when I’m off the road with ALABAMA, I have offers to speak at Cattlemen’s Associations.”