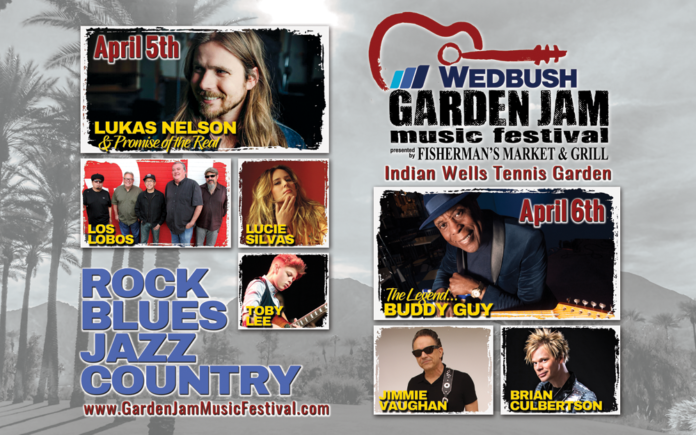 Coachella Valley Weekly was able to connect with festival host jimi FITZ for a quick moment as he paced his hallway preparing for every possible scenario.

CVW: This has to be exciting for you and Wendy. What a phenomenal event.

FITZ: “We’re burning on all cylinders. We got a nice little buzz happening. We’re just trying to put big events on and make them out-of-the-box with a great music blend. The timing is awesome with all that is happening with these artists.”

FITZ gave us his take on all the artists:

FITZ on Lukas Nelson and Promise Of The Real

“We all know what’s happening with Lukas Nelson and Promise Of The Real. It’s been an amazing trajectory for him. I got turned on to him pretty much with Promise of the Real doing their thing with Neil Young at Desert Trip. Almost like Bradley Cooper, he caught my eye those two weekends as well and obviously then following the progression of how that evolved. We actually wanted Lukas last year and it didn’t work out with his touring schedule plus he ended up doing Stagecoach Festival so we couldn’t do him last year. I’m excited this is his first return since he played Stagecoach last year and a lot of people said they were the best band at Stagecoach period. With all the desert connections to A Star Is Born and all the scenes that were shot here, it should be momentous.”

“Buddy Guy is sounding better than he has in ages. He’s got a renewed fire and this new album, The Blues is Alive and Well, with Jeff Beck and Keith Richards and Mick Jagger guesting on it is really cool. He’s a 9-time Grammy Winner and 2005 member of the Rock and Roll Hall of Fame where Eric Clapton inducted him. He’s on this big tour swing. Saw him not that long ago on Austin City Limits and he just killed it. I feel so honored to have the opportunity to work with him and having him a part of this.”

“We’re excited about Los Lobos being a part of the line-up. People don’t know how great a rock band they are. They’ve been nominated for the Rock and Roll Hall of Fame. They have been consistent and are at the top of their game. They continue to inspire many musicians. I appreciate those who get it. They have their connection with La Bamba. If you were just to strip everything away, they are a great rock band and always have been. They fit the weekend perfectly.”

“What can you say about Jimmie, multiple Grammy Award winner, Stevie Ray’s big brother, his partner in the Vaughan Brothers, one of the founding members of The Fabulous Thunderbirds, he’s been touring the country with Eric Clapton and Clapton has been showing up at his gigs. We originally had wanted to put in an offer for Jimmie to perform Friday night but he asked to precede Buddy on Saturday night so we’ll see if that leads to any interesting stuff happening.”

“She was born in the UK, raised in New Zealand and lives in Nashville. She’s married to John Osborne, of country music duo Brothers Osborne. She had a million selling album called Letters to Ghosts in 2015. She’s toured the world with Elton John and so many various artists. She calls her music ‘genre-less’. She has a new album called E.G.O. She’s an amazing artist! A little Pop, a little Country, a little Americana and a little Blues. Check her out on YouTube she does an amazing rendition of Metallica’s Nothing Else Matters, it has almost 17 million views. I wanted to get a powerful female to kick-off the weekend. She really fits that bill. She’s excited about coming in. It’s going to be a great Friday.”

“He’s had so many self-produced number one albums through the years. He, Wendy and I have worked together for many years and I’m thrilled that he’s opening up Saturday night.”

“Joe Bonamassa calls him the “future of the blues”. He’s the 2018 UK Young Blues Artist of the Year. He just signed an endorsement deal with Gibson Guitars and they brought him over to NAMM Show in January. He played the private Gibson showcase at The Grove in Anaheim and jammed with Billy Gibbons of ZZ Top and Peter Frampton. He’s a unique and one of a kind talent and I’m so excited about some surprises we’ll hopefully have with Toby on that main stage over the weekend and also on our second stage he’s going to be paired with our own legend and Blues Hall of Fame member Kal David each night.”

CVW: Can you give us a sneak peek at the schedule?

FITZ: “Each night the gates are going to open at 4:30 p.m. 4:30-5 is Mic Dangerously of Zen Robbi and Mike and the Cartoon Cowboys, he’s gonna jam one with Toby. John Carey is going to play 5-5:30 p.m. his own set with Toby sitting-in with him on a couple of tunes. 5:30-6 Kal David with Toby is going to be classic on the second stage.

CVW: You have always had great food and wine offerings as well as other amenities.

FITZ: “Fisherman’s Market is going to have wine tasting. We have Miramonte giving the chair massages. Gameroom Gallery is going to have some music-themed pinball machines. We’ll have a boutique village, we have some art, the Karen and Tony Barone are doing a new art installation, we have Time McClendon the jewelry artist coming back who everyone loved last year. Clarks Nutrition will be giving away some cool stuff.

CVW: You’ve done an outstanding job in involving local artists in the event.

FITZ: “This is an amazing music community that we have here. It’s special, unique and I’m blessed and grateful to be a part of. It’s just a necessary love. It’s easy to do because we have such great talent that needs to be showcased. On that second stage, between the first, second and third acts, each night, we’ll have a showcase of about twenty minutes with various Academy of Music Performance bands being curated by Will Sturgeon. We’re including the AMP band family in this to give other bands a showcase and exposure on the second stage so they can be a part of the night to witness the legends we’re going to have on the main stage and be inspired and participate in a great desert weekend. I respect Will Sturgeon and Kate Spates so much and we just started the Steve Madaio Scholarship Fund at AMP in Steve’s honor. We’re just trying to spread the word about the great work that they do. The families and the young musicians who take it seriously and understand what a unique opportunity it is and learning experience even if they never pursue a professional music career it teaches them teamwork and improves their cognitive abilities through music.”

FITZ: “All the seating in the pavilion is reserved table seating which allows you to have a place to perch with your friends all night long. Bring your food and drink and park it there. You have access to the entire grounds and the second stage. There’s three different layers of table seating. Top layer is almost sold out, but gold and silver still have some tables available. We’re offering grounds passes at only $75 where you get to roam all the grounds, access to the second stage, vendor village and wine tasting. There’s plenty of tables all over the grounds.”

CVW: Where do you see the festival going?

FITZ: “We’ve had an amazing partnership with IWTG. We all share the same dream of building this to what it deserves to be. The trend all across the country is now leaning towards niche festivals. We’re not your typical field festival. We’re giving you the unique one of a kind environment there. I love being connected to music month and we enhance music month. We add to the conversation and the variety.”

The Wedbush Garden Jam Music Festival is a presentation of the Indian Wells Tennis Garden and Wendy Jayne Productions, Inc.