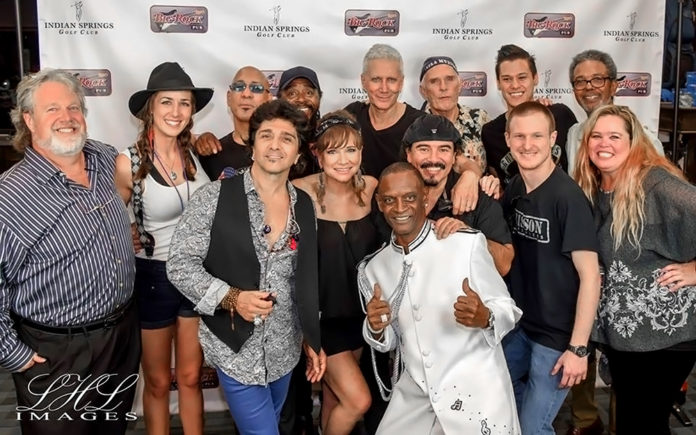 Thanks to the efforts of the Goldy McJohn Legends and Locals Tribute and Benefit Concert, held September 1 at Big Rock Pub in Indio, California, $5000 will be given to the Palm Springs Walk of Stars on behalf of legendary drummer, Alvin Taylor.

Fellow music legends joined Taylor in a performance that brought the Big Rock Pub venue to their feet and kept them there.  Headlining the bill were Terry Ilous, lead singer of Great White, Greg Douglass, guitarist for The Steven Miller Band, and Harold Brown (also known as The Cisco Kid) an original member of the band War.  The performance evolved into a tribute to Goldy McJohn, the founding father of Steppenwolf.  McJohn was originally scheduled to perform at the benefit, but succumbed to a fatal heart attack August 1, 2017.  McJohn’s wife, Sonja, attended and shared a few loving words at the event.

Joining the headliners were Carmine Rojas (bass player for David Bowie, Rod Stewart and Joe Bonamassa), Marcos Reyes (percussionist for War and Santana), Jeff Paris (multi-instrumentalist for Keb Mo, Ringo Starr), Ronnie Hammon (War), local artists Jacob and Thomas Stibbie, Dion Kahn, Bri Cherry, Courtney Chambers, and Lisa Lynn Morgan. The performance brought all those in attendance to their feet for the majority of the show, and gave fans an opportunity to meet and greet the icons immediately following.

“It was very exciting to bring legendary and local musicians together to help raise funds for Alvin Taylor’s star on the Palm Springs Walk of Fame, and of course, to pay tribute to my friend Goldy McJohn,” shared Anthony Spadaro Jr. Spadaro worked closely with McJohn and is the Managing Partner at HungryGenius®, a company that has been giving back to legacy music artists over the past decade.  “Those in attendance were obviously elated at what they experienced. On behalf of everyone who helped to make our very ﬁrst Legends and Locals™ Concert a success, we extend our most sincere thanks to those who came out in support of Alvin Taylor. Not only is Alvin a legendary drummer, he is one of the humblest, kind and deserving men we know. We are proud to announce that through the additional support of HungryGenius® and Big Rock Pub owner, Ken Hanna, we will be presenting a check to the Palm Springs Walk of Stars Committee, on Alvin’s behalf, in the amount of $5,000.  As we stand up for the music together and prepare to launch an alternative to popular music streaming sites, local music artists can look forward to sharing the stage with music icons in the future, as many more Legends and Locals™ concerts are currently being planned.

ABOUT ALVIN TAYLOR:  Alvin Taylor, the esteemed drummer, producer, and musical director started playing drums when he was only ﬁve years old. At 14, this Palm Springs native left home to go on tour with Little Richard. During his time with Little Richard’s band, he played with Jimi Hendrix, Billy Preston, and opened a show for Elvis Presley. After that, his resume went on to include George Harrison, Elton John, Sly & the Family Stone, America, Natalie Cole, Ron Wood and Cher, to name a few. Taylor has become well-known in the community for mentoring many of the local music scene’s up and coming artists, and  is a proud supporter of the up and coming HungryGenius® StandUp4Music Project that showcases and supports local original musicians elected to launch this fall. Visit Alvin Taylor at; www.alvintaylor.me