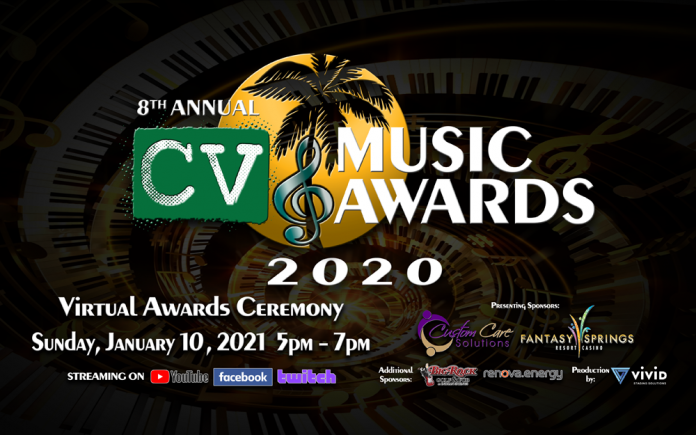 The 8th Annual CV Music Awards will take place this Sunday, January 10th at 5:00 pm. Phil and I will be hosting the 2 ½ hour event live from a recording studio without a live audience. We have several prerecorded live performances of bands and artists from different genres to keep the show interesting.

We will be giving out 29 of the 39 awards that were voted on with prerecorded acceptance speeches and the other 10 will be announced throughout the show. We will also be presenting this year’s Special Awards chosen by Phil and I, which were also prerecorded this week. Those awards include: The Trailblazer Award to Armando Flores and presented by Jeff Fortson; The Pioneer Award to Tony Tornay presented by Noe Gutierrez; The Icon Award to Keisha D presented by David Ross; The Lifetime Achievement Award to Kal David & Lauri Bono presented by Jimi Fitz.

We also added a couple of new awards this year due to Covid quarantine (hopefully this will be the only year we have to do these) and they include: “Live From the Living Room” with Josh and Linda Heinz and “Live From the Road” with Michael Keeth. These performers have been steadily keeping us entertained virtually every week since March and we wanted to show our appreciation. Another new award this year is Best Video which Phil and I selected and next year will become a voted on category. We selected the video “Under Attack” by Mega Sun featuring Mikey Reyes. This performance will open the CV Music Awards so make sure you are turned in right at 5:00 so you don’t miss them. You can tune in 15 minutes early to hear some pre music from some of the Best Song nominees while we are getting ready to start.

We will be streaming on YouTube, FB and Twitch. You will be able to find the links the day of on our website www.coachellavalleyweekly.com.  While there is no ticket price this year we will have our Pay Pal link up for anyone who would like to make a donation to CV Weekly/CV Music Awards before, during or after the event. It will be much appreciated. (paypal.me/coachellavalleyweekl)

In the past 7 years of the CVMAs we have done a 4 hour main awards event in June with a 3 hour pre-awards show event a couple nights before at Big Rock totaling 7 hours-worth of performers and all awards given out. This year we had to squeeze it all into 2 ½ hours so that is why there will be a handful of award winners that won’t be able to do acceptance speeches and we apologize for that. It has been daunting at best trying to figure this out this year with everything going on. We originally had planned on doing them in December, but had to reschedule twice due to the lockdowns. Everything we have done and will be doing the night of the show will be done with the greatest of safety precautions for everyone involved.

This event is being produced at Vivid Staging by Brian Champagne and co-produced by Robert Chance and Phil Lacombe and Myself.

The event has been made possible by our Presenting Sponsors Mandy Calvano of Custom Care Solutions and Fantasy Springs Resort & Casino along with the additional sponsors Big Rock Pub, Renova Energy and Mark Gregg & Misty Howell. We thank you all so very much for helping us to not let the music community down.

Read about our Special Award Recipients: