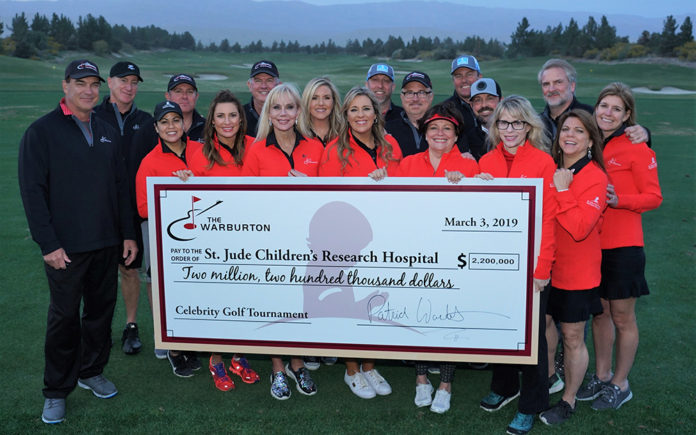 Today at the Classic Club in Palm Desert, CA, it was announced that the 9th annual Patrick Warburton Celebrity Golf Tournament raised $2,200,000 for St. Jude Children’s Research Hospital® this past weekend – February 28-March 3, 2019.

The event has grown to become “St. Jude Week in the Desert,” all to benefit St. Jude Children’s Research Hospital® – which is leading the way the world understands, treats and defeats childhood cancer and other life-threatening diseases.

As the highest grossing golf tournament for St. Jude nationwide, this year’s event pushes the grand total raised to $12 million since its inception in 2011.

More than 75 celebrities and hundreds of attendees traveled in from around the country to attend 4 sold-out events that make up the Warburton – which include Songwriters Night (February 28), the Rheneypalooza Jam (March 1), the Soiree (March 2) and the golf tournament (March 2 and 3). Rock and country legends, Nashville songwriters, actors, and sports figures gathered to be part of these music events as well as golf held at both the JW Marriott Desert Springs Resort & Spa and Classic Club.

Sold-out events included the Thursday night Songwriters Night, featuring some of Nashville’s top songwriters telling the “stories behind the stories” of country’s greatest hits. Featured songwriters this year were singer-songwriters Billy Dean and Jamie O’Neal – who have successfully recorded their own songs and had hit singles – as well as Kelley Lovelace and Tim Nichols, who have written #1 hits for numerous country artists including Tim McGraw, Brad Paisley, Kenny Chesney and Carrie Underwood. The evening was hosted by Robin Meade of Morning Express with Robin Meade on the HLN network.

“The feedback we’ve been receiving is that this year was our best event yet,” said Clarke Rheney, tournament chairman and the 2017 National Volunteer of the Year for St. Jude. “It’s a labor of love – every member of our Board is deeply passionate about St. Jude Children’s Research Hospital, and we can’t wait to raise the bar even further for our 10th anniversary next year. People will have to get their tickets and golf sign-ups early – it’s going to sell out quickly! The Warburton is the perfect blend of celebrities, musicians, golf and unique events, which is why those who have experienced it continue to come and tell their friends about it.”

The success of The Warburton would not be possible without the support of its sponsors: the H.N. and Frances C. Berger Foundation, Shakti Warriors, the Twenty-Nine Palms Band of Mission Indians/Spotlight 29 Casino, National Rental Car, Spinal Elements, the Greater Palm Springs Convention & Visitors Bureau, Tito’s Vodka and KESQ News Channel 3/Gulf California Broadcasting.