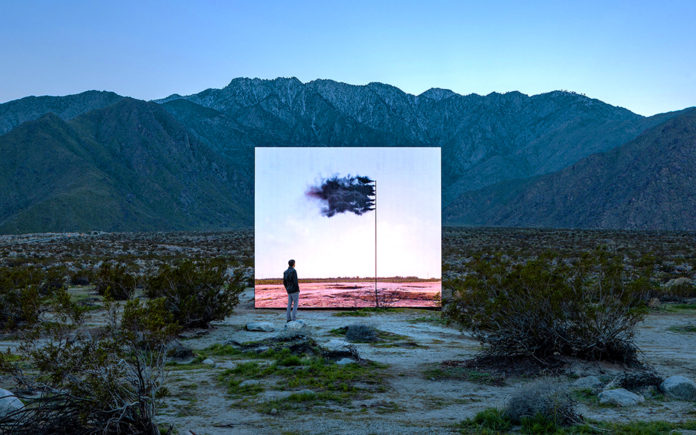 Irish born artist John Gerrad may not fit the definition of a millennial but he is clearly tapped into the digital age. He makes liberal use of computer programing and 3D graphics to give life to his work.

Gerrad’s works has a focus on the structures of power and the networks of energy that came of age in the last century. It is these technological advances that have, in some cases, impacted on the environment. Advances and dependency on energy and fossil fuels have created a boom and bust  – much like the history of Spindletop.  Energy has made lives easier but at what environmental cost? That question permeates Gerrad’s work.

Western Flag (Spindletop, Texas)sits at the base of the Tram Center Road in Palm Springs. The installation is a real time computer generated graphics film that depicts the first major oil gusher found in Texas, The Lucas Gusher at Spindletop, Texas.

As the 20thCentury began, Anthony F. Lucas was drilling in an area suspected of holding oil reserves. On January 10, 1901, at a depth of 1,139 ft., Lucas struck oil. The initial geyser blew oil over 150 feet in the air at a rate of 100,000 barrels per day. It took nine days before the well was brought under control. At that time the well had an initial flow rate greater than all of the oil wells in the United States. It produce over three million barrels its first year of operation and over 17 million barrels the following year. While the site is no longer significant in oil production it does stand as a milestone. Some believe that Spindletop was the start of the US and worldwide change to petroleum in the mass consumption of fuel.

Western Flag (Spindletop, Texas) is a digital simulation of the Lucas Geyser. The computer-generated spindle top runs in exact parallel with the real Spindletop.  What does this mean? Western Flag (Spindletop, Texas) is viewed in the real-time virtual world as the viewer was facing the geyser in Spindletop. In the projection, a flagpole spews out black smoke that is representational of carbon monoxide, which is invisible to the human eye. Carbon monoxide (CO) is a colorless, odorless, and tasteless gas that is toxic to any life form that that use hemoglobin (red blood cells) to move oxygen through their system. When too much carbon monoxide is in the air, carbon monoxide replaces the oxygen in red blood cells, which can lead to poisoning and death.

In his statement Gerrad notes that Western Flag (Spindletop, Texas) sits at the “gateway to the Coachella Valley and the city of Palm Springs Western flag acts a stark reminder not just of the willful exploitation and depletion of resources that millions of years ago covered this former sea floor with an abundance of life, but of the energy taken to return the deserted land to its current state of artificial habitation. The invisible gas responsible for climate change is here made visible. Flying the flag of our own self-destruction we are asked to consider our role in the warming of the planet and simultaneous desertification of once fertile lands.”

With climate change a contentious political topic, splitting politicians and scientists, the ultimate question remains – what will the viewer take away from Western Flag (Spindletop, Texas)?