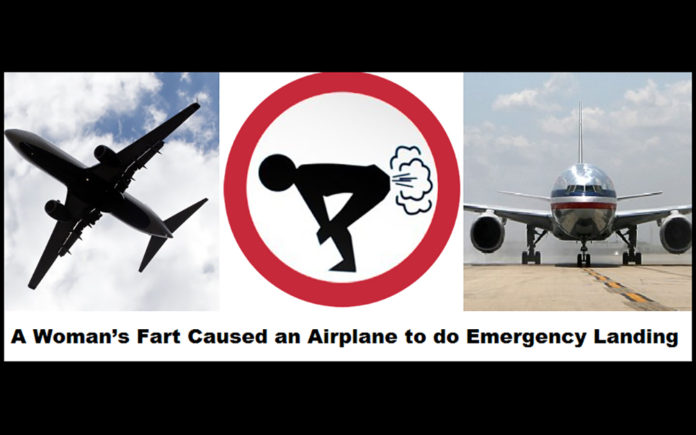 An entire plane was evacuated this week after a passenger passed gas. Apparently, the smell was so bad that it made people sick, and everybody had to vacate the aircraft.

Well, this made me think, which is dangerous because of my malady, Attention Surplus Syndrome. I think about things for too long. You know the acronym. It ties in nicely with this blathering…

I was thinking…did they really have to get everybody off the plane? Airplanes have oxygen masks; I’ve flown on a million flights and I’ve never seen them deployed. They should have used them after the gaseous incident on this flight instead of evacuating the plane.

The masks could have just dropped out of the ceiling, and people could have strapped them on, and problem solved! Flatulence is a big stinking problem on planes. People just let ‘er rip and who’s gonna know? Why not use the oxygen masks in cases like this?

The flight attendants could work it into their pre-flight routines. Usually they say, “If there is a reduction in cabin pressure, an oxygen mask will automatically appear in front of you.”

They could change their little speech to say, “If there is a reduction in cabin pressure, or if somebody has passed some really nasty gas, an oxygen mask will appear in front of you. Place it firmly over your mouth and nose, and then start looking for someone nearby who avoids eye contact, and give them a dope slap.”

There is a rare disease called gas incontinence, where folks can’t control their…well, let’s just say these people are involved in a gas-passing free-for-all. But it’s rare. Most folks know when the moment arrives. For instance, when a Dad tells a kid to pull his finger, he’s able to break wind on command.

Flatulence comes from the Latin word flatus, which means (seriously) “a breaking wind.” According to Wikipedia, the average person passes gas about 16 times a day. I don’t know who’s conducting these studies, but I can imagine a job like that must really stink…following people around all day, counting every time someone has a cheek squeak.

In France, in the 19th century, there was an entertainer named Le Petomane, who “held shows and did flatulence impressions.” I don’t know who the hell would pay to see somebody pass gas, but apparently the French did. And still do. There is a guy in France named Mr. Methane who carries on the tradition to this day. Seriously! I read it on Wikipedia so it must be true.

Flatulence in a space suit can’t be fun. I’ve always wondered how astronauts deal with the problem.

But apparently Buck Weimer of Pueblo, Colorado, came up with a solution. He received a patent (seriously) in 1998 for…are you ready for this, Slim People…an undergarment that contains charcoal. Apparently, the charcoal nullifies the smell, and although I’ve never seen a pair of charcoal drawers, they do exist.

If we could get people on airplanes to wear these odor-eating undergarments, it might help with the flatulence problem. And recycling these undergarments would be easy.

You could throw the charcoal drawers on the grill, light them on fire, and use them when you barbecue. You probably wouldn’t need any lighter fluid because all that trapped gas is flammable. But you would probably need a lighter with a really long handle in case there was a gaseous explosion.

Or you could just make flatulence illegal.

In 2011, in the African country of Malawi, the Minister of Justice, George Chaponda, proposed legislation called (seriously) The Air Fouling Act, which would have made passing gas in public against the law.

The bill didn’t…pass. But a lot of gas did!