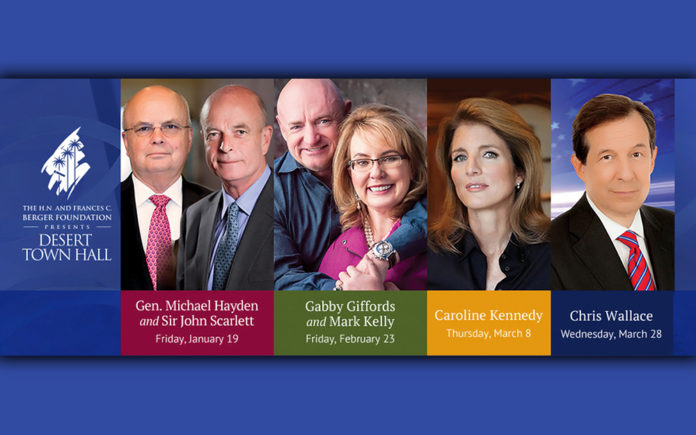 Michael Hayden and John Scarlett debut the 2018 series on Friday, January 19. This elite geopolitical duo looks at cyber security and geopolitical hot spots of the world. Retired four-star General Michael Hayden is the former director of the CIA and the NSA, and the author of “Playing to the Edge: American Intelligence in the Age of Terror.” As head of the country’s premier intelligence agencies, he was on the front line of global change, the war on terrorism and the growing cyber challenge. Sir John Scarlett is the former chief of the British Secret Intelligence Service (SIS or MI6), serving from 2004 to 2009. He joined SIS in 1971 and over the next 20 years served in Nairobi, Paris, and twice in Moscow, as well as several assignments in London covering the Middle East, Africa, Eastern Europe, and the Soviet Union. Together Scarlett and Hayden will speak on the delicate balance between liberty and security in intelligence work, as well the potential benefits and dangers associated with the cyber domain.

Following on Friday, February 23, is Gabby Giffords and Mark Kelly. Last season in 2017 Kelly’s twin brother and NASA Captain Scott Kelly spoke to a sold-out audience about his ground breaking year in space. Mark Kelly is also now a retired astronaut and U.S. Navy Captain, while Giffords is a former state legislator and U.S. Congresswoman. The two represent the very essence of American service and heroism. Ever since an assassination attempt severely wounded Gabby in 2011, the couple has inspired the world with their story of hope and courage in the wake of tragedy, serving as a symbol for the possibility of second chances.

On Thursday, March 8, Caroline Kennedy will share her insight about her experience as U.S. Ambassador to Japan from 2013 to 2017, while addressing why strong U.S. and Japan cooperation is so important for the security and prosperity of both countries going forward. She is an attorney and editor of nine New York Times best-selling books on constitutional law, American history, politics and poetry. She is a prominent member of the Kennedy family and the only surviving child of President John F. Kennedy and First Lady Jacqueline Bouvier Kennedy.

One of the country’s most prominent political journalists and the host of “FOX News Sunday,” Chris Wallace takes the stage to conclude the 2018 season on Wednesday, March 28. In addition to anchoring his program where he commands interviews with top White House officials and political candidates, Wallace also contributes to the channel’s “America’s Election HQ” coverage. Before coming to FOX, he served as a journalist for ABC News, a senior correspondent for PrimeTime and 20/20, and a White House correspondent and anchor on NBC News’ premier Sunday talk show, “Meet the Press.” He has also notably received every major broadcast news award including three Emmy Awards. On March 28, he will share his expertise and insights into current national and political affairs drawn from his prolific career interviewing numerous world leaders, politicians, celebrities, and athletes. He offers a rare perspective on how an investigative reporter operates, while delivering eye-opening takeaways from the world of television news and politics.

Desert Forum, Inc., a nonproﬁt 501(c)(3) educational corporation, produces Desert Town Hall. A portion of the cost of the tickets is tax-­‐deductible. The lecture series is sponsored by a number of local companies, organizations and philanthropic individuals.

Staff for the series includes Becky Kurtz, executive director; Maria Cross, director of operations; and Gina Irwin, executive assistant. Nearly 40 dedicated volunteers, many of whom have been with the series since its inception in 1993, help to make the series a success every year.