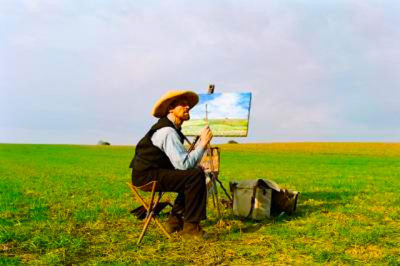 Julian Schnabel’s Van Gogh movie is much more than a standard biopic.  It’s a peek into the mind and world of an artist — an outsider — who, in spite of – or because of? – ridicule, rejection and illness, created some of the world’s most cherished, exquisite and valuable works of art.

Not only an accomplished and acclaimed filmmaker, Schnabel is an artist in his own right who for decades has claimed an affection and emotional connection with the Dutch artist. Luckily, his long friendship with actor Dafoe further informs and empowers his magnificent and memorable film.  Dafoe is spellbinding as the complicated and driven artist.  He won the Best Actor award at the Venice Film Festival – he was the jury’s unanimous choice.  Certainly, a harbinger of future awards.

Van Gogh says, “I am my paintings…  I see what nobody else sees.” This blissful, poignant and lyrical film transports us inside Vincent’s head and we begin to understand how his compulsion to paint was a kind of self-medication.  Artist friends tell me they draw and paint to stay sane, that they can feel a chemical change in their brains and find some temporary relief from anxiety and depression when lost in creating a piece of art.

I think Van Gogh would have agreed.  Was he truly mad or desperately sane?  Clearly he found that creating beauty was a perfect antidote to his mental challenges.

The extraordinary on-location filming, by French cinematographer Benoit Delhomme deserves mention and high praise.  The luminescent stream of striking images is the heart of the movie.

At least a dozen films have been made about Van Gogh.  But here we see him depicted in his final days as never before.  This wonderful film is a visceral argument for the necessity of art in our lives.  It may be the best of the films about art and an artist to date. 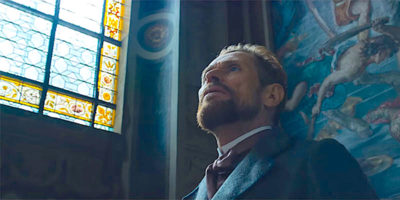 Memorable moments include the conversation at an asylum in Saint-Remy between Vincent and a priest (Mads Mikkelsen) who must determine the nature and severity of the artist’s illness.  Also touching is the brotherly love of Theo (Rupert Friend) toward Vincent.  When Vincent’s friend Paul Gauguin (Oscar Isaac) advises him to go south to Aries to paint, which he does almost immediately resulting in some of his most famous art.  There he meets Madame Seignoux (Emmanuelle Seigner) who helps him get established in the iconic yellow house he so perfectly captured on canvas.

When asked what he paints, Vincent answers, “I paint light.”   This transcendent film is awash in a sweet light that puts in perspective the overarching sadness of his life – and perhaps our own.  There’s a welcome spiritual dimension to this telling of the final days of Van Gogh’s short life that is sublime and appropriate.

Strongest recommendation.  Don’t miss this one on the big screen. 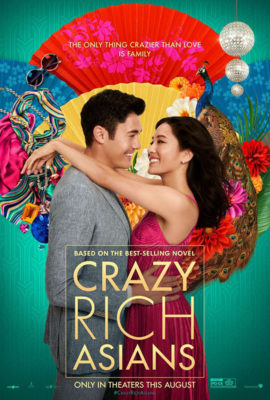 The only thing crazier than love is family.

Excited about visiting Asia for the first time but nervous about meeting Nick’s family, Rachel is unprepared to learn that Nick has neglected to mention a few details about his life.  Not only is he the scion of one of the country’s wealthiest families, but also one of its most sought-after bachelors.  Being on Nick’s arm puts a target on Rachel’s back, with jealous socialites — and worse — Nick’s own disapproving mother (Michelle Yeoh) taking aim.  You don’t have to be Asian to find solid laughs here.