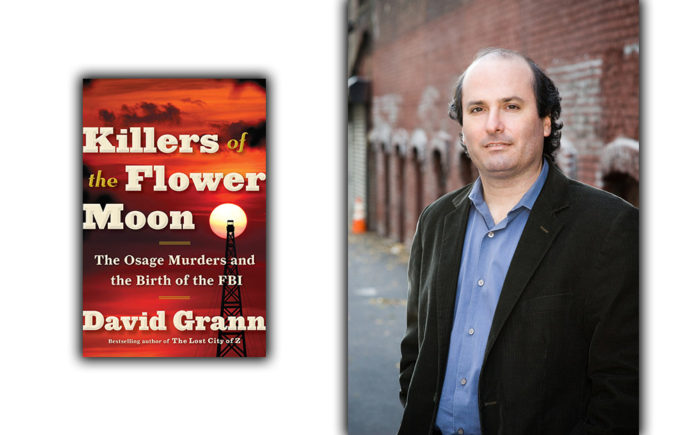 —–
Killers of the Flower Moon
by David Grann – Nonfiction
—–

As a kid, I learned that the first Thanksgiving was about pilgrims who arrived in America ill prepared and were saved from starvation by the generosity of indigenous people who shared their native foods.   The harvest dinner was a celebration of working together and communal survival.  In David Grann’s Killers of the Flower Moon: The Osage Murders and the Birth of the FBI (Doubleday, 339 pages), Native Americans are resented for their wealth and wisdom.

Author Grann begins the narrative nonfiction with Osage Indian Mollie Burkhart.  Her sister Anna has gone missing.  When she’s found shot, execution style, Mollie wanted to know who killed her, but there was no honorable or reliable law enforcement to investigate.  At the time, corruption was rampant and there was a national distrust of police forces.

Mollie and her white husband Ernest, hired private investigators to try and determine who was responsible and why she was murdered.

Soon, other Indians are found dead.  The murders rose to 24.  Many were directly related to Mollie.  Mollie’s mother was poisoned and her sister Rita and her husband were blown-up in their home.

In the 1920s, the Osage Indians were some of the wealthiest people in the world.  After their native land was taken by the US government, they were relocated to Oklahoma where there was oil.

The Osage owned the mineral rights.  The tribe and families made a fortune leasing their land to oil tycoons.  The Osage made $30 million a year ($400 million today).  They built mansions, had chauffeurs and servants.

The “white” community decided the Osage were not competent, especially Osage women, and should not be able to control their own money.   Men appointed trustees to manage Osage funds and their lives.  Because Mollie was married to a white man, he managed the family fortune divvying up cash as needed.

Private investigators got nowhere with the murder investigation.  Mollie and the Osage chief requested federal assistance.  J. Edgar Hoover, in his twenties, newly appointed to the Justice Department wanted to make a name for himself.

Hoover sent former Texas Ranger Tom White, to the Osage reservation.  White had undercover agents infiltrate the community working to solve the murders.  He even became a target himself.  Applying state-of-the-art techniques (for the time), like fingerprints and ballistics, he tracked down the killers and revealed a conspiracy to acquire the “earthrights” — mineral rights — of Mollie and her family.

Grann does a fabulous job dropping the reader into the world of the Osage Indians.  The terror they felt as friends and family were shot or poisoned was visceral.  Mollie knew she would be next, so she shut herself away where she became quite ill under the care of her husband.

The wealth of the Osage drew ne’er-do-wells, gangsters and con men.  Mollie and her husband had children together, and were married for years.  She could not believe that he could be part of a long-term con to get her money – but he was!

There are so many wonderful historical details in this book that fascinate.  I particularly loved the wisdom and spirituality of the Osage elders.  Sadly, their prayers were quickly disappearing with the new generation of rich Osage.

Grann’s research on the rise of private investigators like “Pinkerton” and the failed policing system were compelling as it all played a part in the horror of what was happening to the Osage.  Lawlessness and corruption allowed the murders to continue and be covered up.

Right when you think the book is over, Grann delivers even more shocking information.  In the final chapters, Grann uses his first-person voice to share his research.  He meets with the grandchildren of many of the victims and discovers that years before Mollie’s family had been murdered, there were others.  And they continued through 1930.

After five years of research, Grann speculates that at least 650 Osage were shot, poisoned or disappeared during the oil boom.  The greed of a few bad men not only stole their money and mineral rights, but also the lives and freedom of the Osage.

Having to prove competency, Mollie eventually went to court and fought for the right to manage her own money and won.

Later, most of the oil wells dried up and many of the Osage found themselves penniless, homeless and hungry — many of their trustees mismanaged or absconded with Osage money and property rights.

This holiday, I will give thanks for the generosity and wisdom of the Native Americans who saved the “white man’s ass” at their own expense.