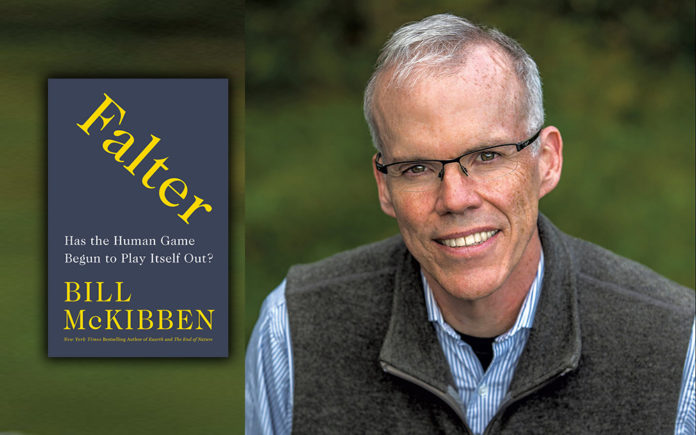 Our planet is spectacular!  It is an ideal place for our species.   We are fortunate to share this heaven on earth with a myriad of amazing creatures. Bill McKibben’s Falter: Has the Human Game Begun to Play Itself Out? (Henry Holt, 292 pages) asks if human beings are ready for the future and if we will even be there.

Author McKibben is the “New York Times” bestselling author of Eaarth and The End of Nature, which he wrote thirty years ago about the dangers ahead for humans if we continued to spew copious amounts of carbon dioxide into the atmosphere.  He was one of the first to report on global warming.

Three decades later, McKibbon shares how much worse it is and the horrors that are ahead – and happening currently — since the climate has indeed changed.

According to the author, at this moment, we emit 40 gigatons of carbon dioxide annually.  That’s more than any other prior earth extinction event!  Biological annihilation is well under way with half the planet’s individual animals already lost.

As temperatures continue to rise, there will be more global famine and mass migration as areas around the planet become uninhabitable.  Human beings will be forced to move to other cities and countries creating environmental refugees, which generates economic disasters, which in turn reduces resources and human dignity. If rising temperature is bad, rising tempers become just as dangerous.

McKibben isn’t fear mongering or preaching to the reader — he is 30 years beyond that!  Rather, he is sharing what our environmental reality is now and what it means to be human in this part of the planet’s timeline.

After giving the reader a clear and easy to understand science and history lesson on carbon dioxide, he shares the existing global catastrophes we don’t see on the nightly news.  I admit it is tough to get through.  It is a downer, however, it is an eye opener and is less than a third of the book’s focus.

McKibben really gets going in part two, “Leverage,” when he calls out the fossil fuel industry and names names.  He spells out the history of the industry and its desperate desire to generate profits above human dignity and the planet’s welfare.

I went from sad to mad!  These are bad people who do very bad things with their extreme wealth to keep fossil fuels cooking.  Our President, is a tool, a pawn in their selfish, one-percenters, Ayn Randian, do nothing, get all you can, game. These old white men are on the wrong side of history and the planet.  Some day, they will be held accountable.

Faulter moves from the oil moguls to the tech giants.  McKibben shifts from those responsible for the ongoing environmental disaster to those who have ideas about saving human beings from extinction.  This came as an unexpected surprise.   The author reports on the latest in bioengineered humans to the reality of living forever, and the Artificial Intelligence that will replace us and rule the world.

This is mind-blowing information! AI is poised to make human beings obsolete.

What makes Faulter a must read is McKibbon is not without hope.  He believes in the human race and its ability to organize and quickly come up with solutions.  He believes two factors can change our dire course: solar power and nonviolent protests.

This is an important book.  If you are a climate denier or an environmentalist, McKibben writes from a responsible place of purpose and compassion for all living things.  He concludes that what is truly important is human solidarity and love.

Regarding our present world, and what truly overwhelms him: “The human love that works to feed the hungry and clothe the naked, the love that comes together in defense of sea turtles and sea ice and of all else around us that is good.  The love that lets each of us see we’re not the most important thing on earth, and makes us okay with that.  The love that welcomes us, imperfect, into the world and surrounds us when we die.  Even, especially, in its twilight, the human game is graceful and compelling.”

Why do we exist if not to love one another and care for our planet and its magnificent life forms?